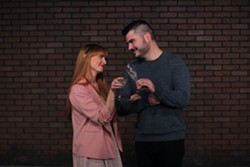 Radiant Vermin. This modern morality play with a darkly comic twist has been called "nasty and energetic fun" by the New York Times. It tells the story of a young couple who is offered their dream house by a mysterious stranger, and then forced to answer the question of just how far they're willing to go to get it. Director Maryann Green says the show is about greed but also about the slippery slope of abandoning your morals for what seems too good to be true. Preview shows at 7:30 p.m. on Thursday, Feb. 20, and Friday, Feb. 21. Opening night 7:30 p.m. Saturday, Feb. 22. Shows at 7:30 p.m. Thursday through Saturday and 3 p.m. on Sundays through Saturday, March 28 (with a special matinee on closing day). Live Theatre Workshop, 5317 E. Speedway Blvd. $20 GA, $18 military/senior/student, $15 Thursdays and previews.
click to enlarge

Tucson Roadrunners vs. Stockton Heat. Head on down to the hockey rink for this week's home games! Friday is 1, 2, 3 Night, with $1 soft drinks, $2 hot dogs and $3 beers, plus the T-Mobile 55+ night. On Saturday, the Roadrunners will be wearing their Kachina jerseys, and the first 1,000 kids (ages 14 and under) to arrive will receive their own free Roadrunners Youth Jersey! Save your ticket for the Saturday game, and, once the Roadrunners win, redeem it at the Tucson Arena box office to get a free ticket for Wednesday Feb. 26. 7 p.m. Friday, Feb. 21, and Saturday, Feb. 22. Tucson Arena, 260 S. Church Ave. $12 to $61+.

Mardi Gras Masquerade Ball. If you've ever been to Mardi Gras, you probably had a blast. If you've ever seen photos of anyone at Mardi Gras, they probably looked like they were having a blast. So, seize this opportunity to go all-out at a masquerade ball with Cajun food, Cajun musicians, specialty drinks and—of course—plenty of beads. Your ticket includes food, two drink tickets, entertainment, dancing, a souvenir photo and some. Did we mention proceeds benefit the Hero Support Charity? Not to be missed! 7 p.m. to 11:55 p.m. Friday, Feb. 21. Tucson Mardi Gras, 1102 W. Grant Road. Tickets start at $175. 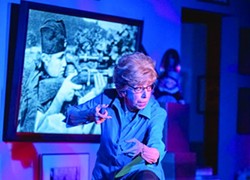 Becoming Dr. Ruth. If you like shows with strong sexual content appropriate for mature audiences age 13 and up, we've got a show for you! But also, if you like shows that are fascinating, inspiring and hilarious, we've also got a show for you. Well, Invisible Theatre has a show for you. This play by Mark St. Germain is about the radio and TV sex therapist Ruth Westeheimer. Who is also a Holocaust survivor. And a former scout and sniper with the Haganah in Jerusalem. And someone who traveled to the United States as a single mother. You'll be amazed at what you learn! This show was originally running the first half of the month, but it was such a success that they've added more shows. 7:30 p.m. Wednesday, Feb. 26, to Friday, Feb. 28, and 3 p.m. Saturday, Feb. 29. Invisible Theatre, 1400 N. First Ave. $35.

Singin' in the Rain. If you're a fan of the sweet love stories, technicolor costumes and showstopping numbers of classic musicals, there's nothing quite like Singin' in the Rain. Set in the 1920s, the show tells the story of a group of performers dealing with Hollywood's move from silent films to "talkies." Pima Community College's production of the show is sure to be a crowd-pleaser. On opening night Thursday, they've got pre-show activities, refreshments and prizes starting at 6:30 p.m. Singalong shows are Friday, Feb. 21 and Feb. 28, and an ASL interpreter is present on Thursday, Feb. 27. Show runs through March 1. PCC Center for the Arts Proscenium Theatre, West Campus, 2202 W. Anklam Road. GA $18 to $24, or $12 for PCC students. 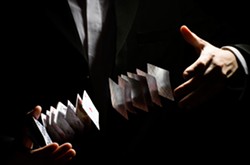 An R-Rated Magic Show with Grant Freeman. There's always something kind of sexy about magic shows. And, if you're a certain type of person, there's something spooky about magic shows, too. What the hell just happened? Where did he go? Where did that fire come from? Did she just get cut in half?! This show tries to embrace all the non-kid friendly elements of magic acts with a production they promise will have you saying, "what the *insert your profanity of choice, because there's no kids around anyway*!" Your mind will be blown, and your stomach muscles will be sore from all the laughter. 8 p.m. Tuesday, Feb. 25. Leo Rich Theater, 260 S. Church Ave. $20 to $36+.

Black Renaissance: Hotel Congress Takeover. Have you been keeping up with this month's Black Renaissance events, which celebrate the contributions of black artists to popular culture? If not you've totally been missing out, but here's another chance to jump in. Head over to Congress Friday for a night full of music. El Tambo and DJ Lady Staliet have got afrobeats on the outside mainstage, while Mattea, Stevie Rose, ASKE and more artists will be playing R&B and hip hop inside. You're gonna wanna be there, trust us. 8 p.m. to 2 a.m. Friday, Feb. 21. Hotel Congress, 311 E. Congress St. Free. 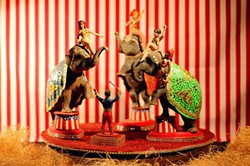 Behold the Big Top: Jean LeRoy's Circus Parade. If you've ever been to the Mini Time Machine Museum of Miniatures, you know that pretty much all miniatures are marvelous wonders to behold. This exhibit full of hand-carved folk art depicts the circus of Madison Wisconsin's Main Street in the 1930s, so we've got circus magic coming together with miniature magic. The pieces were all carved by Jean LeRoy, who was once a clown in the Cole Brothers' Circus, but later went on to make a living as a miniature artisan. Eventually, he settled in Tucson in the '70s, where he opened a museum in Trail Dust Town. Exhibit open through May 10 at the Mini Time Machine Museum of Miniatures, 4455 E. Camp Lowell Drive. Hours are 9 a.m. to 4 p.m. Tuesday through Sunday. $10.50 GA, $8.50 senior/military, $7 students/youth ages 4 to 17, free for kids 3 and under.

How to Talk to Trees. Have you heard of Subspace Collective? Built by and for emerging artists, the collective has been around for about two years, operating a small art venue in the basement of the historic Steinfeld Warehouse. This weekend, they've got their very first juried exhibit, exploring the relationship between humans and the natural world. You'll get to see multimedia works by local artists and show your support for what they do just by showing up. What a win-win! 6 to 10 p.m. Saturday, Feb. 22. 101 W. Sixth St. Free.

Spring Ikebana Festival. If you don't think Ikebana, the Japanese art of floral arranging, is a gorgeous and special art form, then—no offense—you're probably just wrong. This tradition dates back to the seventh century, and one of the translations of "ikebana" is "making flowers alive," which is just...so sweet. Come see dozens of floral compositions in a variety of styles at Yume Japanese Gardens throughout the week for this fantastic floral festival. Thursday, Feb. 20, to Saturday, Feb. 29. Hours are noon to 5 p.m. Sunday and 9:30 a.m. to 4:30 p.m. Thursday through Saturday. Yume Japanese Gardens, 2130 N. Alvernon Way. $15 adults, $5 kids under 15.

Philabaum Gallery: Tapestries in Glass. If you think about it, much of art is just the work of making things look like other things—making paint look like a tree, for example, or making copper look like the shape of a person. But Montana-based artist Richard M. Parrish's tapestry panels, bowls and trays are especially good at making glass look like fabric. He uses linear patterns of glass strands to bring softness to a hard medium and explore the intersection of the organic and geometric. Come see some of his gorgeous work on exhibit at the Philabaum Gallery, on display through May. 10 a.m. to 5 p.m. Tuesday through Sunday. Philabaum Glass Gallery and Studio, 711 S. Sixth Ave.

42nd Quilt Fiesta. This sounds like exactly the kind of cozy party I want to go to. And it's going to be beautiful, too! The Tucson Quilters Guild started with 10 women back in 1976 and has since grown to more than 450 people. They've got a small quilt auction! They've got a professional quilt appraiser (a real certification that exists!) on deck to appraise your quilt! Last year, they gave out prizes ranging from "Best Hand Applique" to "Best Use of Color." 9 a.m. to 5 p.m. Friday, Feb. 21, and Saturday, Feb. 22. 10 a.m. to 4 p.m. Sunday, Feb. 23. Tucson Convention Center, 260 S. Church Ave. $10 per day or $20 for all three days.

For a Good Cause

Sorry Party // Dirt Friends–Australian Wildlife Relief Show. Sometimes it feels like there's so much bad stuff going on in the world that we're powerless to do anything about. So when a chance, comes along that makes it simple to contribute to a good cause, we always get excited. When that chance involves an indie rock concert at Gentle Ben's, by LA band Sorry Party and Tucson band Dirt Friends, even better! You get to enjoy a concert, but in lieu of a cover, they're collecting donations for WIRES Wildlife Rescue. What could be more rock and roll? 6 to 8 p.m. Friday, Feb. 21. Gentle Ben's, 865 E. University Blvd. No cover, but donations (obviously) welcome.

Southern Arizona Transportation Museum Lecture Series. It's time to learn more about trains in this monthlong lecture series at one of downtown's most charming museums. This week, Mike Bording will be telling you all about the Golden State Passenger Train. This puppy operated between Chicago and Los Angeles through the first half of the twentieth century, and, at more than 2,300 miles, was one of the longest continuous passenger railroads in the United States. 3 p.m. Sunday, Feb. 23. Southern Arizona Transportation Museum, 414 N. Toole Ave. Free. 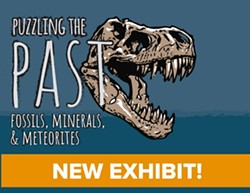 Puzzling the Past: Fossils, Minerals, and Meteorites. Planetariums are places where we look at celestial bodies thousands of lightyears away. This new exhibit at Flandrau explores the Earth's geologic history, giving us the opportunity to look at events that happened thousands of years ago. See a giant T-Rex skull, gems and minerals and trilobites while you learn about everything from the dawn of life to the rise and fall of the dinosaurs. Test your wits with hands-on puzzles throughout the exhibit. Exhibit opens Friday, Feb. 21 at the Flandrau Science Center & Planetarium, 1601 E. University Blvd. Hours are 9 a.m. to 5 p.m. Monday through Thursday; 9 a.m. to 10 p.m. Friday; 10 a.m. to 10 p.m. Saturday; and noon to 5 p.m. Sunday. $16 adults, $12 kids 4 to 17/senior/military/college students, free for kids 3 and under.

Astronomy Night for Little Rangers. Look! Up in the Sky! It's a star! It's a black hole! It's a future career in STEM! It could be any of these things at this night full of telescope observation and hands-on activities at Saguaro National Park's Rincon Mountain District (East). The Tucson Astronomy Association is providing the telescopes, and there are also games, crafts and information about everything from alien worlds to careers in science. Perfect for kids ages 8 to 12. REGISTER IN ADVANCE by calling the Rincon Mountain Visitor Center at 733-5153. 6 to 8:30 p.m. Thursday, Feb. 20. Saguaro National Park, 3693 S. Old Spanish Trail.

Cat Meditation Class. Have you been to El Jefe Cat Lounge yet? For cat lovers, it's three stories of cuddly bliss. The lounge partners with Hermitage Cat Shelter to bring healthy, even-tempered cats to hang out with the public. If you fall in love with one while you're visiting, they're all up for adoption! Come have your kitty cuddles with a side of mindfulness at this event, where you can meditate right alongside the stars of the show. Bring a yoga mat or blanket (or rent one while you're there). And hey, maybe you'll find your Nirvana in a cat and end up taking one home. 10 a.m. Saturday, Feb. 22. El Jefe Cat Lounge, 3024 N. Campbell Ave., Ste. 141. $20.

TMC Sunrise at Old Tucson Trail Run. There's something uniquely hopeful about getting up early and actively watching the sun rise. Like forcing yourself to do this combination of living in the moment and looking forward to the day ahead. So, watching the sunrise at Old Tucson is like living in the past, present and future all at once, right? There's a four-mile trail run, or a one-mile version, both of which take you through the dusty Main Street of Old Tucson Studios. Then, enjoy free admission to the park for the day! First race starts at 8 a.m. Sunday, Feb. 23. Old Tucson Studios, 201 S. Kinney Road. $50.
© 2022 Tucson Weekly