University of Arizona hockey back on track 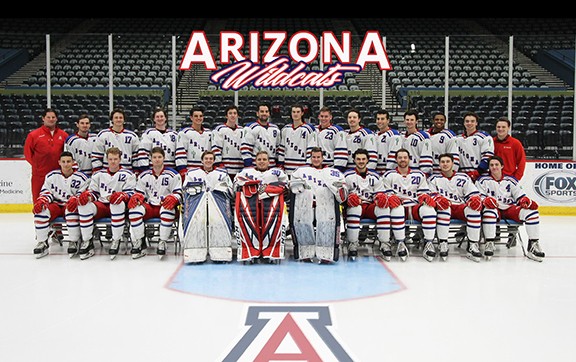 courtesy photo
The UA Hockey Team
University of Arizona hockey is no longer on thin ice.

After years of decline and near collapse, the team has re-emerged stronger because of re-energized organizers, increased media exposure and more wins.

"It's just a great environment," said Camden Armstrong, a senior defenseman. "You just can't beat our fans... Fans are starting to come back and starting to love it again and that's all we can ask for."

It wasn't always so. Between 2011 and 2016, organizational and financial difficulties fueled concerns that the program that has existed in Tucson since 1979 would no longer be viable. Poor on-ice performance and dwindling attendance plagued the team.

"For us to give up our hockey program with the legacy like we have would be devastating," Hauff said. "It would be inexcusable."

Hauff, who oversaw the financial restructuring of the organization, recalls the height of UA hockey during the "Icecats" era, which lasted from 1979 to 2011.

"If there was not a basketball or football game, everyone went to cheer on the Icecats," Hauff said. "There would be 5,000 or 6,000 people at the Tucson Convention Center."

In 2011, the university took charge, and placed the team under the campus recreation department in a rocky transition, as interest in the team had dwindled over time.

Coach Chad Berman, hired in 2014, said he witnessed the turbulence that the program encountered after its shift to university control.

"Most people believed that the program could not succeed as a business," he said.

The Roadrunners' arrival in Tucson in 2016 further complicated matters. Along with competing for ice time, the Roadrunners contract with the city stripped away UA hockey's advertising rights at the Tucson Convention Center.

Timothy Gassen, a former journalist who passed away in November, led media relations to give the team more exposure. Director of Campus Recreation Troy Vaughn, assisted by student coordinator Tanner Harris, advocated on campus for the sport.

"At the end of the day, our primary goal is to get people in those seats and to make students aware that we have a hockey program," Vaughn said.

For the team to grow and succeed, there had to be a refocusing on marketing and promotion.

"Being a hockey coach was not enough," Berman said, realizing the necessity to personally establish corporate sponsorships, partnerships and community events.

Vaughn said he thinks there is potential for the team to be a resource for Campus Recreation, and maybe a turn a profit.

The UA hockey alumni foundation has supplemented the budget during the years the team was unable to generate sufficient revenue, Vaughn said.

The total budget for the team for 2019 is $253,700, short of breaking even by about $35,000. Annual deficits ran $85,000 in previous years. To save money, the team no longer flies to away games and instead uses buses. Also, a better contract, based on attendance, was negotiated with the convention center.

Vaughn said he sees the hockey program as a way to create revenue for Campus Recreation, which currently has a total budget of $12.5 million.

Varsity athletics, such as football and basketball, are revenue-generating sports that offset the cost and budget for other campus sports programs. Vaughn said he hopes hockey can function in the same way.

Future profits could pay for student activities that currently require fees, such as fitness classes and personal training.

Hauff and Vaughn said a significant impediment to the program has been a lack of awareness within the Tucson community and student body. That has started to change.

Media Director Gassen had been a critical component in revitalizing the team's presence on radio, social media and television. The team also is planning to start advertising on the WhatsupTucson Twitter account, which has 100,000 followers, Vaughn said.

Yvette Damon, the sponsorship coordinator for the program, brought in IHeart Radio for on-air promotions, and has approached The Daily Wildcat to increase exposure.

"I can't tell you how many times people would come up to me and say 'I had no idea there was still hockey in Tucson,' and this is because we started doing radio and television promotion again," Hauff said.

Hockey is an expensive sport to play, especially as the Tucson Convention Center offers the only facility.

Data provided by Campus Recreation shows that the 6,791-seat arena costs the team roughly $3,500 a game to cover concession workers, security, and other staff.

Games against the team's rival ASU dominate the attendance figures, with 3,265 in attendance, while some games attract as low as 151 attendees.

Six games against ASU over three weekends in the 2018-2019 season constituted 90 percent of the revenue generated for all home games, according to UA Campus Recreation.

Hauff said a partnership agreement with the Roadrunners allows the UA to schedule all of their games hosting ASU on weekends to help guarantee higher attendance.

Hauff said there is a need to continue to build the relationship between the Roadrunners and UA hockey. A ticket package deal is in place that allows the purchaser of a Roadrunner ticket to attend a UA hockey game on the same day. A portion of the revenue goes to the UA hockey program.

Also, this year Campus Recreation implemented a promotional strategy to engage more students by providing free admittance to 1 p.m. games with a CatCard. Vaughn said he hopes that by eliminating the cost barrier, more students will be willing to attend.

On-campus outreach has always been a major focus, student coordinator Tanner Harris said. Harris sets up booths on the UA mall during the semester and operates a booth at the Bash at the Rec event to welcome new students.

Harris said the team serves as a major resource to the Tucson community outside of the rink.

The team won the American Collegiate Hockey Association community service award out of 450 teams in 2016-2017 and 2018-2019 for community outreach through events such as Pink the Rink, which raised $10,000 for the cancer center, and Paws and Pucks night to support the Humane Society.

The program's success so far, though, has left Berman far from satisfied. He said he is determined to create a championship culture in UA hockey.

For current players, the program means more than just a chance to continue playing the game they grew up with.

"This team gave me a family," Armstrong said, who is from Newburyport, Massachusetts.

Anthony Cusanelli, the team's captain, was the first UA Wildcat hockey player in the program's history to represent his country for Team USA at the World University Games in 2019.

He was one of 22 players chosen from around the nation and he said he hopes he can pave the way for future UA hockey players to continue to put the program on the international stage.

Hauff said he's happy for the progress, but challenges still lie ahead.

"It's important for us to have a club hockey program," Hauff said. "We were one of the original founding members of the American Collegiate Hockey Association in 1991. The trick is to realign expectations, business model and outcomes for a 2020 society and Tucson community."

Sebastian Janik, a master's student in journalism at the University of Arizona, reported and wrote this story for a reporting class.