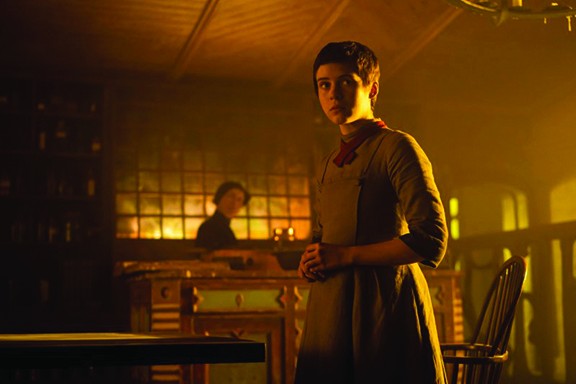 Robert Eggers is two films into his career, and people are already trying to rip off his style.

Coming off like a low-rate The Witch, Gretel & Hansel shoots for the slow burn, deliberately paced, lushly photographed style that Eggers employed in his 2015 masterpiece. While director Osgood Perkins has put together a movie that looks OK, the script by Rob Hayes provides little to nothing in the way of chills. The movie is all atmospherics with little substance.

On the verge of starvation centuries ago, Gretel (Sophia Lillis) is kicked out of her home with little brother Hansel (Sammy Leakey) in tow. They head into the forest where the only meal they have is hallucinogenic mushrooms (yes, they trip out) until they come upon a house inhabited by a strange old lady named Holda (Alice Krige).

Holda is all by herself without a supermarket in sight, yet her table is full of freshly baked and roasted goodies. Hansel and Gretel, just like the fairytale, settle in for some good country cooking. Little do they know that the obviously totally evil Holda (I mean, look at her, she's definitely a witch) has nefarious plans for the two that involve a different kind of mealtime.

As the kids mull about the house and stuff their faces, Holda seems to have some sort of witch training future in store for Gretel. Gretel has "visions" that suggest she could have witchcraft in her blood, so Holda encourages her witchy woman side while Hansel moves closer to the roasting oven. Will Gretel get ahold of herself before Hansel achieves an uncomfortable alliance with parsley, sage, rosemary and thyme? Trust me, you'll be so bored you won't give two shits.

You won't be scared, either. There are a couple of foreboding shots involving a witch standing in a pinkly lit forest, and one involving entrails changing into baked goods, that register potential. Otherwise, the film is mostly two kids talking to each other about scary things, and the same two kids walking around in the forest and the house where things should get scary but don't.

In an effort to make more money, Orion Pictures and Osgood have gone with a PG-13 cut for the movie, which makes no sense. There's nothing about this movie that would appeal to 13 and under fans. Lillis was one of the stars of It, which was a hard R, so her fans are used to not being allowed to see her movies. An R rating could've generated some creeps and scares where this movie chickens out.

Lillis is good here, even though her role is almost a complete copy of the one played by Anya Taylor-Joy in The Witch. Krige has the makings of a scary witch, but she's required to do little more than sit at a table and speak ominously.

As for taking a classic, potentially scary tale and generating some terror, that mission has failed. You would think that kids being roasted and eaten in an old lady's oven would be fright city, but nope. This one is about as scary as a jar of pitted olives.

The film is flattering to Eggers in that it's proof that the man has already established a genre style (that of the gothic horror filmed awash in greys and browns), and somebody is trying to ape it the way a lot of '90s directors tried to rip-off Quentin Tarantino.

On the bright side, the film is much better than the Jeremy Renner vehicle, Hansel & Gretel: Witch Hunters. That will perhaps always stand as the worst adaptation of the story. Gretel & Hansel is just boring bad, not bad to the core. Still, bad is bad, and horror fans need not waste their time.