Nathan Thompson Avelino is the palate behind Whiskey del Bac 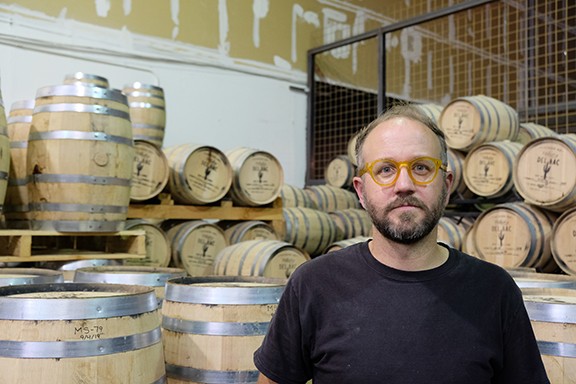 "Some kids were into skateboarding; I was into what makes a perfect carne asada marinade," said the 38-year-old Tucson master distiller. For Thompson Avelino, carne asada's ideal flavors include bitter orange, lime, cilantro, onions, Mexican oregano and a distinct char from a grill's hard sear.

Picking apart flavors and evolving the palate has been his life-long process, and now he's raising capital to open his own distillery, Low Desert Spirits, by the end of this year.

The smell and taste of the desert drives his new venture.

Growing up in mesa, thompson Avelino recalls the scents of orange orchards and the Salt River. "The taste of those oranges from my childhood is a dragon I am always chasing down," he said.

He grew up with an orange tree in his backyard, and his grandfather grew 20 grapefruit trees. The oranges were Diller Arizona sweet varietals, and are incredibly juicy, super sweet and have smooth skin, Thompson Avelino said.

At 11, he would spend days running around the neighborhood, picking and eating oranges with his friends. "Nothing can compare to how good something is in your memory—nothing can compare to the nostalgia," Thompson Avelino said. "The human sense most tied with memory is smell and the desert is incredibly aromatic."

Breaking down flavors and dissecting the components that create these flavors is a defining factor of what has made Thompson Avelino a master blender and distiller.

"The cool thing about spirits is how it brings people together in time, space and culture, drinking together is a communal act," Thompson Avelino said.

His palate development continued as a bartender while working on a history degree at Northern Arizona University, from 2000 to 2004.

"I was intrigued by wine and spirits but it was just for fun," Thompson Avelino said.

While bartending, he said his favorite drink to make was a simple gin and tonic. However, he said, people thought it was a boring drink, so he decided to craft his own tonic water using lemongrass, Chona bark and allspice.

"I enjoyed the process of making something simple into something complex."

Following his graduation from NAU and a stint at a law firm, he attended Scottsdale Community College film school from 2008 to 2010.

"I saw what you would have to do to make being a lawyer a reality, I knew that it wasn't who I was and wasn't what I wanted to do in the long run," he said.

Mike Peterson, a friend from film school, first introduced him to home brewing, so Thompson Avelino bought a make-it-yourself kit from Urban Outfitters in Phoenix to brew one-gallon batches of beer at home.

"In hindsight, it was just something to do and a way to forget about stuff," Thompson Avelino said. Even as a novice, he said he was not satisfied with the flavors he was creating, and he began picking apart his home brews.

When it comes to beer, Thompson Avelino said he prefers a hoppy bite. In his home brewing, he began experimenting with balancing different types of hops to create different flavor profiles. A career in dissecting flavors was not in Thompson Avelino's sights but his palate began developing another layer.

Foregoing a career in film, Thompson Avelino decided to seek a job at a restaurant, "a life-changing time on so many levels," he said, working for head chef Nobuo Fukuda at Nobuo at Teeter House in Phoenix, starting in 2010.

"I stalked Nobuo out aggressively," he said. Before Nobuo first opened, it had no website and no phone number. Day after day, he waited with resume in hand to bump into someone who was involved with the restaurant. His determination paid off as he was one of the first hires.

Nobuo's smelled of sake, soy, kombu, mirin and dried mushrooms, he said. "Nobuo unlocked white wines for me. I started to drink white wines from Burgundy, old-world whites that have a balance of acidity and minerality combined with in-your-face floral notes," Thompson Avelino said.

Regular customers would gift Thompson Avelino and his coworkers glasses of wine they themselves could not easily afford. The staff would then roundtable taste them to break down their flavors as an educational exercise. Nobuo taught Thompson Avelino to drink with intention, using palate as memory and distinguishing different tastes through comparison.

At the end of his shift, Thompson Avelino and Nobuo would drink Sapporo beers while counting down the drawer and cleaning up, discussing flavors and ingredients, Thompson Avelino said. For him, one dish that exemplified the possible complexities of flavor was Nobuo's grapefruit and hamachi, with local grapefruit, ginger, yuzu and homemade ponzu sauce.

"It was just such an amazing bite," Thompson Avelino said. "It combined so many flavors and was so fresh and satisfying."

After working for Nobuo and further expanding his palate, Thompson Avelino said he wanted to escape Phoenix and get away from the developers putting up faceless, soulless subdivisions.

Nathan and his wife Marlene Thompson Avelino took a trip to Tucson in 2013.

"My wife and I had been traveling all over to different beer brewing communities but I couldn't find any work and then we decided to visit Tucson," he said. "The moment we knew this was the place for us was a simple cactus growing out of the concrete that we noticed one evening during sunset."

Thompson Avelino said there was a beauty in the cactus because it was growing where it was not supposed to. This moment of the cactus in the orange glow of the fading light of a Tucson evening inspired him to make the move impulsively, he said.

Darren Clark, Thompson Avelino's uncle and a longtime Tucsonan, happened to be the neighbor of an up-and-coming whiskey distiller, Stephen Paul, who founded Whiskey Del Bac. Thompson Avelino described meeting Paul as serendipity rather than a planned occurrence. Paul had been experimenting with mesquite-smoked malt and Thompson Avelino said he found the idea intriguing, if not weird.

Mesquite is a defining smell of the desert and he was interested in finding a way to create a spirit that evoked that essence.

"The majority of the smell comes from Sycamore trees and there is the smell of the creek bed. The smells of creosote, sage and the seasonal Arizona waterways," Thompson Avelino said.

He said they first met in Paul's wood-working shop when the distillery was in its infant stages. Paul said that Thompson Avelino worked without pay for months helping to get the operation off the ground because he believed in the project.

His palate would be a key to the success of Whiskey del Bac. Paul said that this is a talent that is both learned from years of experience and a natural skill.

Paul described Thompson Avelino as having a universal palate capable of adapting and growing, no matter the genre.

Thompson Avelino said with the smoked single malt Dorado, he gradually reduced the smoke levels and by peeling back the smokiness revealed a sweeter profile that fine-tuned the product. "Above all, Nathan is responsible for how great our whiskey tastes," Paul said. What began with a 40-gallon still in Paul's wood-working shop in 2013 would grow into the award-winning Whiskey Del Bac today at 2106 N. Forbes Blvd.

"At a startup, when you need money yesterday, Nathan was always committed to only bottling the best product even when the financial pressures were heavy," Olivas said.

For Thompson Avelino, the goal of his new distillery venture focuses on more than just producing botanical spirits inspired by the desert. He is excited to open the distillery in Tucson, although no location has been decided yet, by the end of 2020.

The said the product will reflect his taste of Arizona.

In the desert, Thompson Avelino said there is a distinct smell of the first rain drops as they hit the hot earth, creosote and sage pervading the air, these are his memories of growing up in the desert.

"Nostalgia is a big part of the philosophy of the distillery," he said. "It is a way to capture our own personal nostalgia and convey these smells for people who maybe have never experienced the desert."

Sebastian Janik, a master's student at the University of Arizona, reported and wrote this story in a reporting class.