By Emily Lyons, Taming of the Review 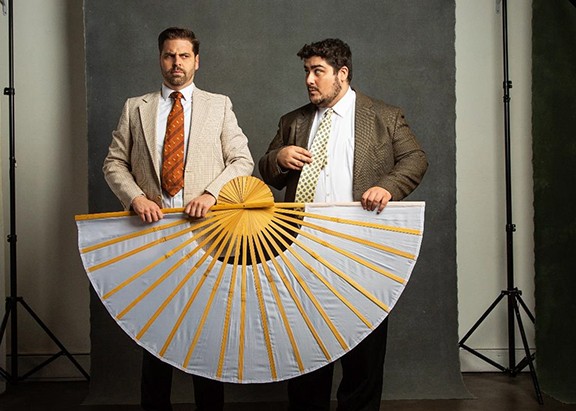 Hot Mikado puts a swing-era spin on Gilbert and Sullivan's 1885 operetta, but aside from reworking Sullivan's music in a different style and updating some of the dialogue, the familiar story is largely unchanged. Nanki-Poo (Christopher Esguerra), son of the Mikado (Matthew Holter) and heir to the throne of Japan, has fled the court and the aggressive attentions of Katisha (Jaqueline Stewart), an elderly court lady. Disguised as the second trumpet in the Titipu town band, he has wandered far and wide in search of his beloved Yum-Yum (Aliyah Douglas), with whom he reunites only to discover that she is shortly to be married, albeit unwillingly, to Ko-Ko (Tyler Wright), the recently appointed Lord High Executioner. We learn that Ko-Ko acquired his title through a loophole in the Mikado's law declaring flirting a capital offense. Nevertheless, to satisfy the Mikado's order that someone must be beheaded, "a victim must be found," and soon. This creates a series of complications for romantic rivals Nanki-Poo and Ko-Ko, and their would-be bride Yum-Yum.

Before I get into reviewing this production, I have to confess that I was both curious and a little nervous about this assignment. I was curious because, although I am a diehard Gilbert and Sullivan fan and could probably sing the entire score of the original The Mikado from top to bottom, I was only vaguely aware of Hot Mikado.

As much as I love The Mikado, it is, at best, a problematic choice in 2020. Many historic (and sadly, even some recent) productions featuring largely white casts have leaned into the script's offhand caricaturing of Japanese culture and gone full yellow-face, rendering the productions cringey and unwatchable now. So, I was nervous about how SAPAC would navigate the ridiculous and orientalist version of Japan, and also how a 1940s jazzy update might further compound the material's inherent problems. David H. Bell and Rob Bowman's Hot Mikado is reconstructed from jazz-infused, all-black productions of The Mikado dating from the heyday of the Harlem Renaissance. My question going into the show was, how do you pull this off with a majority white cast and band without teetering into cultural appropriation and minstrel show territory? Consider these issues, but I'll leave it to you to judge what is appropriate or not. I will say that I think director Kelli Workman was wise for choosing to take a minimalist route with set design and costumes that mostly avoid overt references to either Japan or the Cotton Club.

Happily, Hot Mikado is a very silly play that manages to mostly transcend its baggage. I found myself smiling broadly starting from Nanki-Poo's debut in "A Wand'ring Minstrel I" until the show's finale—and only raised my eyebrows a couple of times.

With a premise this absurd and jokes that can seem dated, the directing, especially regarding physical comedy, can make or break the show. My hat is off to Kelli Workman, assistant director/choreographer Thea Hinojosa, and assistant choreographer Jessica Lumm for their inventive and humorous direction. There's one bit in "I Am So Proud" that makes me cry-laugh to remember: the song was so well executed by Tyler Gastelum (Pooh-Bah), Jacob Walters (Pish-Tush), and Tyler Wright (Ko-Ko) due to their great chemistry as this trio of buffoons. I also noticed many people in the audience were clearly hearing these jokes for the first time, and their genuinely delighted reactions were wonderful for me to experience as someone who knows the text well.

In this production, everybody is given something to do, so even minor characters and ensemble members get a chance to shine. The entire cast had great energy and played off of one another really well. I especially want to commend the younger members of the cast for their great jobs, and I look forward to seeing them in future shows. Still, I want to highlight a few standouts. Aliyah Douglas is very funny and very darling as Yum-Yum. Erin Anderson as Pitti-Sing wows with her gospel stylings in the Act 1 finale. Jacqueline Stewart as Katisha brings big vamp energy to her two solo ballads (thankfully not played for laughs). Jacob Walters is delightfully campy and frenetic as Pish-Tush. While his performance came uncomfortably close at times to a Cab Calloway impersonation, Matthew Holter is suave and captivating as the tap-dancing Mikado. Finally, Tyler Wright as Ko-Ko very nearly stole the show with his spot-on, hilarious performance. ■