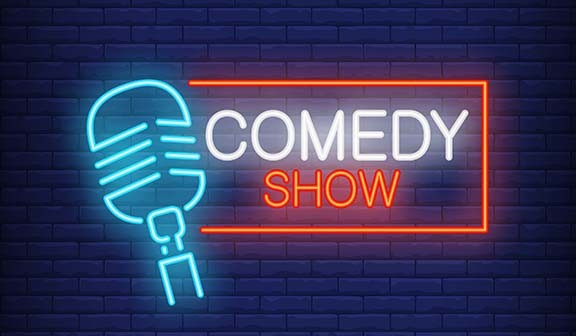 Bigstock
In the early and mid 20th century, there was this big theatrical movement called "Epic Theatre," which, sadly, did not just involve making more elaborately epic sets, costumes and plots. Instead, it was an idea about the purpose of theater itself.

The gist of it was that art forms like theater shouldn't be primarily considered forms of entertainment, but as ways of reflecting and critiquing reality. That is, a night out at the theater shouldn't be about escaping real life, but about staring it in the face. Pretty intense, if you're the kind of person, as most of us are, who likes to have fun on Saturday nights.

The second annual Tucson Comedy Crawl, which runs from Saturday, Jan. 25 to Saturday, Feb. 1, offers a little bit of both—that is, the whole "staring reality in the face" thing and the "delightfully entertaining" thing.

Comedy, of course, is all about making people laugh – but to make people laugh, you've usually got to say something about something, whether it's politics or the weather or a trip to the grocery store. So, comedy has this unique ability to intersect with almost any area of our lives—and to find the humor in different realities. Fittingly, the vibe of the crawl is something like "comedy &." Comedy & learning, comedy & feminism, comedy & local brews. You name it. Comedy is everywhere. And this week, it's especially everywhere. 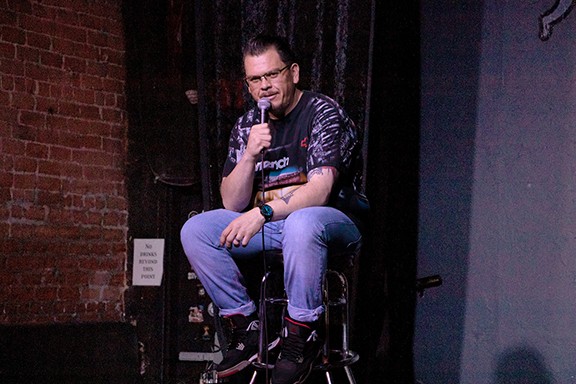 Hotel Mccoy, the artsy abode that opened in 2018, has been holding a "Last Friday, Last Laugh" comedy showcase since early 2019.

Nicole Dahl, Hotel McCoy general manager and creative director, says providing a venue to showcase local performers fits right in with the hotel's mission of promoting local art. Back in October, for example, they launched Arizona Art Fest, an event where rooms of the hotel were transformed into art galleries, performance spaces and even a comedy club.

"It was really about acknowledging that art is not just a painting on a wall, or a mural, but art is poetry, art is jewelry, art is comedy, art is fashion. Art can be tangible, or art can be an experience," Dahl says. "It truly is an art to write a well-educated joke and make people laugh. That is a craft right there. So I consider comedy an art."

The lineup of the show is different each month, and Dahl says that allowing the comedians creative freedom is an important part of what she thinks makes it great. Not to mention, she adds, that every time they have a showcase, she ends up with sore abs afterward from laughing so hard. One of Dahl's favorite moments came when comedian Cami Anderson told a joke about wetting the bed, which had the audience in hysterics. At the end of the joke, she lifted up her dress to show she was wearing a pair of Depends.

"It was the funniest thing I've ever seen," Dahl says. "To me, it felt like it was a joke I'd hear on a Netflix special, and here I am seeing it in a live show of Tucson artists... If you're skeptical of local comedy, come on down and give it a chance."

Hotel McCoy's lineup for the comedy crawl is notable for being the only 100 percent clean lineup in the crawl. So bring your kids! Bring your grandma! Bring someone on a first date!

"We just try to be really inclusive at Hotel McCoy," Dahl says. "We love the idea of being extra inclusive and doing a clean comedy show."

Speaking of inclusive, the Liberal Agenda, hosted by local nonbinary comedian/writer/educator Em Bowen, is a show focused on "punch up" comedy.

When Bowen's friends at Crooked Tooth Brewery asked them to put together a show, Bowen decided to create a space dedicated to this special brand of comedy, where women, queer individuals and other marginalized groups would feel welcomed. They thought about what a critic might quip when looking at the types of people in the audience and embraced it by titling the show "The Liberal Agenda."

Bowen gives comedians a basic rundown of what is and isn't cool to joke about in a Liberal Agenda set. They also give a disclaimer to the audience at the beginning: That this is an honest effort, that people are probably going to mess up, but they're going to own it. It's a show about inclusion and expansion: Bowen invites comics who might not specialize in punch-up comedy to adjust their material and come try it out. For that matter, they're inviting people who have never done comedy before to take a shot.

Bowen found their way into comedy after earning an MFA in creative writing and trying their hand at storytelling shows. When they found people were laughing at parts of their stories that weren't funny, they wondered if they ought to try focusing on the funny parts. That was about two years ago. Since then, they've made their way in the local comedy scene, and helped other people, both performers and audience members, find their way as well.

"There are people who have come up and said, 'I love comedy. I hate going to comedy shows. This is the first show I've been able to enjoy,'" Bowen says. 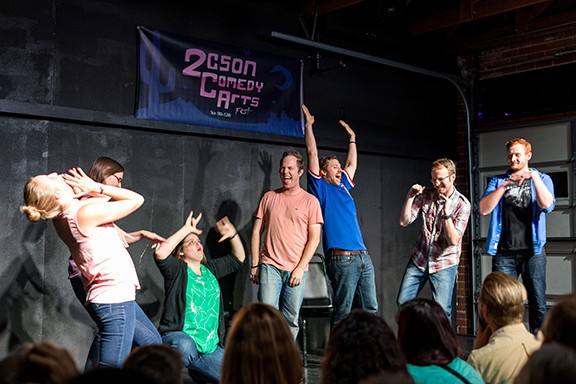 Roxy merrari grew up going to comedy shows with her father. He was the type of person that would laugh so hard in a movie theater that people would get up and move away from him. And Merrari loved it. So she grew up with this love of laughter, this physical desire to laugh, and spent a lot of time at comedy shows. In 2015, a friend invited her to try out doing a comedy at open mic.

"I tried it, and I was like, 'Oh, this is what I should have been doing all along,'" she says.

Merrari launched Comedy at the Wench, the longest-running independent weekly comedy show in town, with fellow comedian Mo Urban in May 2016, at a time when there weren't many open mic opportunities around. Urban and Ferrari sat down for breakfast with a plan to get something started, especially to give women a place where they could get more stage time. They knew they liked the Surly Wench Pub, and they knew they wanted to put together a new show.

"We didn't know what we were doing, but we did it," Merrari remembers. "Now, we kind of had a clue."

One thing that makes Comedy at the Wench unique is that it gives comedians a chance to practice longer sets, and that Merrari keeps an eye out on the talent for their potential roles in showcases. The show happens weekly. But for the Comedy Crawl, and in honor of the Tucson Gem & Mineral Show, they're putting on a special showcase called "The Precious Gems of Comedy," featuring some of the top performers from the Arizona comedy scene.

"I am really proud of this lineup, and these people make me laugh hard every time," Merrari says. "[Comedy] is just a very healing thing, and you never know—you might want to try it."

Josiah Oseago and Alex Kack (better known these days as "Green Shirt Guy") have been doing a show called "What Really Happened?" at Sky Bar for a few months now, where comedians stand up and tell three stories—two true ones from their lives, and a third one that's totally made up. After each comic, the audience votes, by table, on which story they thought was the lie. The table with the most right answers at the end wins a prize. It's basically the game "two truths in a lie" sometimes used as an icebreaker at events, but with longer, funnier stories. Osego said he came up with the idea to give comics a chance to do more storytelling, or for storytellers to try their hands at comedy. It's been fascinating, he says, to watch what truths people decide to tell.

"Some comics decide to get very vulnerable, and decide to tell the craziest parts of their lives," Osego says, reminiscing on stories comedians have told about train jumping, doing drugs and, once, working as a stripper after finishing rehab. "When a comic makes themselves vulnerable, even if it's not funny, usually the audience is going to go home feeling better that they're not the comic that was up there."

It's also a powerful reminder to not judge a book by its cover—Osego tells stories about comedians who look almost comically wholesome taking the stage and talking about their relationships with married women, or sharing dark stories from their past that have him learning new things about his fellow comedians.

"The audience is terrible [at guessing the lie]," Osego says. "And I give credit to the comedians for that."

Family-friendly short-form improv with Not Burnt Out Just Unscrewed and Ken Carr of What's Up Tucson, Unscrewed Theater, 7:30 p.m. $5-$8.