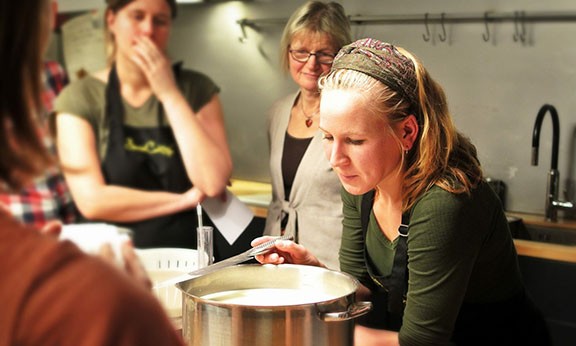 courtesy Flying Aprons
Get cooking!
Want to learn how to cook like your favorite chef from our UNESCO designated City of Gastronomy, but only have about two hours? Don't despair. Two local women with an appetite for local food and culinary instruction have got your back.

Flying Aprons Tucson, a unique cooking school taught by Tucson chefs, is providing one-off classes in subjects such as "Flavors of the Southwest" taught by Chef Carlotta Flores from El Charro Restaurants and "Breakfasts and Brunches" taught by Chef Kyle Nottingham of Prep and Pastry and August Rhodes of Commoner & Co., just to name a couple.

"With such a vibrant foodie and restaurant scene and so much creativity going on in our community, we think it's just a great opportunity for people to have some fun in the kitchen," said Michele Schulze, co-owner of Flying Aprons Tucson. "That's how the kitchen should be. Food doesn't have to come out of a frozen box."

The idea came from business partners Michele Schulze and Miriam Nickerson after many culinary outings in the Old Pueblo. Schulze says she's inquisitive by nature due to being a former journalist. When dining out, she said she often wondered about how the dishes she ordered were prepared and what was the inspiration behind them.

"I wanted to engage local chefs because I've always wondered, 'Who is the person behind this food, this menu, and how do they come up with all of that,'" Schulze said. "Flying Aprons Tucson came from that."

Classes will take place at Cook Tucson, a commercially licensed community kitchen and commissary located on Stone Avenue. Most classes are about two-and-a-half-hours long and will set you back about $69 per class (far cheaper than culinary school). All classes include a cooking demonstration taught by a local chef and will give the student hands-on experience. Flying Aprons will be supplying all the materials needed to participate.

The school is also planning on hosting couples cooking classes, corporate team-building parties and private parties, as well as holding boot camps for people wanting to learn more that can't be done in two hours, such as breadmaking. The boot camp classes are expected to be held each month on consecutive Sundays throughout a month, giving people who work during the week an opportunity to participate, according to Schulze.

But the classes aren't just for adults, says Schulze. Each month they plan on having youth classes for kids and teenagers, age 7-17, called Family Funday Sundays. On Feb. 9, the school will be offering two youth classes for Valentine Cookie Decoration with Chef Annie Berube of CopCake Cakery. Schulze says they're planning to host kids cooking camps during the week of spring break in March and longer youth camps during the summer.

"The response from the Tucson culinary community has been so wonderful," Schulze said. "Every chef we have approached has been enthusiastic and they want to participate."

Chef Maria Mazon, owner of Boca Tacos and instructor for Flying Aprons, says she is excited to be teaching her upcoming class in March. The class will focus on preparing Sonoran food and is open for children and their parents.

"It's going to be a great class where I teach them not only how to cook, but how to eat properly," said Mazon. "Cooking with kids comes natural. I speak 11-year-old."

Mazon, who grew up in Sonora, Mexico, said she is most excited about teaching children and their parents what real Sonoran Mexican food is all about...not a bunch of cheese and sour cream. She is self-taught and says she has the scars and burns to prove it.

"If I can teach a young person how to cook or peel an onion or whatever, then I'm happy," Mazon said. "Being a part of something so beautiful and teaching people how to (cook) how I would is amazing."

For more information and/or schedule of classes, check out their website at flyingapronstucson.com.