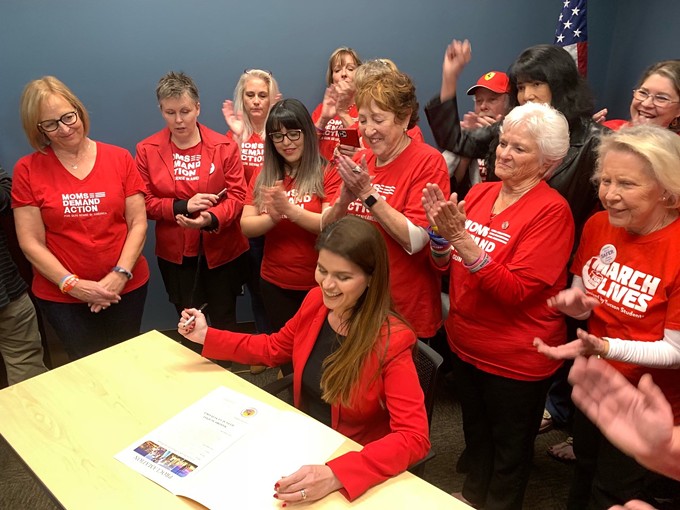 Austin Counts
Tucson Mayor Regina Romero: “We do not need to wait for the federal government to act locally."

Mayor Regina Romero today signed on with Mayors Against Illegal Guns and announced the creation of the Mayor’s Task Force on Gun Safety and Violence Prevention at a City Hall press conference.

“It is important that we stand in solidarity with mayors across the country to show that in absence of state and federal action, our national cities will act,” Mayor Romero said. “We do not need to wait for the federal government to act locally.”

“Mayor Romero understands the importance of taking real action to reduce gun violence in our community,” said Rene Friedkin, a volunteer with the Arizona chapter of Moms Demand Action. “We are thrilled to have her join this bipartisan coalition who are working on the frontlines of gun safety.”

Romero also announced the creation of the Mayor’s Task Force on Gun Safety and Violence Prevention, which will be composed of gun-violence survivors, students, neighborhood leaders, mental health professionals, public safety officers and others.

“I will be tasking them with helping me identify what actions we need to take at a local level to promote community safety and reduce gun violence in our city,” Romero said. “No matter our background, we deserve to live free of fear.”

The task force is designed to promote public awareness and education for gun safety as well as collect local gun violence data to analyze and diagnose troubled areas, according to Romero. The task force also plans on supporting and funding behavioral-health awareness training for first responders.

Romero praised Tucson Police Chief Chris Magnus, who was the press conference, for his effort in expanding training so that officers know how to respond when they encounter someone who is mentally ill.

“Every single police officer must get trained on this issue," Romero said.

“There are a lot of things we can do locally to address this challenge, but it has to start with an understanding of what’s going on,” Magnus said. “We need good data to work with.”

The biggest obstacles TPD officers face in the line of duty are the number of guns used in violent crimes, people not storing guns properly and the fact that prohibited possessors can still get their hands on firearms, according to Magnus. Trying to solve crimes that involve guns is expensive and quite a bit of work, Magnus said.

“Having a gun unit ready that has the kind of resources it needs is a challenge,” Magnus said. “That’s something we are going to be looking at as we go into the upcoming budget year, because being able to prevent and solve as many of these crimes is absolutely our top priority.”
© 2022 Tucson Weekly