Economists deliver strong forecast for Arizona and Tucson in 2020 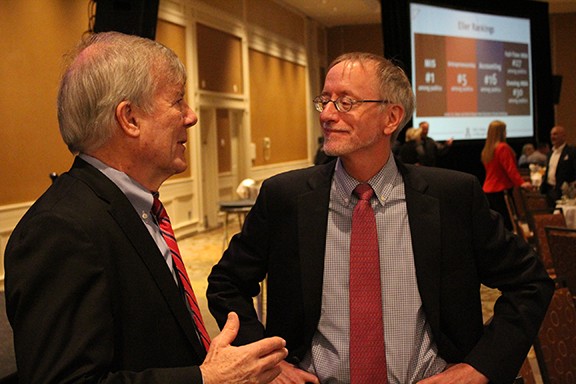 Courtesy Photo
John Glassman, left, speaks to George Hammond, after they gave separate presentations about the state of the economy.
Tucson's economic forecast looks strong moving into 2020, and as far as economists are concerned, another recession is not likely in the years to come.

In Arizona, job growth is particularly on the rise in the manufacturing sector, as well as construction and healthcare.

Overall, job growth for Tucson is on the upswing.

"In fact, for the last three months we've been beating the national average in terms of job growth, at least in terms of the preliminary data, and our job growth last month is close to what Phoenix is generating," Hammond said.

Transportation, utilities and the trade/retail sector did experience job losses and Hammond said a battle between brick and mortar locations and web-based retail is a factor.

Income growth is moving upwards alongside the growing number of jobs and the state's minimum wage increase. As a result, consumption in the form of retail sales and sales tax to the state's municipalities are also growing.

While Hammond said Arizona is a state that experiences fast population growth, the demographics are shifting some.

"Net migration drives population growth, and has historically, but migrants here are really diversifying," he said. "It's a lot of retirees still but most people coming to the state were now moving for work."

Though work is driving more net migration to Arizona, the number of young people in Arizona is threatened by a statewide "baby bust," where there is a decrease in birthrates and an increase in deaths, because society is growing older and less people are having children.

The number of working age people with a Bachelor's degree or higher is lower than the national average in Tucson and Phoenix, as well as the overall state.

"States and metro areas that have higher concentrations of highly educated individuals with a bachelor's degree or better did better in terms of generating growth in jobs, population, income and per capita income," Hammond said. "Education attainment is not the only thing that matters but it is one thing that matters a lot and one of the reasons is that the machines are coming."

The impacts of automation and AI technology upon the market is a newer area of interest for economists.

Jim Glassman, Managing Director and Head Economist of JP Morgan Chase, said automatization is doing more and more of the jobs that humans used to do. He traces a shift in how income is divided between workers and profit to the advent of technology.

"In the late 1990s, labor productivity kept going up and hourly compensation did not," Glassman said. "A lot of innovation is taking jobs away and the economic value of what humans used to do is now being done by automatization; benefits are flowing to profits not workers.

"It's not a question of jobs...if you lost your job to a robot in the auto plant it's really hard to find another job given the skills you have that will pay you what you were making at the auto plant."

Glassman's presentation offered a wider-scale look at economics, especially a sense of concern over another impending recession.

He said fears of an economic downturn don't surprise him, but are mostly unfounded.

"If I heard people talking about a recession I would think 'what are you talking about?'" he said. "The U.S. economy is basically back to full employment, all those pockets of unemployment are gone, the inflation dynamic is so well behaved and we see a financial system as well balanced as this is...I would wonder why people are talking about this, about recession."

While Glassman knows people are concerned with inverted yield curves, tariff treats, trade wars, Brexit and China, he sees the economy moving in a natural progression.

"As its settles and matures, we can expect to see the economy slowing down," he said. "It doesn't mean it's the first step to recession, it's just settling into a more sustained rhythm."

"If we do fall into recession it will most likely be a far less severe downturn than we experienced in 2007 to 2009," he said. "That's because we aren't seeing the same kind of imbalances now that we were then."

To learn more about Arizona and Tucson's economic forecast, visit the Eller Economic and Business Research Center at eller.arizona.edu/departments-research/centers-labs/economic-business-research.