Flandrau Holiday Shows. We’ll be honest: A visit to the planetarium pretty much always feels like a holiday spectacular. What’s more festive and twinkly than the night sky? But this time of year, Flandrau has got three holiday-themed shows that are fun for the whole family. Season of Light, set to popular holiday music, celebrates the many holidays that take place around the winter solstice. Laser Holidays is a laser light show set to classic bops like “The Christmas Song” and “All I Want for Christmas is You.” And Holiday Magic is another laser show set to classic Christmas songs. Holiday shows this week take place at various times on Friday, Dec. 20, through Monday, Dec. 23, this week. Flandrau Science Center & Planetarium, 1601 E. University Blvd. $16 GA, $12 for kids4 to 17, senior/military/college students with ID. Free for kids 3 and under.

It’s a Wonderful Life. Yeah, it’s the week of Christmas, get ready for a whole lot of jolly screenings. The Fox Theatre is screening the tear-jerkiest of Christmas films twice this week, just in case you want to reignite your passion for life multiple times. There’s really nothing more to be said about how important this film is in the Christmas canon, so instead, here’s some trivia: the film was a flop upon initial release, but went on to be ranked as the “#1 Most Inspirational Movie of All Time” by the American Film Institute. Also, a photo of a six-month-old James Stewart is featured on the Bailey’s home. 2 to 5 p.m. Monday, Dec. 23. 17 W. Congress St. $7.

The Ice Pirates. The year is 1984, the original Star Wars trilogy just concluded and changed how Hollywood treats sci-fi, but not everyone wanted to take it seriously. For their Mondo Mondays series, The Loft Cinema is bowing down to John Carradine, the man who starred in more than 300 films, including this B-movie mess. The Ice Pirates depicts a galaxy running low on water, and a rag-tag team of swashbucklers dedicated to causing a ruckus with every cheesy alien they can find. There’s even a creature called a “Space Herpe.” Fun! 8 p.m. Monday, Dec. 23. 3233 E. Speedway Blvd. $4. 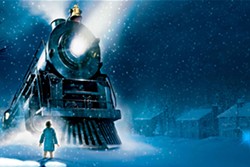 The Polar Express. How did this whimsical children’s film become a holiday classic? Because it’s written by Chris Van Allsburg, the most important children’s author since Dr. Seuss. Allsburg, also responsible for Jumanji, Zathura and The Mysteries of Harris Burdick, knows how to capture mystery and adventure like a child’s mind. And wouldn’t you know it, this film adaptation does a pretty faithful job of translating the book. The Fox Theatre is screening possibly the least unnerving live-action motion capture film (certainly compared to future endeavors like 2009’s A Christmas Carol and 2011’s Mars Needs Moms). At 10 a.m. and 6 p.m. Monday, Dec. 23. 17 W. Congress St. $7.

This Latin lounge troubadour was found “on a remote island as an infant. Rescued from jungle cats, he was raised listening to his beatnik father’s record collection.” Or so the story goes. Hans Hutchison performs at Club Congress. Mamma Coal opens…