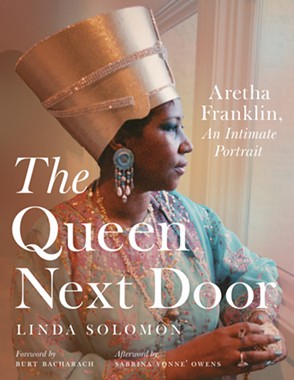 The Tucson Museum of Art is celebrating the local launch of The Queen Next Door: An Intimate Portrait of Aretha Franklin by photojournalist Linda Solomon. The event features Solomon in person, plus a pop-up photo installation, book signing and conversation with the author.


Solomon wrote and photographed for The Queen Next Door over the course of four decades. The book features more than 200 exclusive photographs, plus a foreword by composer Burt Bacharach and an afterword by Aretha’s niece.


“I met Aretha in 1983. At this time I was a columnist with the Detroit News. I arranged with a producer of a local talk show in Detroit to come down and take one photograph of Aretha,” Solomon says. “I did a column about this first meeting and shortly after I received a message from Aretha inviting me to a private reception with her family at the Mayor’s residence in Detroit . She continued to invite me to private rehearsals with The Rolling Stones, James Brown and others.”


Solomon, a member of the Michigan Journalism Hall of Fame, has written and photographed for multiple books. She also founded the Pictures of Hope program, which supports homeless children, including those in Tucson, through the power of photography.


“My book shows Aretha’s realness and the photographs shows how she gave her heart and her soul to everything she did,” Solomon says. “The photographs are intimate, fun and express the heart of an international treasure.”


A Night With Aretha at the Tucson Museum of Art. Tuesday, Dec. 3. 6 to 8 p.m. 140 North Main Avenue. Free. For more information, visit tucsonmuseumofart.org/event/a-night-with-aretha