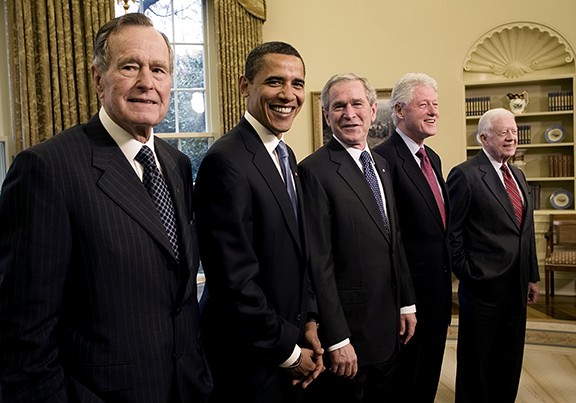 In his exhibition Witness to History at Old Main on the UA campus, Kennerly evokes a 32-year-span of presidential history in a single shot: his famed portrait of five smiling U.S. presidents all in a row.

Elsewhere we find the first two women justices on the Supreme Court, Sandra Day O'Connor and Ruth Bader Ginsburg, sitting in the U.S. Capitol in 2001, surrounded by marbled statuary of dead white males.

Hillary Clinton turns up as a young working attorney in a hearing on impeachment charges leveled against President Nixon in the Watergate scandal. And Nixon himself poses in a grand White House hallway in 1974, the year he resigned in disgrace. Kennerly has photographed him from a distance, and the soon-to-be-ex-president is dwarfed by the building's grandeur – and its history.

One of the most heartbreaking pictures catches a jubilant Sen. Bobby Kennedy reveling in his victory in the 1968 California presidential primary, his smiling wife standing at his side. But the moments of joy that Kennerly recorded were the last of the candidate's life. The picture was snapped an instant before Kennedy was shot to death.

Kennerly's career has been extraordinary. His first published photo, a shot of a baseball game, ran in his high-school newspaper in Oregon, but after that humble beginning it was a quick jump to local newspapers and then on to the national press.

By the time he was 23, he was photographing Nixon for the UPI, flying around in the press pool on Air Force One. Eager to cover the biggest story of his generation, Kennerly at 24 took off to Vietnam to shoot combat photos. Within a year, at age 25, he won the Pulitzer for feature photography, in part for his searing battle images.

He's worked around the world, in 130 countries – this exhibition includes portraits of Fidel Castro, Anwar Sadat and Mikhail Gorbachev and he's photographed for bigtime media outlets from Life to Time, and from Newsweek to CNN, scoring dozens of cover spots. (His first Time cover was a portrait of his friend Ansel Adams.)

The small show at the UA, just 25 photos, finds room for portraits of Arizonans. Tucson's own Linda Ronstadt is pictured in 1977, her brown eyes glowing. John McCain gives a speech admitting defeat in the presidential primaries of 2000, a spectacular view of the western mountains and big skies behind him. Sandra Day O'Connor, product of an Arizona ranch childhood, is honored in two pictures.

The Arizona pics are fitting: the exhibition is a thank you to Kennerly for placing his vast archive permanently in the state, at the UA's Center for Creative Photography. Students, professors and the general public will have access to his thousands of photos documenting signature world events.

"It's the right place for the archive to be," Kennerly says by phone from his home in California. "This is an institution that will care for it. The work encompasses history, art, journalism and the history of photography. That's why it's at a university – it needs to be seen and studied."

Though he's mostly linked to political news, Kennerly is also admired for his sports acumen. One famous image memorializes the Fight of the Century, the 1971 Muhammad Ali-Joe Frazier heavyweight champion match. Kennerly caught an eyepopping moment: Ali is falling backward after a blow from Frazier, his body still in mid-air, on its way to defeat.

But Kennerly is also gifted at photographing the unknown and the suffering. A gruesome view in the show of a starving Pakistani refugee, bearing all his worldly goods atop his head, was in the packet of 1971 photos that won Kennerly his Pulitzer. (So was the image of Ali.)

In Vietnam he photographed the wounded and the weary, the people whose lives were disrupted – or ended – by the leaders he so often portrayed.

A black American soldier wrapped in a plastic poncho sits in misery in a monsoon rain in one of these photos. A baby-faced young trooper stoically sloshes across a stream on foot, bullets wrapped around his waist and heavy weapons slung on his back.

Two Vietnamese soldiers struggle to drag a seriously injured buddy from a thicket. One of the would-be rescuers, a thin young man whose helmet is way too small for his head, grimaces in pain.

That image of Vietnamese suffering is a reminder of why the Vietnamese call the conflict the American War: some 1.2 million Vietnamese soldiers from both north and south died, and a whopping 2 million civilians lost their lives. So did 58,220 American soldiers.

Kennerly came close to joining the 63 journalists who perished while informing the world of the war's horrors.

The day after he won his Pulitzer Prize, Kennerly went back to work. He traveled in-country with a UPI colleague and a driver. Twenty-five miles north of Saigon they suddenly found themselves in the middle of a deadly firefight.

Vietcong soldiers were on one side of the road, and South Vietnamese—and a couple of American military advisors—were on the other. Bullets were flying.

"We came under fire from the North Vietnamese," says Kennerly "It was raining. We couldn't get air support. Twelve soldiers were gunned down."

But Kennerly didn't run for cover.

"I was trying to take pictures," he says. "Doing what I do."

During those terrifying moments when the bullets whizzed past him, he imagined his friends and family getting the news of his death.

But he didn't die that day. The driver managed to get the two photographers out. Ever since, Kennerly says, he's been grateful.

"I escaped death, I was alive, I got the Pulitzer Prize," he says.

And ever since, every day of his long career "is a gift."