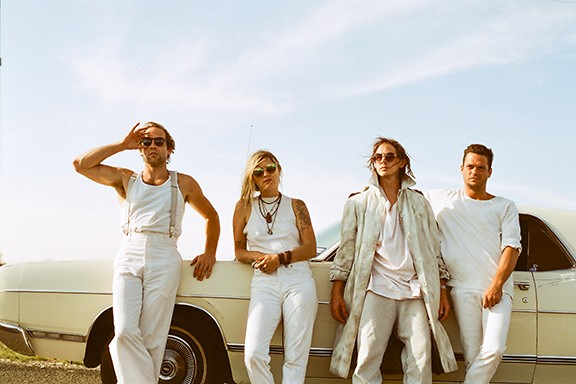 Courtesy photo
Catch Broncho, and plenty others, this year at DUSK.
This year sees the fourth Dusk Fest taking place at Armory Park, and the lineup is typically eclectic and outstanding, highlighting some of the best talent in contemporary hip-hop, pop and alternative rock. Dusk Fest might not have the scale and stature of a Coachella (very few festivals do), but this is a super cool event that has become a real jewel in the Tucson music calendar's crown since it first appeared in 2016.

Broncho released Bad Behavior last year, their fourth album in total, and frontman Ruan Lindsey says that he's been pleased with the response.

"Yeah, everything that's been said to our faces has been good," Lindsey says. "Our backs haven't told us what's been said behind us, but to our fronts it's been all positive."

Fans and critics have described the new material as more poppy than previous efforts, and that's a notion that Lindsey doesn't disagree with.

"I can get along with that," he says. "I like all types of music and being associated with pop is cool with me."

The singer and guitarist says that he's very much looking forward to coming back to Arizona for Dusk Fest.

"Yeah, I love Arizona," Lindsey says. "I love the desert. I also love dusk, so this festival seems perfect for us."

Lindsey says that we can expect a "lot of sweat" from the Broncho set at Dusk Fest and, when that's done, the band will be continuing to the West Coast, and up to Canada before finishing the tour in Denver.

"Then we go home and start a new record," he says.

Paris-based house producer Dombresky, real name Quentin Dombres, already put in a killer performance at Hard Summer this year—Dusk Fest is likely to be the cherry on a very good year so far for the man. L.A. indie-poppers Fitz & the Tantrums have also come a long way since getting heralded on Kat Corbett's KROQ radio show Locals Only. Their fourth studio album, All the Feels, came out in September.

"With every record, we want to go somewhere different," said Michael "Fitz" Fitzpatrick on the Dusk website. "Sometimes that vision is clear. Sometimes it's a process of discovery. I would say the first half of the writing process was us trying to give ourselves the freedom to do weird things and experiment. At the same time it was like a monkey on our backs having this song that was so massive. Quietly, in the back of our minds, 'HandClap' was the bar we would measure everything against and at a certain point, that became kind of suffocating. There were a lot of ups and downs for me personally, as an artist who is just trying to create something."

L.A. electronic producer and songwriter loves his hometown, though he was born in Massachusetts. "I left where I grew up and came to California with all these romantic ideas of what L.A. would be like," he said to Dusk. "Over the years I've fallen completely in love with everything about it, even all the grit and grime, and with this album I wanted to pay homage to L.A. and how it still feels so romantic to me."

"Lune Rouge is the culmination of all the experiences I've encountered so far," Lee told Dusk. "During its creation, I faced some of the most difficult and uplifting moments of my life. Seeing myself at the edge of my own mortality and how I chose to move past is a story told in this album."

Australian producer and DJ What So Not is looking at his Dusk Fest appearance as part of this free and spontaneous year.

"I'm in a completely different frame of mind," he told Dusk. "This year is about spending time in different regions of the world where there's really exciting scenes happening and getting inspired."

And then there's Whethan, aka 19-year-old producer and DJ Ethan Snoreck, who has recently hit 275 million streams globally.

"It's a huge honor to be able to debut my label with a release from myself and Diddy," said Wax Motif in a press release accompanying the single. "Diddy is legendary to me—I probably watched the 'Bad Boys for Life' and 'Mo Money Mo Problems' videos a million times growing up. I feel the whole message behind the 'Divided Souls' lyrics resonates with me and the dance music scene. The line where Diddy mentions 'divided souls' really stuck out to me and I couldn't get the phrase out of my head, so I decided to call the track and the label by the same name. I'm excited to debut my label and to share a vision for myself and for new artists."

That desire to push boundaries and share a vision seems to be something that the Dusk Fest performers have in common, regardless of genre. It promises to be a phenomenal weekend.