At the Finish Line 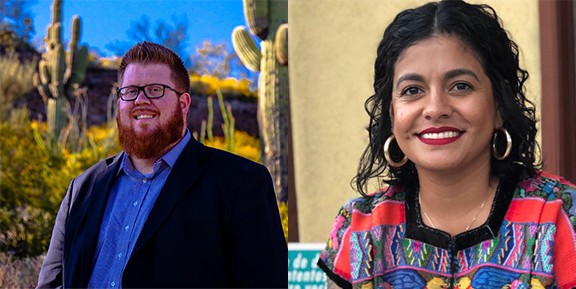 Like her fellow Democrats, Santa Cruz is benefiting from 2-1 voter-registration advantage that Democrats have in the City of Tucson.

And on the fundraising side, Santa Cruz has an even greater advantage. As of the end of October, Santa Cruz had raised nearly $130,000 (including nearly $60,000 in public matching funds), while her Republican opponent, Sam Nagy, had raised less than $2,000 for his campaign.

Green Party candidate Matthew Smith is also in the running, but hasn't filed any campaign finance paperwork as of our print deadline. Smith declined an interview with Tucson Weekly due to medical issues.

Santa Cruz, who triumphed in a four-way Democratic primary in August, has another advantage in this race, having worked in the Ward 1 office for councilmember Regina Romero, who gave up her seat this year to run for mayor. Santa Cruz also taught classes at the University of Arizona focused on Mexican American studies and education.

If elected, one of her biggest goals is to push the city to put more of an emphasis on bike paths and sidewalks when the city does road projects.

"Why do people continue to get killed on bikes or on foot?" Santa Cruz says. "When did we center cars as a way to move and connect people?"

She wants to take residents' experiences on the road to inform city staff on what needs to change, arguing they should gather more public input when developing their projects.

Tucsonans are increasingly concerned about the encroaching effects of gentrification, especially in Ward 1, where both historic barrios and new developments spreading out from the downtown area exist.

Santa Cruz supports multi-generational housing where families care for their older relatives in the same residence, and says the city can do a better job of working with neighborhoods to establish plans that "guide affordable housing, small business and livable community development."

She also supports requiring developers to include a percentage of affordable housing in their projects.

"We always think low-income housing, we need that, but we need housing for people with two working-class jobs," Santa Cruz said.

She believes that because goods and services are expensive in the downtown area, working-class people become alienated and are pushed outward to where they can afford to live.

Her website says she's supportive of small businesses and cooperatives, which create "cultural sustainability." A former employee of the bicycling-centric BICAS co-op, Santa Cruz says cooperative working environments are a great way to ensure that local people are being paid a fair wage.

"If we want to talk about economic justice and having better paying jobs, we need to see that there's people doing that all over the country and for Tucson being as progressive as it says it is, we are missing out," she said.

Santa Cruz would like to see Tucson's public schools double as community centers, where GED and ESL classes are provided and vocational trade programs are offered by labor unions. She says our parks and recreational amenities can be used for out-of-school programs for kids, such as bike clubs, outdoor camps and city ambassador employment.

"I was told that if I wanted to be successful, I needed to leave Tucson, and I refuse to believe that," she said. "We're not building the skills and training from our own to go into those jobs, that's part of the disconnect."

Santa Cruz is one of the few candidates running for office this year who supports Prop. 205, the sanctuary city initiative that would limit the ability of federal law enforcement officials to work with local police, but adds that the city should be doing other things outside of the police department to benefit the immigrant community, such as providing municipal IDs and making sure the transportation system is efficient for those who can't obtain drivers licenses.

"Whether or not it passes, my work will always be centered around protecting our most vulnerable populations," Santa Cruz said. "If we center them, it's going to make it better for everybody else."

Earlier this year, nagy was the sole Republican candidate for mayor but dropped out after he didn't receive enough signatures to get on the ballot. He then became a write-in candidate for Ward 1. More than 200 Republicans living in the district wrote Nagy's name on their primary ballot. He needed at least 84 write-in votes to move on to the general election.

The biggest thing Nagy wants to improve on is transparency within city government. He says on specific issues like staffing for the fire and police departments, city officials should be more forthcoming with information.

"A lot of city government is behind closed doors and from what I've seen, there's definitely room for a little more openness with the people," Nagy said. "There's never a bad time for a board or a coalition or a community advisory council giving that transparency into the city government."

He wants to see those staffing numbers increase, and like fellow Republican city council candidate Michael Hicks, Nagy believes the city can get it done by cutting costs within the current budget.

He uses his unconventional past as a strength to his candidacy. Nagy is a former addict who faced numerous drug-related arrests and spent time in jail during his youth. Now more than a decade into sobriety, Nagy works as a peer support specialist with the behavioral health nonprofit Community Partners, Inc. If elected, he would work to help homeless and near-homeless Tucsonans access the network of free resources provided through the city and various community organizations.

Even during his earlier struggles, Nagy always envisioned himself as a city leader. While he wants to use his platform to focus on the "core aspects" of city government (improving parks, pavement and police) Nagy also has an interest in improving city-run after-school programs and attracting more out-of-state businesses to Tucson.

"This is the funnest thing I've done in a long time," Nagy said of his first political campaign. "I'm looking for some change. We are a diverse people and I'm looking forward to representing them."