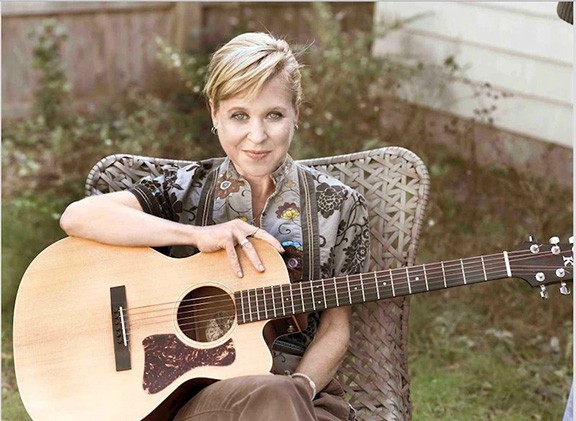 Courtesy photo
From her rebellious early days as the vocalist/guitarist in Throwing Muses, to a sprawling solo career of introspective ballads, to publishing multiple books, Kristin Hersh has always maintained a unique voice. Whether anxious or serene, her art almost seems out of a dream, often raw, personal and impressionistic, with a bit of pain as well. Her newest album, last year's Possible Dust Clouds, finds her as raucous as ever, and working with the concept of "dark sunshine." While her voice maintains its power on this album, the guitarwork especially shines, using timbres found in noise rock and shoegaze. Even on a tenth solo album, Hersh shows no signs of abatement. Ahead of her show 191 Toole, Hersh told us about a few of her favorite songs.

On his new record, Pulsing. The gentle genius of a voice untethered, untampered with, unaffected and true. Fred's songwriting straddles both ends of inventive: challenging yet resonant, smart yet unpretentious, solid yet nuanced. A rare strength.

A study in atmosphere and restraint, on repeat, it carried my four sons and I through a hurricane. As we watched boats float past the house, the guitar's erratic melody and time signature matched the erratic wind scream. We all miss that hurricane now, but it may be this song as a soundtrack that we miss.

On the only CD in my car in New Orleans, so it played on repeat by default and somehow I never got tired of it. Maybe because it's a manifested soul's lament. If he'd found a home on this plane, he might still be here.

I like the term "irresistible" as a pop descriptive, if nothing else than to quash the idea that in order to be likable, music has to be stupid. This melody is irresistible, the production invisible and the song super cool.

A perfect, lovely moment. Mostly unheard, like everything this special. The Moore Brothers are goodness incarnate: no ego can touch their output. An unimaginably rare quality in the music business, which is why they're working outside of it.