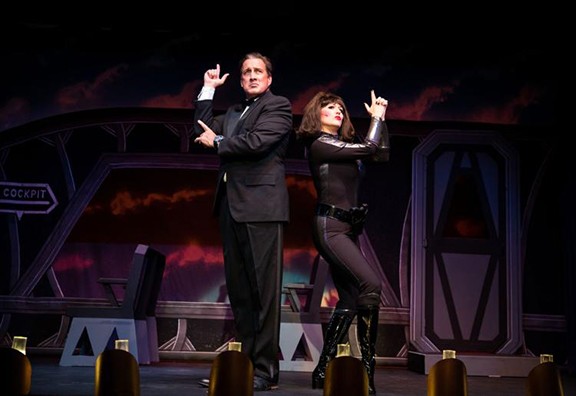 Courtesy photo
Brian Gawne David Fanning as Agent Strong and Heather Stricker as Agent Singleton.
With sculpted eyebrows, a well-fitted suit and a Mid-Atlantic accent perfect for radio, The Gaslight Theatre's David Fanning leads the way with a suave touch (and plenty of humor) in the company's newest production, "009 Licence to Thrill."

A rather exciting affair replete with gun fights, go-go dancers and shark tanks, "Licence to Thrill" is a spy escapade through and through—a fact made quite obvious by the familiar thrumming of a certain British spy's theme song to kick off the show.

With that timeless intro steps in Agent Jake Strong, a member of the spy agency SAFE, gun in hand, ready to save the day.

Strong starts the show as any good spy should: beating up a pair of evil henchmen with a swift one-two combo. After all, he is a man who leads a life of danger, and it's going to take a lot more than some guys in black masks to stop him.

It's not long before a lot more than two goons join the fight, however, and Strong is quickly up to his lapels in evildoers.

What comes next involves an airplane, a helicopter, a Soviet general and an evil plot to rule the world. Just another day at the office for a member of the Secret Agent Federal Exchange.

Will Strong save the day? Probably, but watching the world's goofiest secret agent pull it off is well worth the price of admission.

Like all of The Gaslight's family-friendly melodramas, the exposition hits the stage fast in "Licence to Thrill," with a handful of characters, setting and narrative delivered in the first few minutes of the performance.

Leading the way this time around is Agent Strong, and Fanning shines in his rendition of the classic spy stereotype. From the way he holds his eyebrows in a constant state of intrigue to his over-the-top strut across the stage, Fanning mixes Sean Connery with Jim Carrey to create a secret agent better suited to the comedy circuit than international intrigue.

Despite his predilection for humor over espionage, Strong is the perfect character for this tale, because the Gaslight crew stirs in a pinch of spy thriller with a heaping bucket-full of hilarity to craft "Licence to Thrill."

Whether on the ski slopes or the secret lair, Fanning's Strong is joined by a cast of equally silly spies and villains played by the regular faces of the Gaslight stage.

No secret agent works alone on this stage, and Strong is joined by Agent Singleton, played by Heather Stricker, whose comedic timing is only outdone by her singing prowess. And filling out the cast of SAFE agents is Joe Cooper as Director Quill. A longtime favorite of many Gaslight guests both young and old for his stage presence and improv ability, Cooper doesn't disappoint with his ability to turn any scene into a hilarious episode of what I call "What will Joe Cooper Do Next?"

Where there are heroes, there must be villains, and this production has a fair share of scoundrels who'd like nothing more than to rule the world.

At the helm of the evil empire known as CRIME is the sinister Le Flange, played by David Orley. Dressed in a white vest, slacks and a fez, Le Flange is a dead ringer of Will Ferrell's Mustafa in the 1999 spy comedy "Austin Powers: The Spy Who Shagged Me," and hoards plenty of laughter throughout the show.

While Le Flange leads the international syndicate, the man with his hand on the wheel is Dr. Victor Vector, played by the effervescent Jake Chapman. Sporting bell bottoms, a bowl cut and a temperament perfect for an evil teenager, Chapman absolutely entertains as the barely-sane Vector.

A clear contender for second-funniest thespian on the stage is Todd Thompson, who plays Oddfellow, a dim-witted henchman with a lot more brawn than intellect. Donning a suit of fake muscles under his black turtle neck, Thompson lumbers across the stage sporting sunglasses as he plows through secret agents with abandon.

And if you're going for one trope, why not two? Filling the roles of evil female agents with Bruce Lee-like martial arts skills are Gaslight regulars Janée Page and Erin Thompson, each of whom karate chop their way into the spotlight as Venus and Honey Bea, respectively.

It's good versus evil in the silliest way with this cast, whose adventures take them to ski slopes, underwater lairs and everywhere in between. Along the way, spies and villains battle across beautifully hand painted sets and avoid a handful of well crafted props like a helicopter and a giant avalanche. The bar is set high at the theater, and the behind the scenes crew turned out in spades once again to construct an impressive show.

Not to be outdone, the Gaslight Costume Shoppe ensures the cast is nothing short of groovy in their romp through a timeline that's a mix of the '60s and '70s. The bell bottoms flare and the patterns are psychedelic—just the way Austin Powers would want it.

And while most of the entertainment takes place on the main stage, The Gaslight Band provide the perfect musical backdrop for the entire performance (and plenty of opportunities for the audience to sing along).

Those looking for song and dance after the main show, and maybe just a few more laughs, will find plenty to cheer for during the "Singing and Dancing with the Stars Olio." The musical olio features the cast and band performing hits from Cher, Barry Manilow, the movie "Grease" and plenty more.