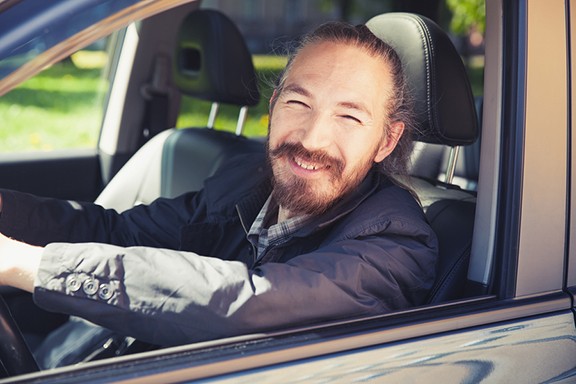 Some guys in an SUV got away with reeking of weed—and even having a small amount of it in the car—maybe because they didn't fail to amuse the cops who pulled them over (at least a little), according to an Oro Valley Police Department report.

While on patrol driving up Oracle Road, an officer spotted a white SUV with a problematically mounted temporary license plate (whose frame covered necessary information) and activated his emergency lights, causing the driver to pull over at a nearby intersection.

Approaching the car, the officer saw the man inside had pushed his head and torso out the window—the flailing of his arms no doubt only obviating the "strong odor of marijuana coming from the vehicle." With half his body still "hanging" out of his car, the subject demanded to know why he'd been pulled over.

Informed his license plate wasn't properly displayed, the man embarked upon a lengthy explanation—including its being a dealer plate and the car actually belonging to his grandmother in California. Not only did none of this help his case, but he concluded his speech by stating his license was suspended.

As if this were no biggie, he went on to say "he had an SR-22 somewhere," apparently referring to a document proving he was insured despite legal troubles—without explaining how he was insured but not licensed.

After some rifling around, he indeed located an insurance document and victoriously presented it to the officer. Unfortunately it was a medical-insurance card.

When a back-up officer arrived, both cops were able to turn their attention to the other man in the car, who also reeked of pot and had great difficulty speaking clearly—whether because he was very high or because he struggled with a speech impediment wasn't clear.

Officers immediately noticed this passenger had a "large bulge in his shorts": something in his pocket that he willingly pulled out to show them it was just a (very big) flashlight.

But the guy was still ... bulging. He had another "large bulge" in his pants—in fact a larger one. This bulge turned out to be three balled-up hand towels that had somehow been jammed in another pocket. The man also had a backpack that he claimed was his but was mostly full of women's clothing. He explained this by saying he'd "just grabbed random items" when he'd packed the bag, and the ladies' stuff wasn't his. (He didn't say whose it was.)

After a complete search of the vehicle, officers found a tiny amount of marijuana in a plastic baggie in the back seat, which both subjects adamantly denied was theirs. The officers decided not to charge either man with possession, and although the driver was given a civil citation for driving without a license, the actual vehicle's license turned out to be valid. Both men were released (presumably with the passenger driving).