Tucson is known for being an LGBTQ-friendly city. The Old Pueblo was even named the 11th most inclusive city in the United States by Yelp this June.

But even in a city like Tucson, hate crimes still occur and an LGBTQ person can be the target of aggression or an attack.

A local Krav Maga studio aims to protect people through a series of free, self-defense classes specifically catered to the LGBTQA community.

Jesse Tucker, owner of Rising Phoenix Fitness & Defense, has a passion for training Tucson in self-defense and saw the need to provide defensive skill classes for the LGBTQA community.

In 2017, he started Rainbow Connection, a series of free, weekly self-defense classes for those who identify as LGBTQ or an ally.

The right person to take over the class had been participating in Tucker's classes for about a year.

Tylar Elin Zinn said the idea was a perfect fit for them and they began running Rainbow Connection in June.

Zinn had quickly excelled in Krav Maga and passed their level one practitioner test in just a year. They see an ever-present need for these types of classes.

"We're known as a very queer-friendly town but you still hear stories all the time from people who have been targeted by hate crimes and general vulnerability overall — domestic violence, anything, can be compounded by those intersections in different communities," they said.

The class focuses on a different topic each week, like Restrooms and other Close Quarters Defense, Community Defense or Avoiding Abduction for Adults, Teens and Kids.

Zinn strives to provide practical applications people can use in real life situations and often turns to participants to come up with the weekly topics.

"I'm starting out from the perspective of what do I want to know," Zinn said. "I get a lot of feedback from the participants saying 'Can we do this,' 'What if this happens,' 'Can we try that next week,' and I really incorporate those suggestions and requests into classes." 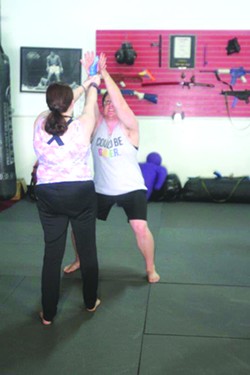 The class is rooted in Krav Maga, a close quarters fighting discipline used by the Israel Defense Forces.

"The goal is to take what works and what's easier and what goes off of people's natural responses, like your flinch response, and to turn that into action that will protect you," Zinn said. "We train for the basics, but we train as though the first thing you try and second and third thing doesn't work, so you're taking it through to the end."

The classes are set up for any skill level, age or fitness ability to participate and Zinn can offer alternative moves for people in wheelchairs, or who might have weak knees or backs. Classes start with introductions and pronouns, helping to create a safe atmosphere for a wide range of people.

"I want it to be a class where people can say what their pronouns are and I've actually had people who want to start using their pronouns here for the first time," they said. "Someone just messaged me and said they might be trying it out in class and I had another person who said they just started."

Participant Lucca Miller has attended three or four classes so far and said the safe, welcoming environment makes all the difference.

"Because it is a queer-centered and led program, there isn't that condescending or patronizing feel that I get from most gyms or otherwise cishet, male-dominated spaces," Miller said. "Tylar really believes in their students and being in this class has also helped me believe in myself more."

Miller had always been interested in self-defense classes but couldn't afford them and felt many programs used a guilt-based technique.

"I've struggled for a long time with the narrative of victim-blaming that surrounds the self-defense culture," they said. "There's an expectation that queer folks, or people socialized as girls or women in our society, are expected to know how to defend themselves, otherwise we are to blame for our assault when it does happen. I definitely don't feel that same pressure or negativity here."

Zinn and Tucker are both excited to see the classes grow, especially in the new space Rising Phoenix recently moved into.

"I think it's not as scary as it sounds and once you step in the door the first time, you've overcome the hardest part of it," Zinn said. "If you can get past that point and come to class the people are so nice and everyone is really kind and wants to help each other grow. That's what I want from this class, that it's about community-building, protecting yourself and also your community."

Rainbow Connection takes place every Saturday at noon at 4500 E. Speedway, Suite 4. The classes are free and open to all LGBTQA people, though donations can be made if a participant chooses.

For more information or to see a schedule of upcoming classes, visit tucsonselfdefenseandfitness.com.