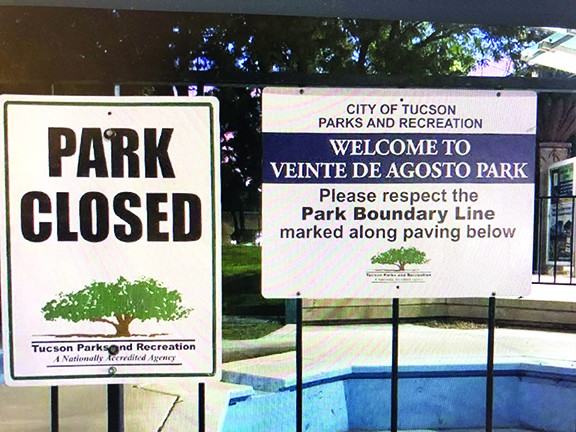 Margaret Regan
No place for a picnic.
A random visitor to Tucson would understandably be perplexed by the signs in Veinte de Agosto Park downtown.

"Welcome to Veinte de Agosto Park," reads the sign on the right.

But the sign on the left sternly cancels that greeting. "Park Closed," it says.

In fact, this tiny 1.2 acre park, scarily located in the middle of busy Broadway, where cars whiz close by in both directions, has been shut down since 2015—four long years ago.

An architect-turned-artist who specializes in "reimagining the environment we inhabit," he's put together a two-day event that mixes performances with workshops and talks. All the activities are aimed at having Tucsonans discuss what, exactly, we should do with a public park in lockdown.

The topic is serious but the event will be "engaging and playful," Hernandez says, and many of the performances will be participatory. People can make their own pocket parks out of wood pallets or sing along to scores that he writes. Sessions will include "We're PARK(ing) Here" at 1 p.m. and 7 p.m. Friday; "Sidewalk Sessions" at 10 a.m. and 7 p.m. Saturday; and "Sit On, Sit In, Sit..." at 1 p.m. Saturday. Participants can drop in and out as they please.

Hernandez promises that the whole enterprise is within the letter of the law. He has a permit from the city, and permission for activities to take place both on the sidewalk and in the parking spaces on Church Avenue, where the meters will be hooded.

Hernandez, a professor at the School of the Art Institute of Chicago, is well known for the art installation he made with collaborators Amanda Williams and Shani Crowe for the U.S. Pavilion at the competitive 2018 Venice Architecture Biennale.

He started making visits to Tucson last year, as a fellow in the UA School of Art's program Stop. Look. Listen: Art and Social Justice. Funded by the National Endowment for the Arts, the program brings in artists to do public projects around displaced and marginalized people.

When Hernandez heard about the history of the park, he knew he had found his project.

"I happened on the story of Veinte de Agosto Park," Hernandez says by phone from Chicago. "It's fascinating. It speaks to the issue of access.

"There was a forced eviction of an encampment."

Homeless people began occupying the park in October 2013 and more or less stayed until June 2015, when police forced them out. In between, a battle raged.

The homeless people asserted their right to live in the public space in a city with too few shelters; they moved in and renamed the place Safe Park. Opponents, including business interests downtown, objected to the eyesore and the stench of human waste—inevitable in a park with no bathrooms and a city with few public toilets. Finally, after a young man died in the park of a drug overdose, the city moved in and dismantled the camp.

It was a wrenching chapter in Tucson's history but, as Hernandez notes, Veinte de Agosto has a difficult "backstory" that goes back even further in time.

Its name stretches back to the era of Spanish colonialism. In 1775, on August 20 (Veinte de Agosto), Irishman Hugo O'conor, an officer in the Spanish army, chose what's now downtown Tucson as the site for a new a Spanish presidio, on what had long been Tohono O'odham land. To this day, the date is celebrated as the birthday of Tucson, though the terrain had been occupied by native peoples for thousands of years.

And in modern times, the land the park now sits on was the heart of Barrio Viejo, a heavily Mexican-American neighborhood that was nearly obliterated by urban renewal in the 1960s. Some 260 buildings were torn down, and more than a thousand people displaced.

"A whole community was razed," says Hernandez, who toured the are—now transformed—with professor Lydia Otero, whose book La Calle chronicles the politics of the destruction.

The remnants of La Placita, an important gathering place in the old barrio, survive as a small plaza, graced by La Placita's original gazebo. The park, across the street on a pitifully small piece of the old Placita, was meant as a small consolation for the tragic loss.