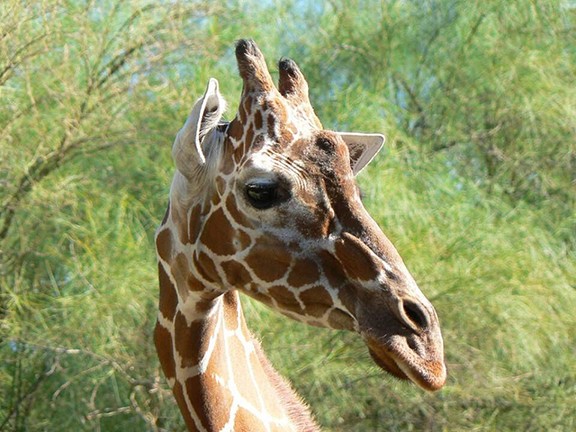 Courtesy photo
The Reid Park Zoo said goodbye to one of its animal inhabitants this week, 20-year-old Elinor the reticulated giraffe. Born in the Knoxville Zoological Gardens on May 29, 1999, Elinor came to Tucson when she was 11 years old in 2010.

According to the zoo, Elinor died Monday, Sept. 2, just a day after “demonstrating signs of respiratory distress.” The zoo’s medical team responded to the situation, but were unable to keep Elinor alive.

She did have a history of breathing problems, and a necropsy performed at the University of Arizona Veterinary Diagnostic Laboratory will reveal more information in the coming weeks.

The median life expectancy of giraffes like Elinor is 19 years. Elinor lived at Reid Park Zoo with two other giraffes: Jasiri, an 8-year-old male, and Denver, a 30-year-old female who is the second oldest giraffe in the United States. Giraffes are listed as a vulnerable species and less than 70,000 animals remain in the wild.