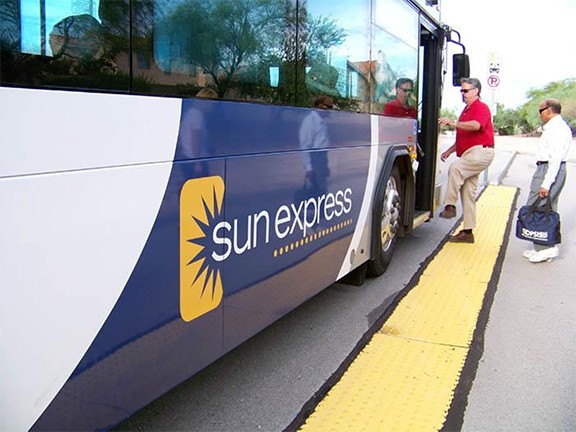 The City of Tucson hopes to field its first electric bus early next year.
For years, residents of the greater Tucson area have called on their elected officials to transition Sun Tran's buses to an all-electric, clean energy fleet. Thanks to a $2.6 million grant from the Federal Transit Administration, the City of Tucson will put their first electric buses on the street by early 2020.

The FTA gave out $84.9 million to 38 cities across the nation to fund low or no-emission transit projects. With a portion of that money, the city's transportation department will partner with major bus manufacturer Gillig to replace three biodiesel buses that have been in operation for more than 13 years.

Tucson Electric Power will work with the city to set up charging stations for the new buses.

At first, the new fully-electric 40-foot buses will operate on the express routes only, but once Sun Tran drivers gain experience with the new vehicles, the plan is to expand the program to other routes, according to the city's transportation director, Diana Alarcon.

She said this new opportunity gives the city a chance to test how electric buses perform in the hot temperatures of Southern Arizona. If they do well, the city could purchase more. The Sun Tran fleet currently has 237 buses: 158 are biodiesel, 69 are compressed natural gas (CNG) and 10 are hybrid.

According to a report published by the World Resources Institute in May, the worldwide adoption of electric buses has accelerated in recent years, but it's not happening fast enough to help reach long-term global climate objectives.

The report states the investment in electric buses and other low-carbon technologies would need to double in the next 20 years in order to maintain global warming below the relatively safe threshold of 2 degrees Celsius.

So why are major cities struggling to convert to an all-electric fleet? The barriers to such a transition are more numerous than they might seem. Here in Tucson, the hot temperatures are not the only potential barrier city officials could face if they tried to convert their buses to electric.

To accomplish this, municipalities need to overcome financial, technological and institutional barriers, according to the report. More electric buses necessitate upgrades to a heavy-duty power grid capacity that can handle charging dozens of buses at a time (and during off-peak hours too, or else the city will have quite a hefty electricity bill to pay).

Upgrading the systems to meet this kind of electrical demand is expensive, but not impossible.

A charging facility of that stature would need a large amount of space but would also have to be close enough to the metro area that it wouldn't eat up the buses' batteries by the time they arrive at the point where their routes start. Charging stations could be set up at bus depots or along routes, but that also requires significant power upgrades in multiple places across town.

While electric buses have proven to be more cost-effective over time, the upfront expenses of conversion can prevent cities from making the switch.

"Conventional wisdom is that the use of electricity is more cost effective than CNG or diesel fuel," Alarcon said. "The advantage of this grant is that the city will be able to evaluate the cost effectiveness of electric buses before making a commitment on the best fuel type for the transit system."

The FTA provides funding to help replace the city's old buses, covering about 83 percent of the cost of a new bus. Alarcon said Sun Tran replaces about 20 buses annually as they reach the end of their useful life.

If the city were to commit to an all-electric fleet, she believes it would evolve over a number of years. It is probably more likely to see a mixed fleet of CNG and electric buses in the future.

In order to plan for more electric buses, the city would have to work with TEP to nail down specific requirements and then develop an infrastructure plan that would support them, according to Sherri Cadeaux, a senior communications specialist with TEP.

"We've done that in the past for the introduction of the SunLink modern streetcar and that did require substantial upgrades in energy infrastructure throughout the city to support that," she said.

TEP is also supporting electric shuttle services in Sabino Canyon. The utility company had to increase the power capacity in that area for charging stations.

Officials would have to nail down what the capacity in their current system is, what are the load factors, what time of day will they be charging the buses, and how much additional energy should be purchased.

"There's a lot of moving parts that would go into answering that, it's not a straight-forward simple solution," Cadeaux said.

Whatever the power needs may be, TEP is actively working on bringing in new resources, especially renewables, which are making up a larger percentage of their portfolio every year. Cadeaux says the utility company is preparing for when electric vehicles hit the market "full force" in the coming years.

"Sun Tran is just dipping their toe into the electric bus market now with this pilot program," Cadeaux said. "And I'm not sure that anyone can really tell looking into the future what their fleet might look like two years or five years or 10 years from now because technology is evolving, so I think we just have to work through the issues as they get there."