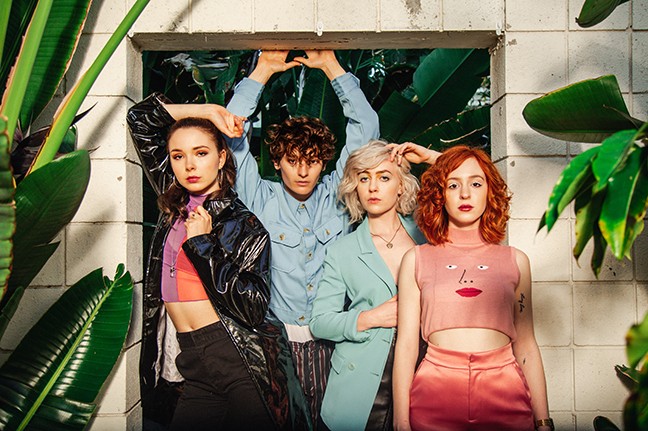 It has undeniably been a huge couple of years for Los Angeles indie-punk band The Regrettes. Really, they've been on the rise since releasing the excellent Feel Your Feelings Fool! album in 2015. Constant touring, a mark of their admirable work ethic, included two stellar performances at Coachella 2018 that resulted in them picking up an enviable number of fans.

August sees the release of their second full lengther, How Do You Love?, and frontwoman Lydia Night says that it's indicative of the growth that the members have naturally enjoyed since the debut.

"We just changed a lot as people and that's definitely reflected in the music," Night says. "We're all in a very developmental stage, me especially. I think I'm just growing up and learning more about personal emotions. A lot of the music is a reflection of that. So it's just a different perspective on a lot of things I think."

She's absolutely correct. How Do You Love? tackles Night's personal emotions head-on, to the point that it's practically a concept album about love.

"I was going through a lot of, I guess love experiences is one way to put it," she says. "Different relationships, and I kind of combined stories and songs that I had written from all of them to tell one linear story that made sense to the listener. I just thought it would be a different kind of approach and outlook on love. I thought it would be interesting to lean fully into the theme, because that's where my writing was heading."

Ultimately, the process of writing about her feelings towards a variety of relationships, tapping into emotions that were positive and negative, was therapeutic for the songwriter, and she feels it can be equally helpful for the listener.

"I think that's a great way to look at it," she says. "It starts off telling this cautionary tale and the person telling the tale starts to realize that it can be helpful and empowering no matter what happens. You can't let one thing stop you from trying to find what you're looking for. There's a lot of relatable music and lyrics on the album that I think people will connect to, hopefully. So I think that is therapeutic."

The release of the album has been preceded by three singles from it: "Pumpkin," "Dress Up" and "I Dare You." Just prior to that, they released a cover of Queen's classic "Don't Stop Me Now" for a Silk ad campaign, and a single called "Poor Boy"—an anti-Kavanaugh anthem in the wake of the controversy surrounding his nomination to the Supreme Court. Neither of those songs made the album.

"It happened super naturally," Night says, about that Kavanaugh track. "It was something we were all very aware of and discussing, and were pissed off by. One day we were all just writing, Genessa [Gariano] just started playing that riff, and I started writing random stuff. I didn't realize what I was singing about until halfway through writing it. It was like, 'Oh, OK, that's what this song is.' It was a quick process. As a songwriter, I think a lot of times that's your tool when you're angry."

It's interesting that the band was in the process of working on an album about the subject of love, and yet they couldn't fail to be impacted by the shit show that we're all living through under the current administration.

"I think the album takes a very empowered view," Night says. "I think that is a political thing, or should be. Right now, women especially but all humans with voices need that sort of confidence boost. Even though the album is a love story, I think a lot of the songs, if you take them out of that, are just about loving yourself and about not putting up with bullshit and listening to the people who will try to shut you up. That is something that we really need right now."

Sophomore albums are notoriously difficult, even at the best of times, and especially when the debut was so well received. Night says that she did feel a bit of pressure, but more of that was from herself. "I also just tried to avoid that as much as possible," she says. "I made it a huge goal to just focus on making the album we wanted to make. I think my main goal was making sure it was developed from the first one, and we definitely have a lot. I just didn't want it to be the same thing, and it's not."

We'll get to experience just how far The Regrettes have come when they perform at 191 Toole this week. Night won't, however, reveal anything about the set. "It'll be good," she says, but we knew that already. She does tell us that The Regrettes will be spending the rest of 2019, up to the holidays, on tour, as they seek to build on the not-insignificant momentum that they've built so far.

At this point, it's all about putting the work in and having no regrettes later. ■