Bump in the Night

Tabitha Turnpike has a MONSTERous Problem shines with childhood imagination 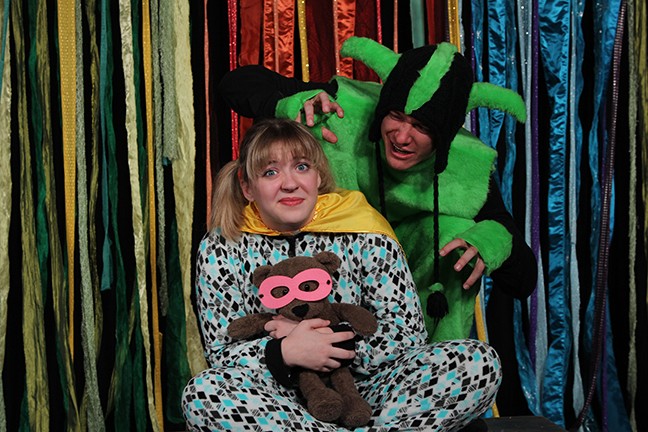 Courtesy Photo
Tabitha Turnpike has a MONSTERous problem on her hands.

Tabitha Turnpike has a big imagination. But, for her parents, Tabitha's imagination is nothing more than a big problem.

In the Live Theatre Workshop's original play, Tabitha Turnpike has a MONSTERous Problem, written by Richard Gremel and featuring original music by David Ragland, the titular character uses her bravery and creativity to solve a larger-than-life problem.

Under the direction and choreography of Samantha Cormier, this current production in the theater's family series is an enjoyable story for young audience members with a meaningful lesson aimed at adults. There are plenty of jokes that land with parents, and it features a plot that's easy to relate to at any age.

The costumes, designed by Stephanie Frankenfield, help pull viewers right into the story, and ensure the actors who split roles easily transitioned between characters. This was especially true of the monsters, who were the perfect mix of fluff and fright to be believable without scaring young attendees. And the simple sets were just enough to allow everyone's imagination to run wild.

In the opening scene Tabitha, played by Taylor Thomas, saves her doll from an evil henchman with time to enjoy tea before bed. She beautifully blends two big childhood dreams as a superhero who can fly and who is also a princess. She draws you into her rescue mission with just a few props and doesn't fall into a tired stereotype.

Unfortunately her superhero cape, fashioned out of an heirloom tablecloth, is the last straw for her mom and dad, played by Danielle Dodge and Mike Saxon respectively. Tabitha is grounded and sent to bed with no story.

But her troubles have just begun. As soon as her dad turns out the lights, she begins to hear growling from under her bed. Tabitha, who has just been told to grow up, can't tell her parents about the monster in her room.

Out from under her bed appears Squirble, played by William Seidel. After some shrieks from Tabitha and Squirble — as well as the audience — it's revealed that Squirble needs Tabitha's help. He's a monster trying desperately to join the Super Scary Society, but he's just not very scary.

They team up to convince the leaders of the society, Fangs and Spike, characters also played by Dodge and Saxon, that Squirble should be accepted despite his differences.

My five-year-old, who joined me for the performance, immediately fell in love with Squirble. Seidel's sweet performance, coupled with his very cuddly costume, made him a favorite. My daughter ran to give him a big hug at the end of the performance — a clear sign of approval.

And although Fangs and Spike were late additions to the ensemble, they were definitely stand-out characters. With their hilarious musical number (and a few fart jokes), they were just the right mix of menacing and lovable for everyone to enjoy.

On the flip side of Dodge and Saxon's monstrous performances as Fangs and Spike were their roles as Tabitha's parents. While they delivered some funny and familiar lines, their reactions felt a bit overblown. Perhaps this was because Tabitha's intended age was hard to pin down.

Many of the musical numbers felt lacking. While Spike and Fang's song was catchy and funny, others were far less memorable.

Despite these limitations, Tabitha Turnpike has a MONSTERous Problem is creative, funny and heartfelt. Running at just under an hour, it's a great early theater experience for preschool-aged children, and it has a story that kids in early elementary can also enjoy. ■