Why the Common Wisdom About TUSD's Declining Enrollment Is Wrong 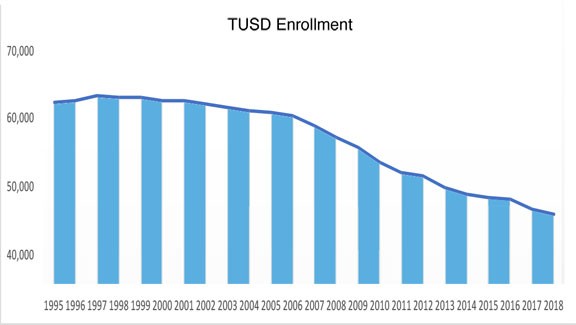 Two men I admire, Jim Nintzel, the editor here at the Weekly, and talk show host John C. Scott, have frustrated the hell out of me recently. Both men know more about Tucson and Arizona than I would if I lived another lifetime. Both are intelligent, perceptive analysts of the political scene. Neither accepts the “common wisdom” just because it’s what other people think.

Well, they don’t accept the common wisdom in most cases, anyway. When it comes to TUSD, though, Scott and Nintzel seem to go along with the prevailing notion that the school district is doing a terrible job and has brought its problems, specifically its loss of students, on itself.

Common wisdom always has a kernel of logic to it. If TUSD has lost an average of 900 students a year for the past 18 years, it’s only logical, it's something they’ve done. Isn't it? How can it not be the district's fault?

The problem is, the common wisdom about TUSD is wrong.

This all came up because of one of my recent posts, A Multi-Factored Look At TUSD's Enrollment Decline. My main point was that the district’s precipitous enrollment decline over the past 18 years has more to do with outside factors than with the district itself. Two of the factors were created by the state legislature when it green-lighted charter schools and open enrollment in 1994, creating two new forms of competition for students. The third factor is the city’s population, which essentially stopped growing around 2000, meaning TUSD hasn’t had an influx of new students to replace the ones who left.

When I talked about this on John C. Scott’s show, he came back with a litany of sins TUSD has committed which have led to parents pulling their children out of the district — problems with student discipline, poor administration, poor money management and so on.

Most of what Scott said about TUSD is true, but not his contention that the problems he listed are the primary reasons students have left the district.

Nintzel agreed with me about the mechanism for TUSD’s enrollment decline, but said I haven’t paid enough attention to parents' dissatisfaction with the district which led them to send their children elsewhere.

Nintzel is right that dissatisfaction with TUSD leads many parents to seek other options for their children, but often, their dissatisfaction has more to do with the changing ethnic and economic makeup of Tucson than anything the district has done.

The arguments made by Scott and Nintzel aren’t wrong factually. They’re wrong in emphasis, putting too much blame on the district and too little on national demographic shifts and Arizona’s Republican politicians’ continuing efforts to dismantle our district-based, publicly run school system by encouraging school privatization. Compound those factors with Tuscon’s glacial population growth over the past few decades, and you have a recipe for plummeting enrollment.

Unfortunately, their views mirror the local “common wisdom” about TUSD. Attacking TUSD has turned into a blood sport, and that’s bad news for the district and the city. When people magnify TUSD’s problems, it encourages even more people to leave the district. And the notion that TUSD is responsible for the problems it faces gives the impression that the district should be able to turn this thing around if it can just get its act together. What the district actually needs is thoughtful, incremental improvements to help it better serve the needs of the community.

Let me lay out what I believe to be true about the changing nature of TUSD and many similar urban districts across the country. Admittedly, this is a subjective view, but it’s based on extensive study of urban education in the U.S.

TUSD is like a lot like urban school districts around the country which find themselves educating an increasing number of low income students, many of whom are African American and Latino. Over the past few decades, the districts’ test scores have declined, and their enrollment has dropped.

No one should be surprised by low test scores at TUSD schools when a majority of their students come from low income families where parents often have a high school education or less. By the same token, no one should be overly impressed with the high test scores in districts like Catalina Foothills and Vail when their students come from homes with comfortable incomes and parents with college educations.

But maybe I’m going too easy on TUSD. Even if it makes sense to expect low test scores from its current student population, should they be as low as they are? Maybe if TUSD had its educational act together, the scores would be higher.

Fine. That a reasonable assertion. Let’s test it out.

If TUSD is doing a lousy job, if schools run by excellent administrators and staffed with competent teachers would get better results, local charter schools with student populations similar to those in TUSD should be kicking the district’s ass. After all, charters aren’t burdened by hide-bound administrations, musty old educational practices, unionized teachers and burdensome state regulations, all of which are said to bring down the quality of school district education. That’s why charters were created, right? To show school districts how it’s done.

Well, Arizona charters have had 25 years to prove they can succeed where school districts fail. But it hasn’t worked out that way. Students at some charters exceed expectations while others perform below the level you might expect. Which is exactly what you find at various schools in TUSD. Specialty schools like BASIS attract successful, motivated students and get stellar results, but the same goes for TUSD’s University High which attracts a similar type of student.

If you ignore the charter hype and look at the numbers, whether it’s in Tucson, across the state or around the country, charters and district schools that share similar student populations tend to group together in their high stakes test scores and other measures of academic success. There isn’t the night-and-day difference you would expect if the districts like TUSD were failures.

Here is the conclusion I draw from the district/charter comparison: If local charter schools haven’t been able to put TUSD to shame, then the people of Tucson should stop shaming their district as well.

But that begs the question: If charters are no better than district schools, why do students continue to leave districts and head over to charters? Right now, 15 percent of the state’s school children are in charter schools, and the number keeps growing.

Charters have a few advantages over districts which have nothing to do with the quality of the education they provide. Their growth has been stimulated by the encouragement they have received from our state's Republican politicians, including those who have run the department of education, since the first charters opened in 1995. And they have gotten additional help from the national school privatization industry which spends hundreds of millions of dollars a year pumping up charters’ reputation and infusing the schools with funding beyond what they receive from the state. Put those forces together, and Arizona has the highest percentage of students in charters of any state in the country.

Charters have been sold as the Next Big Educational Thing. And I use the word “sold” advisedly. A full-blown public relations campaign has made charters look like New! Improved! versions of the public schools which preceded them. Parents who are looking for something better for their children hear again and again, charters are the answer.

With charter school names including words like “College” and “Preparatory” and “Academy,” who wouldn’t think the schools will guarantee their children a shot at a college education? With charter cheerleaders chanting, “You say charter, we say BASIS! You say charter, we say BASIS,” who wouldn’t think their children will attend a charter school like BASIS, which claims, falsely, to turn ordinary students into academic superstars?

The rapid growth of charter schools is a matter of PR over performance.

But charters aren’t the only thing drawing students in the TUSD attendance area away from the district’s schools. Open enrollment, which began at the same time as charters, allows parents to enroll their children in any school with an empty desk, in any district they want. That means for the past 25 years, TUSD area parents have been able to load their children into their SUVs and drive them to schools in neighboring districts like Catalina Foothills and Vail.

As with charters, it’s possible to say, if TUSD-area parents take advantage of open enrollment and send their children to schools outside the district — I estimate there are between 3,000 and 6,000 children in that category — that proves TUSD is doing a poor job educating its students. Clearly, the district is driving parents away.

But there is another, more likely explanation which is as old as the push for school integration in the 1950s and 1960s: White Flight. Ever since white parents have seen their children’s schools filling with students from other ethnic groups, they have been fleeing to the suburbs where they built shiny new school buildings filled with students who look like their children and come from similar backgrounds. White flight feeds on itself. The more white parents leave the city, the more black and brown the city schools become, which encourages more white families to follow the earlier emigrants.

Prior to 1995, Anglos who wanted to send their children to schools in other districts to escape the ethnic diversity of TUSD schools had to pull up stakes and move. Now, with open enrollment, they can stay put and ferry their children across district lines.

I don’t blame TUSD for Whites fleeing the city any more than I blame the African American family which moves into an White neighborhood for the For Sale signs sprouting on their neighbors’ lawns. It is all part of our country’s shameful heritage of racial animus and discrimination.

Regardless of the reasons for TUSD’s declining enrollment, the drop in student population leaves the district in a precarious situation. And we can expect enrollment to continue its decline unless the city’s population takes an upward turn or charter schools become less popular. Either is possible, but neither can be counted on.

Regardless of the reasons for TUSD’s declining enrollment, the district has to marshal whatever powers it has to slow or stop the downward trajectory. One hope is, from knowledge, the district and the city can draw strength. If we understand the underlying causes of the district's enrollment decline and support the efforts to improve the quality of its education incrementally rather than condemning TUSD out of hand, we have a reasonable chance of creating a stronger, more successful school district.
© 2022 Tucson Weekly