Arizona farmers can legally grow industrial hemp, but will they take the risk? 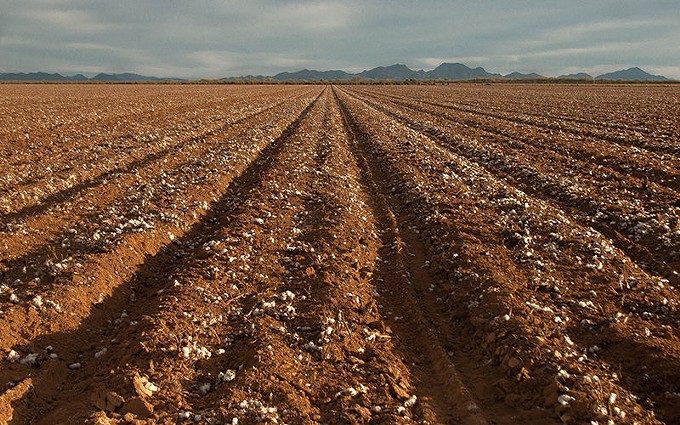 Photo by Meg Potter/Cronkite News
Industrial hemp will be legal for Arizona farmers to grow this summer. The crop will be heavily regulated, as it’s required by law to be below 0.3 percent THC.

Gazing over the cotton fields on his 300-acre farm outside Casa Grande, Paul Ollerton weighed the risks and opportunities of a new crop that, come this summer, will be legal to grow for the first time in decades.

Ollerton, 64, is a third-generation farmer who has just harvested his 38th cotton crop, and he's cautiously looking to get involved with industrial hemp.

"God knows we need something that's a little bit more profitable than what cotton has been for the last few years," he said.

Hemp holds promise and potential for farmers like Ollerton, who are looking to diversify their crops or find new ways to make money in farming. But it's also a gamble.

Arizona law requires industrial hemp to have a concentration of THC, the main psychoactive compound in marijuana, of less than 0.3 percent. That can be tricky to achieve; farmers might have to destroy everything in their harvest exceeding the threshold.

If Ollerton gives hemp a try, he will likely start small, just to be safe.

"I tell everybody, 'Be cautious and start with small acres and go from there, see what works for you on your farm,'" he said.

Hemp used to be considered a Schedule 1 controlled substance, a category that includes such drugs as heroin and ecstasy. But the 2018 Farm Bill, which President Donald Trump signed in December, changed that, opening the doors for farmers to grow hemp as an agricultural commodity. The bill removed hemp from the Controlled Substances Act, meaning it's no longer an illegal substance under federal law.

Hemp can be used to make a lot of different products, from clothing and cosmetics to insulation, rope, plastic and food. It can also be grown for seed, fiber and oils, such as hemp-derived CBD, which is used for pain relief, anxiety and insomnia.

Arizona and at least 40 other states have enacted legislation to establish an industrial hemp program, Mindy Bridges, senior policy specialist with the National Conference of State Legislatures, said in an email.

In some states, like Colorado, Kentucky and Kansas, the program is well underway. Arizona and others still are developing the rules that will govern the industry, including what to do with crops whose THC levels exceed the 0.3 percent maximum.

"There's so many ways it might go," said Brian McGrew, hemp program manager for the Arizona Department of Agriculture. "Complete destruction of the crop, as some states have done, if it tests over. It's all going to be based on what resources are available for the grower and the state, and what technologies might exist."

The department appointed a seven-member advisory committee to work on developing the rules. One of its biggest hurdles, McGrew said, is trying to determine how to address the requirements limiting the THC threshold on crops. That is key for farmers, because every acre that goes to waste is money down the drain.

"That is my biggest concerns, because you're going to end up with quite a bit of money per acre tied up in a crop," Ollerton said. "And you don't want to end up in a situation after you've put all the money into it and you've grown it, and 120 to 150 days later you've got to destroy it because you can't get the THC levels where they need to be for it to remain as hemp."

Ollerton—whom everyone calls Paco, a nickname from an old Robert Mitchum Western movie, given to him by his father—co-chairs the committee. He has spent most of his life growing cotton, a pillar of the state's economy.

"When I went to college, it wasn't like when spring break rolled around I got to go to Mexico or skiing," he said. "I always came home and worked. Same thing during the Christmas vacation."

His grandfather, who ran a cotton gin, farmed and worked as a cotton broker after moving to Arizona from Utah about the time he served in World War I. Ollerton's father started farming once he returned from World War II. Now, Ollerton's two children are involved in agriculture.

"Agriculture runs in the blood," he said. "It's a DNA defect."

To him, farming is more than just a business. It's his survival.

For some time, hemp has attracted the attention of environmentalists over claims of it being the new water-friendly crop. Lawmakers and conservationists have said that hemp uses less water than cotton. In a state with an ongoing drought where farmers are already faced with not having enough water to farm all of their acres, implementing water-efficient commodities is critical.

Ollerton is skeptical. He said there has been no research in Arizona attesting to hemp's lower water usage.

Abdel Berrada, a senior research scientist at Colorado State University who spent the past three years studying how the crop grows, said hemp may need less water than corn, but not by much. What he did find, though, is that hemp's water consumption varies by location.

"Usually when you try to figure out how much water a plant uses, everything from rain to irrigation to the soil is taken into account," Berrada said.

Because the Southwest doesn't get much rain, farmers have to use irrigation to get a decent yield, he said.

"The bottom line, I'd say, is I don't know if it uses less than cotton, but it does need water to grow and do well," he added.

In Colorado, farmers have been growing industrial hemp since 2014. And the Centennial State has taken to the industry extremely well, said Zev Paiss, who created and served as the founding executive director of the National Hemp Association.

"Hemp touches on many different industries in a sustainable way," Paiss said. "We are at the very beginning of discovering all the benefits of it. Many industries are tapping into it, a lot of jobs are being created, a lot of local governments are getting tax revenue, it has a wide variety of tax benefits."

The legalization of industrial hemp re ceived bipartisan support in Colorado and Arizona. In 2018, Gov. Doug Ducey signed legislation backed by Republicans and Democrats that authorized the Arizona Department of Agriculture to license applicants to grow and process industrial hemp.

To Paiss, hemp's bipartisan appeal comes from the fact that it has "so many benefits that are basic things—jobs, tax revenue for small towns. It's good for farmers and it's good for the land." He added: "It's about supporting our farmers, it's about U.S. jobs, it's about generating income both for cities and for states."

Arizona's industrial hemp program was slated to start in August, but a bill proposed by Sen. Sonny Borrelli, R-Lake Havasu City, and signed into law by Ducey on Feb. 20, moved it to May 31. That means farmers can start planting hemp before the peak of the summer, when temperatures are too high.

Hemp and marijuana both come from the Cannabis sativa species, but they are not the same plant. Hemp has a very low concentration of tetrahydrocannabinol, or THC, which is what gives marijuana its psychoactive effect.

"I like to tell everybody, expecting to get high on hemp is (like) expecting to get drunk on a case of O'Douls," Borrelli said, referring to the non-alcoholic beer. "It's impossible. You're just going to really disappoint yourself."

Because hemp and marijuana derive from the same species, Borrelli said, there has to be stringent licensing requirements in place. If somebody grows marijuana in their hemp fields and gets caught, he said, that grower will lose his crop and be in a lot of trouble.

"It's interesting," Ollerton said, "because it's very similar looking, and we're afraid that we're probably going to have a lot of people walk in there and start pulling stuff off. But I tell them, 'By the time you dried it, rolled it and smoked it, you'd probably die from smoke inhalation before you'd ever get high off of it because the THC levels are so low.'"

Sean Dugan, a third-generation farmer and co-founder of Item 9 Labs Corp. in Coolidge, which grows, manufactures and sells marijuana products in dispensaries in Arizona and will be in six to 10 U.S. markets by the end of the year, is also looking to get involved with industrial hemp this summer, but on the processing side.

The company's goal is to have a processing facility up in a year to handle up to 500 acres of hemp per year, he said. Dugan's background is in dairy farming: His family moved to Arizona from Wisconsin in the 1960s, and he's been farming in the state for 20 years, which is why he wants to head Item 9's hemp division.

His only concern in joining the hemp industry is for the farmers.

"Truthfully, I think there's going to be a lot of fast-talkers that want to make a quick buck," he said. "That are going to sell farmers on bogus products, bogus seed or bogus genetics. That's why at Item 9, we want to make sure they don't get bamboozled into a failed crop or lose a bunch of money."

He is betting on hemp taking less water than cotton does, which would make it significantly attractive as a crop in the desert.

"With the water situation going on, if some guys can save a little bit of water and be just as profitable, I mean a lot of these guys have farmland available to them, but they don't have the water to farm it," Dugan said. "So if they can actually utilize that little field andgrow minimal amounts on it, it's a savings to Arizona water and the farmers' expenses. All the way around, it's a good deal for everybody."

Hemp has had a complicated history in the United States. It was utilized for hundreds of years to make rope, twine and cordage – the ropes attached to the rigging of a ship—but it was never abundantly grown here, said John Dvorak of Boston, a hempologist who has studied the plant for 25 years.

The vast majority of the hemp that was used to make these products came from India, China, Germany and Russia, he said. Russia, for example, grew millions of acres of high-quality, low-cost hemp, so it didn't make sense for American farmers to invest in growing it.

The Marihuana Tax Act of 1937 didn't exactly make growing hemp illegal, but it put so much regulation on it, so much "red tape," that farmers essentially stopped growing it, Dvorak said.

It made a brief comeback in World War II, when the Japanese invasion of the Philippines cut off hemp supplies to the Allies. In 1942, the government created a campaign called "Hemp for Victory," and the Department of Agriculture produced a short film that encouraged farmers to grow hemp as part of the war effort.

As soon as World War II was over, though, the federal government ended incentives and, Dvorak said, "basically made hemp illegal again."

Now, it may well be the next big thing in agriculture.

The Arizona Department of Agriculture and the industrial hemp program rules committee are still developing the program's rules, which have to be completed by the end of April. They are also debating the program fees, including how much an industrial hemp license will cost; there will be four types of licenses: grower, harvester, transporter and processor.

The crop takes about 120 days from planting to harvesting. That means that if Ollerton begins planting hemp by June 1, he'd be harvesting some time in October.

"There is some risk," he said. "And unfortunately in agriculture, the farmer takes most of the risk, if not all of it on the growing end."