Curry Up and Visit 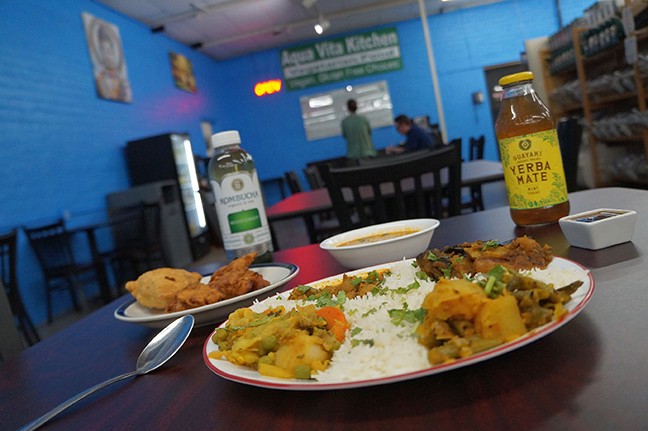 It's really hard to imagine a time before Whole Foods, before Sprouts, before corporate-operated "health food" fronts moved in and became the consumer's norm. We can liken it to the usual axiom: Can you recall life before the internet? Most people over 30 admit, 'Yeah, we can,' with the added assurance that it both sucked and ruled. Things were great but, man, that internet sure is convenient isn't it?

Small-venture health food stores have been dotting neighborhoods for decades and, unfortunately, they seem to be a dying breed. As they struggle to keep up with bin food meccas, mom-and-pop depots hustling wheat germ and soy-based aperients sometimes have to give in and accept that the masses like big shiny things.

But a hopeful survivor remains on the corner of Glenn Street and Country Club Road, still in business after three decades.

Aqua Vita literally means "life water" but has had its struggle to stay afloat. When the original owners were looking to get out and find a new venture in Oregon, they had a chance meeting with a young upstart named Harmeet Singh during a health expo in California. Singh and his family took over in 2007, although it hasn't been the easiest of business venture rides.

"When I met the original owners, I was working for a small health food store in Phoenix," Singh says. "That store was about a third the size of Aqua Vita, with half of the inventory. I knew I had a lot of hard work ahead of me, but I didn't know it was going to be this hard."

Suddenly having to deal with a substantial distilled water section and an extensive vitamin and bulk herb inventory, Singh learned quickly that it's a daily battle to be your own boss for a niche concept, such as low impact health. But he fought the good fight and was able to make Aqua Vita even more successful than before. Then tragedy struck in 2010 when he got a call at 6 in the morning from the fire department, letting him know the store was on fire.

"When I arrived, it was mostly contained," Singh remembers. "The interior wasn't badly damaged, but the back and exterior were destroyed."

It took three months of complete renovation, and a lot of capital, to get Aqua Vita back in business. Thanks to loyal customers and a supportive community, they reopened stronger than ever. That is, until a Sunflower market opened nearby.

Singh found that keeping organic fruits and vegetables fresh was a daily burden. The waste was more than the profit, as he donated a lot of the "ugly" and day-old produce to local charities.

In 2018, Singh and his family followed the suggestion of some of his customers and replaced the produce area with tables and chairs while turning the back area into a workable kitchen.

In November 2018, Aqua Vita, without any real promotion besides word of mouth and social media mentions, began offering fresh, hot Indian-inspired fare. To this enthusiastic fan of Indian food who lives just a few blocks from the store, this seemed like a beautiful enterprise.

The food is what you would expect from Aqua Vita; tasty, simple, vibrant and quite reasonably priced for what you get. The Samosas (around $3.99) are generous triangular fried pods filled with potatoes, peas and their own stock of herbs and seasonings. The Lentil Soup ($3.99) is easily one of the best in Tucson, as are the Veggie Pakoras ($3.99) and the Naan ($1.99). Their rotating selection of entrees reflects what is available and what is in season, usually including the sumptuous roster of aloo, curry, matar and gobi, all of which contend in our ever-growing selection of Asian and vegetarian eateries.

"We are here to serve the people and we are doing our best to make them happy," says Singh. "Serving food is very new to us so we are looking forward to keeping this up and making it succeed."