Arizona History Museum honors resilience in tales of Jan. 8 and the Bisbee Deportation 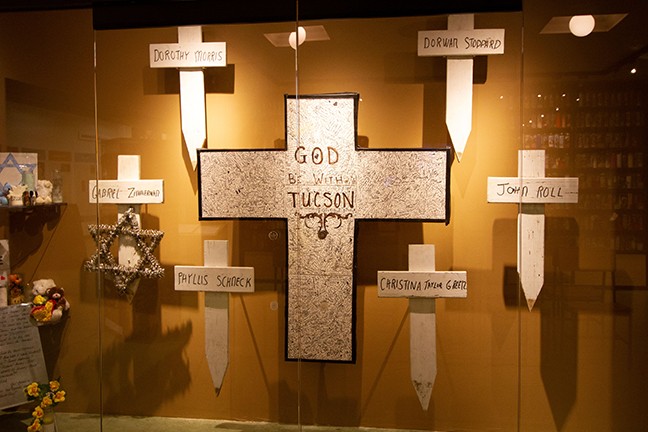 Shortly after the Tucson massacre of January 8, 2011, an unknown mourner planted six crosses across the street from the Safeway parking where 19 people were shot.

Each of the small white crosses bore the name of one of the six who died: Christina-Taylor Green, age 8; Gabriel Zimmerman, 30; Judge John Roll, 63; Dorothy Morris, age 76; Dorwan Stoddard, 76; and Phyllis Schneck, 79.

These heartbreaking crosses, with their rough, hand-painted names, now stand inside the Arizona Historical Society, a memento of one of the worst days in Tucson's history. (Thirteen people, including then-Congresswoman Gabrielle Giffords, were badly injured, shot by the same Glock semi-automatic pistol the mentally ill gunman used to kill the others.)

It's hard to look at these crosses, arrayed like tombstones, and to read the names of the dead, a task made even harder by the never-ending mass murders of our times, most recently in Sri Lanka and New Zealand.

The crosses, and other hand-made mementos left by bereft Tucsonans, are in the museum as part of an unusual exhibition, Stories of Resilience: Overcoming Adversity in Arizona History. The artifacts are here to honor those who died, to be sure, but they're also meant to applaud the positive ways the people of the city responded to the tragedy and how they picked themselves up and moved on.

Recently retired museum director Les Roe "wanted to do something on the Jan. 8 shootings," says David Turpie, vice-president of exhibitions, "but he wanted to do more, and show that Tucson is a resilient community."

The written notes, drawings and candles left at three impromptu shrines—at the death site, at Giffords's office, at the hospital then known at University Medical Center—emphasize love and healing. "To the stars through difficulty," one note reads. "Be well and whole."

Videos feature commentary by a number of notables, including Ron Barber, a Giffords aide who was wounded and later held her congressional seat. Giffords herself dealt with her painful loss but is working to pass sensible gun laws.

Stories of Resilience is about far more than that murderous day though. The show examines not only the aftermath of the shootings, but the resilience shown at multiple times in Arizona history, past and present.

A series of 11 posters recount the remarkable lives of 11 unsinkable Arizonans from the 19th and 20th centuries. One of them, Wong Choy, was a Chinese immigrant who traveled alone to Arizona in 1877 at the age of 12. Wong did back-breaking farm labor in Cochise County, earning little money for putting food on Arizonans' tables for some 50 years, even though, as Turpie notes, "he was not always welcome." After a rare trip back home to China, he was detained for a month in Angel Island, but still he persisted, going back to the fields to work.

Breaking away from the fairly traditional poster format, Tucson painter Kim Nicolini exhibits expressionist paintings that capture the sheer grit that keeps working-class Tucsonans going day in and day out. Her brightly colored portraits of faces show the anxiety of the poorly paid, with deep creases crossing the brows of people who mop floors or do nails or wash dishes..

Bisbee artist Laurie McKenna examines the Bisbee Deportation of 1917 in her meticulously researched installation The Undesirables.

Fresh from a solo stint at Tohono Chul Park, the installation tells the appalling story of another terrible day in Arizona history, July 12, 1917. In cahoots with the Phelps Dodge mining company, the Cochise County sheriff and a thousand hastily appointed and armed deputies unlawfully dragged almost 2,000 striking miners from their Bisbee homes at gunpoint.

The miners, many of them immigrants, most of them union members protesting poor conditions and discriminatory pay, were marched to a baseball park, unceremoniously loaded onto railroad cattle cars, and dumped 90 miles away in the remote New Mexico desert. None of them were ever again permitted to return to their homes in Bisbee.

A federal investigation determined that the mass kidnappings were "wholly illegal and without authority in law." No one was ever convicted of the crimes.

To honor each of the deported men, McKenna made 1200 rubbings of a 1917 penny on paper. The rubbings hang in a solemn array on the wall. Much like the crosses of the Jan. 8 dead, each one is marked by the name of a banished miner: Anton Jovanovich, Pat Brophy, Carlos Quihuis. The artist also made haunting charcoal drawings of the miners—one picturing the long line of men on the forced march is particularly fine.

Shockingly biased newspaper articles of the day are displayed. The Arizona Republic used the word "agitators" to describe the kidnap victims, and described deportation as a dandy way "to quiet down strikers."

Issues of "loyalty" vs. free speech were key in the deportation. The copper miners demanding fair pay were portrayed as disloyal subversives who were jeopardizing U.S. efforts in World War I. State legislator Rosa McKay had to flee when she was attacked by the pseudo deputies: her crime was trying to send a telegram to the outside world detailing what was happening in Bisbee.

Historians are only lately tracking down the trajectory of the miners whose lives were dramatically disrupted; we don't yet know whether they were resilient in creating new lives for themselves.

But we can say that like the resilient cashiers and cleaners in Nicolini's portraits, the miners heroically went to work each day. They worked poorly paid, dangerous jobs that benefited the nation, and they did what they could to promote justice.