The first moments of 2182 Recording Company’s vinyl career begin with a single metallic chime building a dark ambience. Soon other alien sounds drift in: off-kilter strings, distant throat singing, sourceless noises skittering on the periphery. This is the landscape of Beyond All Defects, the new collaborative album by Sir Richard Bishop and W. David Oliphant, released by Bisbee-based record label 2182. 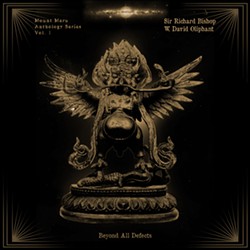 
Bishop, guitarist and vocalist of the wildly experimental (and wonderful) Phoenix group Sun City Girls, brings no lack of imagination to the table in this collaboration with "sound artist" Oliphant, who's made a career out of fusing homemade instruments, tape distortion and occult atmospheres.


Beyond All Defects is an experimental album entrenched in the hypnotic sounds of Tibetan Buddhism. The ominous atmosphere is filled with indecipherable chants, droning horns and nearly submarine drums. With only six tracks on the album, many songs reach far past standard run times. But then again, there’s nothing standard about this album.


There is an incredible sense of space to Beyond All Defects, but at the same time it manages to feel claustrophobic (not in the pejorative sense). The mind-bending instrumentation combined with Tibetan motifs should make this album feel otherworldly to Westerners and any grounded souls alike. It is almost akin to a Lustmord of the far-East.


While the first half of Beyond All Defects is brutal in its rapid chanting and haunting sound collages, the second half opens up for more meditative ambience. But this is not to say the suspense and dissonance truly ever subside. The occasional field recordings bring the listener back to the surface, before the infernal timbres submerge them once again.


This is not for casual listening, and could more than likely send a listener to another plane of existence if they’re not careful.


A collaborative endeavor by Oliphant, Robert Anderson, and Ryan J. Bruce, 2182 Recording Company aims to release music that engages "beyond just listening" and is "rooted in a history of creation in Arizona that involves people that were inspired and supported by people who do things differently".


Looking ahead past this first release, 2182 plans to release a triptych (or three-piece art project) from Sun City Girls, Sunn Trio and The Alternative Particle Choir. 2182 Recording Company, named after the 2182 kHz used as the distress frequency on shortwave radio, should certainly remain on the radar of any Arizonans seeking to hear things beyond the veil.