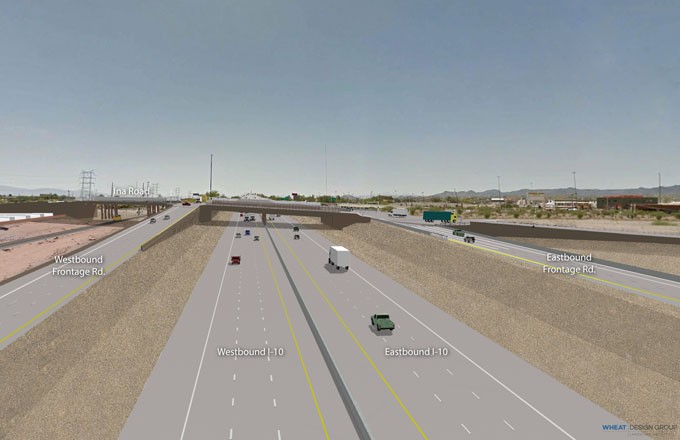 Courtesy ADOT
Illustration of the finished product.
Two years after work began, relief is on the horizon for commuters in northwest Tucson. Interstate-10 at West Ina Road will re-open next week.

The $128 million-dollar project includes a four-lane overpass spanning the Union Pacific tracks, the interstate and a separate bridge over the Santa Cruz River. Barring unforeseen weather conditions, the exit and entrance lanes connecting the interstate to the overpass will be fully operational in time for Tuesday morning rush hour, according to ADOT Public Information Officer Tom Herrmann.

The final step in the project is a one-lane expansion each way on Ina Road, from the interstate to the Santa Cruz River, which Herrmann expects to be completed in two months’ time.

Herrmann called the reopening of the exits and on-ramps along Ina and I-10 a seminal moment for Southern Arizonans.

“This is a tremendously exciting time, not just for ADOT, but for the community around Ina Road,” Herrmann said via email. “It represents the third interchange along I-10 we have completed in recent years—following Prince and Twin Peaks. In every case we have improved traffic flow and safety by reconstructing the interchanges to have the surface street go over both I-10 and the railroad tracks. This also should provide a strong economic boost for Marana and the surrounding area.”

Hermann added that construction is scheduled to start this fall on a similar project at Ruthrauff Road.