In a Rabelaisian celebration of liberation from restraint and societal dogma, under the stewardship of Tucson Libertine League’s Lola Torch, Reveal: A Debut of Burlesque Performances unveils itself at 191 Toole. Details here. 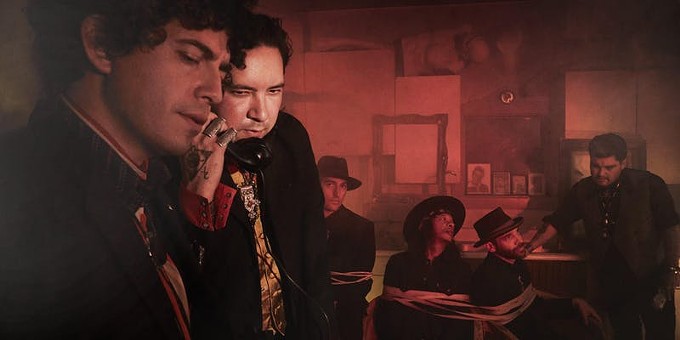 Courtesy of Eventbrite
Looking for something from the underground? From D.C. post-punk/darkwavers Social Station willfully enter The Shit Dungeon. With Vasectomy and Lav Andula in tow. Details here.

Since 2005, these multiple Best of Tucson winners for Best Cover Band channel new wave classics, pop and power ballads from what could be your favorite decade. 80s & Gentlemen rock on the rooftop at Playground. Details here.

What a Good Day. Hailed by Albert “Ice Man” Collins, as “One of the brightest young stars on the blues scene today.” Carvin Jones brings The Big Time Souvenir Tour to 191 Toole. Details here.

He’s had a lot on his mind. Singer/rapper Jake Miller is still “Drinkin’ About You.” At The Rock. Pop rockers Just Seconds Apart and Logan Henderson share the bill. Details here.

Imbued with the sabor and infectious rhythms of Bolivia, Peru, Brazil and Colombia. Baracutanga ignite the dance floor at Monterey Court. Details here.

Pushing Buttons: A Monthly Producer Getdown is host a Battle of the Beats. At Thunder Canyon Brewstillery-Downtown. Details here.

From British Columbia, this singer-songwriter’s writing style hovers somewhere near that of Jackson Browne, Gillian Welch and The Woods Brothers. Sam Weber follows the Shadows in the Road. At The Sea of Glass Center for The Arts. Details here.

Courtesy of The Sea of Glass Center for the Arts

Capturing a futuristic vibe, with alien basslines and gangster beats, Space Jesus navigates his interstellar vessel through a traversable wormhole. At the Rialto Theatre. With electronic/bass/trap artist Buku. Details here.