Explore the boundaries of human nature 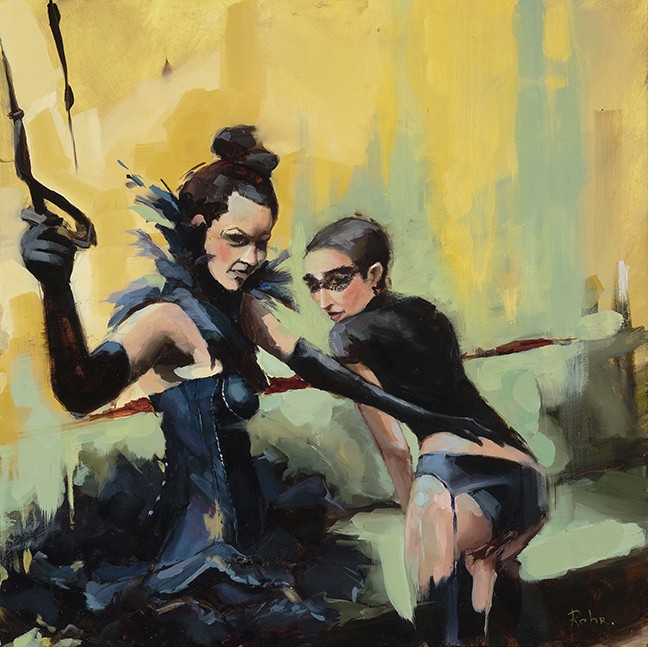 Courtesy
Explore the artsy side of your kink.

Sculpture Resource Center artist Joshua Woodhall says he's been doing art ever since he had the motor skills for it. He has this memory of checking out a library book in middle school and drawing something lewd on its pages.

"The silly librarian took it all over looking for who drew it," he says. "Everybody got to see my boob drawing."

Event organizer Inna Rohr met two burlesque performers at last year's event, and was so impressed by their sexual energy that she created a series of paintings featuring them.

"They were both really strong and powerful, and the had this absolutely magnificent presence about them," she says. "The series addresses same-sex relationships and intimacy and how it doesn't matter who you are because love is still love."

This is Rohr's fifth year being involved with the festival. Last year, her featured pieces were playfully positioned bananas and donuts. But she spent much of her last year traveling the world, including visiting family in Estonia. In some places she visited, same-sex relationships aren't yet normalized.

"The work I was inspired to do there inspired some conversations, and inspired some mind changing," she said. "That was a cool conversation to have... It's such a beautiful thing to be in love and to express your feelings and to be OK with it and not worry about what other people would think."

The cover art she created for the festival also features two women. One of them (the one holding the whip), who goes by the stage name Fiametta Mink, is in charge of organizing the performers for this year's event. Mink didn't find her way to burlesque until her 40s, and she said last year's Tucson Erotica was a particularly good place to perform—she and the other dancers weren't on a stage, so they were practically face-to-face with audience members who were as respectful as they were enthused.

"It's a very comfortable place to express your sexuality," she says. "I really want to showcase diversity and sensuality at this festival. There will be a really wide range of performers and artists that will appeal to a lot of different people."

Rohr shares the same fondness for the diversity of the show's art: It's not juried, so any artists who wanted to exhibit (and submitted pieces on time) were welcome.

"I think it just kind of brings everyone closer," Rohr says. "Because it can be taboo to talk about the subject, and turns into a kind of celebration of being human."

Tucsonans can see the exhibit at the SRC on weekends, and can enjoy the special events the artists have planned throughout the month. On Saturday, April 13, check out the Hues 'n' Booze for adults, in which you can paint your very own erotica from 4 to 6 p.m. On Saturday, April 20, you can attend an "Awakening" Sexuality workshop from 10 to 11:30 a.m. On Saturday, April 27, take your chance to learn how to do some burlesque dancing from 4 to 5 p.m. And on Sunday, May 5, see the festival off at the closing reception from 6 to 9 p.m.

"Certainly, everyone has their own tastes," he said. "But [shows like this] could enlighten us not to be afraid of it. And that's what art's all about, is enlightenment."