A new take on a biblical villain 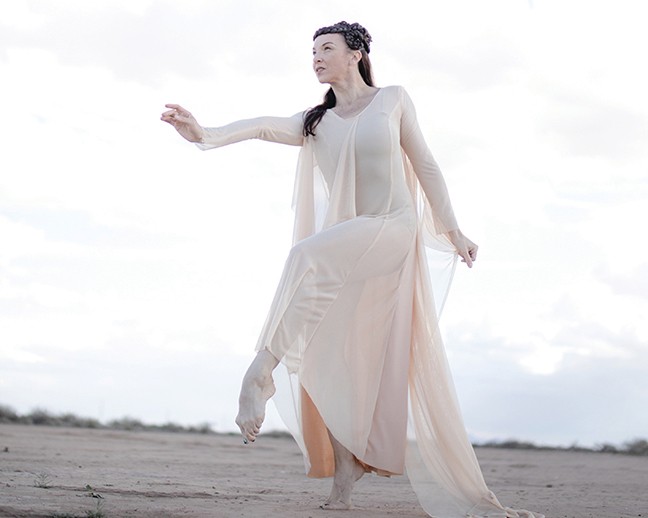 Almost everybody, religious or not, knows the story of David and Goliath.

Told in the Book of Samuel in the Bible (you can look it up at 1 Samuel 17), the battle between the brave shepherd boy and the combative giant takes place in the midst of a showdown between two warring armies. The Philistines' champion, the enormous Goliath, challenges the Israelites to send out one man to do battle with him. Terrified of his monstrous size and fierceness, the Israelites refuse.

But young David accepts the challenge and marches into the battlefield, confident that God is on his side. Deftly aiming his sling at the giant's head, David slays him with a single stone. The massive Goliath falls to the ground and David slices off his head.

It's quite a story, but it's not the one Ashley Bowman wanted to tell in the narrative dance that she debuts this weekend. The evening-length dance is called Goliath–A Story Retold, with emphasis on "retold."

"This has little to do with the biblical story," says Bowman, co-artistic director of the long-running Tucson troupe Artifact Dance Project. "I was never interested in David and Goliath. I didn't want to tell the story of a big horrible character."

Nor did she want to portray the battle that brought the two combatants together.

"My dance is not about war," she says. "It's more about Goliath as a psychological symbol."

Danced by the company's talented Marquez Johnson, Goliath is a troubled god who's been cast down to Earth from the heavens. The contemporary dance work, featuring no fewer than 10 dancers, tracks his journey through the desert, where he moves from ignorance to knowledge, from darkness to light.

"Goliath is a powerful god but he doesn't understand the true power of himself," Bowman says. "The personal journey is the main theme."

Marquez is "amazing" in the part, she adds. "I knew he could do this. He's incredible. He's a hero in the way he moves."

Bowman has investigated biblical characters before. In fall 2017, she created Judith, a narrative dance that hewed fairly closely to the biblical story of a heroine who saves her people.

But Goliath was inspired more by music than by text.

Last March, Bowman heard a new album by Zack Hemsey, a composer who makes music trailers for the likes of Game of Thrones and the science fiction film Inception. Bowman had been following Hemsey ever since he gave Artifact permission to use a piece of his music in the trailer for the troupe's Seven Deadly Sins several years ago.

But she was entranced when she listened to his new album, the curiously titled Goliath–The Soundtrack to a Film that's Never Been Made.

"I loved it!" she exclaims. She knew instantly that her next dance would be about an unconventional Goliath.

"I reached out to see if Zack would let me use it for a dance piece. He was open to whatever I wanted to do. I used all the music, the entire album."

The wordless score, she says, "tells a story, with 27 short pieces, each one to four minutes long."

Artifact normally insists on having musicians play live in company concerts, but Bowman is making an exception this time with Hemsey's recorded music.

The storyline that Bowman wrote to go with the music is more Aesop's fable than biblical text.

"It's a simple story," she says, but her co-artistic director, Claire Hancock, who's been getting attention as an actress in local theater productions, recorded a voiceover narration to help the audience understand the voiceless story.

"It glues it all together," Bowman says.

Hancock also dances two roles in the concert, portraying both a Great Spirit who created the world and a surprise figure on earth.

Viewers expect a David in any story about Goliath, and Bowman doesn't disappoint. As Goliath journeys through the wilderness, he encounters David, danced by Jeff Griffith, a "powerful, beautiful dancer."

But both men are different from their biblical counterparts. David is a "broken hero," Bowman says, and Goliath is a "fallen hero. Both are struggling."

Acting as a Greek chorus, eight dancers accompany Goliath in his every move. In the heavens, they help him open and close the magnificent wings that daily usher in the night and the day, the darkness and the light. Traveling with him on Earth, costumed as strange creatures, they dance with him, echoing his emotions and teaching him how to become a better man. In one scene, they even form a slithering centipede.

Dancer Becky Belanger gets a star turn in "Loneliness," a duet with Marquez, but Bowman considers all 10 dancers in the show to be co-equals.

"All the roles are principals," she says.

The dance marks a "real milestone for me as a choreographer," Bowman says. Blending modern dance with ballet, and including includes acting, partnering and intensely physical movement, "it's contemporary dance but more so."

Lighting artist Don Fox—who beautifully lit the troupe's "Surrounding Dillinger" two years ago—was Bowman's "biggest collaborator" for the show. Fox conjures up a desert with dramatic light and colors; in one scene, his wizardry even suggests a shimmering lake.

The dancers wear earth-toned tunics and dance dresses that "are flowing and minimal," comfortable enough for the dancers to perform in, Bowman says.

Usually a seamstress makes the costumes for Artifact, but for this dance, so close to her heart, Bowman designed and stitched the outfits herself.

As she says, "I wanted to do everything in this show!"