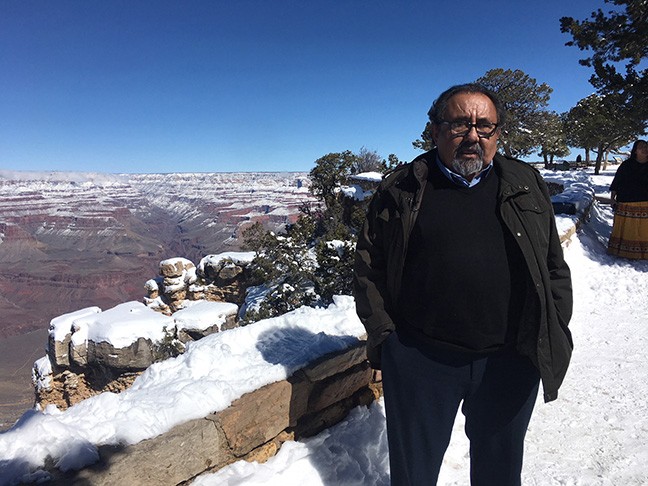 Photo by Lillian Donahue / Cronkite News
Rep. Raúl Grijalva, D-Ariz., expects opposition to his proposed permanent ban on uranium mining. “The mining industry is not going to go quietly in the night,” he said. “I think the majesty of the Grand Canyon can overwhelm that, and that’s why we’re confident.”

Rep. Raúl Grijalva's bill enacting a permanent ban on uranium mining drew praise this week from Havasupai leaders and criticism from the mining industry, as well as from a Republican member of Arizona's congressional delegation.

"Havasupai means people of the blue green water, and we have been living here for over thousands of years," Havasupai Tribal Council Member Claudius Putesoy said.

Hundreds of Havasupai live at the bottom of the Grand Canyon. They want to protect the future of their tribe and the sacred water.

Matthew Putesoy, the vice chairman of the Havasupai Tribe said native communities in northern Arizona have expressed their concerns for decades over uranium mining near their ancestral lands.

"We have a sacred duty to protect the land and the Grand Canyon from further desecration," he said.

Grijalva, the Democratic chairman of the House Natural Resources Committee, introduced the Grand Canyon Centennial Protection Act on Tuesday, the 100th anniversary of Grand Canyon National Park. The legislation would bar more than 1 million acres of land around the canyon from uranium mining.

The Arizona Mining Association was quick to condemn the bill, arguing that the call for a permanent ban is misleading and undermines the domestic supply of clean fuel sources.

"This is a disingenuous attack on the public's desire for clean energy, a healthy economy without reliance on questionable imports of these critical materials, environmental stewardship and land use autonomy," Steve Trussell, the association's executive director, said in a statement sent to Cronkite News.

Uranium is one of 35 mineral commodities deemed critical to the security and economic prosperity of the United States, according to the Department of the Interior. Uranium is abundant in and around the canyon.

Currently, a moratorium set by the Obama administration in 2012 prohibits new mining claims in the area till 2032, but Grijalva said he wants to make that ban permanent.

The history of uranium mining in the area has left a mixed legacy. Multiple inactive mines line Grand Canyon National Park. The government has investigated high radiation levels and cleaned up contamination from the century-old Orphan Mine, which is near Grand Canyon Village on the South Rim.

The Canyon Mine, 6 miles south of the rim, which is still considered active, was exempt from the 2012 moratorium. The mine's parent company, Energy Fuels, had to remove more than 1 million gallons of contaminated water from the mine site when it flooded in 2017.

The Grand Canyon Trust, a nonprofit environmental group, argues that tourism is more valuable to the local economy than mineral extraction.

"Uranium mining threatens these economic drivers while possessing little capacity to support the regional economy," it said in a recent report.

"Facts are that the risks associated with uranium mining dramatically outweigh the benefits to this region or to this nation," said Ethan Aumack, the trust's executive director.

The National Park Service reported that the more than 6 million visitors to the Grand Canyon National Park in 2017 supported 9,423 jobs and had a cumulative benefit of $938 million to the local economy.

During his visit to the Grand Canyon on Saturday, Grijalva said he expects pushback on the initiative, but he has a message for his colleagues on Capitol Hill.

"To think of the Grand Canyon not in terms of a piece of federal land that they should open up as a commodity for drilling, for mining or for extraction," Grijalva said. "They should think of it as a treasure that they need to comfort and take care of."