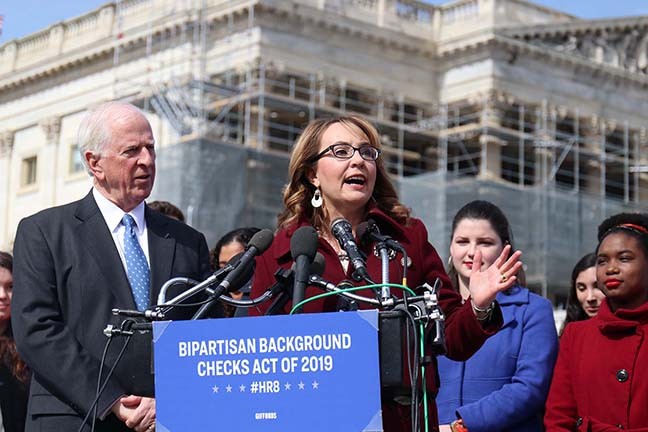 Arizona Congressional delegation voted along party lines last week as Democrats pushed one of their top priorities through the House, advancing a bill to strengthen background checks on gun transfers.

The Bipartisan Background Check Act of 2019 was just barely bipartisan, with five Republicans among the 233 co-sponsors and only eight GOP votes in the final 240-190 tally. Just two Democrats voted against the bill.

"It should have happened a while ago," Rep. Ruben Gallego, D-Phoenix, said after the vote. "Time to move forward and hope the Senate picks it up."

But the bill's chances are dim in the Senate, where Judiciary Committee Chairman Lindsey Graham, R-South Carolina, has already said he does not intend to give the bill a full hearing in his committee.

While they could not stop the bill in the House, Republicans there were able to add a last-minute amendment requiring gun sellers to notify Immigration and Customs Enforcement if an undocumented immigrant fails a background check.

Rep. Andy Biggs, R-Gilbert, said that amendment made the bill "slightly less bad," but he still voted against the final bill.

Rep. Tom O'Halleran, D-Sedona, who was one of 26 Democrats to vote for the ICE amendment, ended up voting for what he called a great bill, saying he has "been a proponent of background checks for a long time."

"I used to be a homicide detective, I've seen too much violence in America and we have to start to stem that tide," O'Halleran said.

But Rep. Ann Kirkpatrick, D-Tucson, said she was disappointed by the last-minute amendment because it "gives it some ramifications that makes it that much harder to get it through the Senate."

"It's a half-victory I guess," Kirkpatrick said. "The work's not over."

The bill, which would expand the current federal law to require background checks for any gun transfer, includes numerous exemptions for gifts and transfers of firearms between family members. Those would not need a background check.

The House rejected an exception proposed Wednesday by Rep. Debbie Lesko, R-Peoria, that would have let people in the Transportation Security Administration's Pre-Check program skip the background check process. That amendment failed on a 250-182 vote.

Lesko has blasted the overall bill this week as misguided, arguing Tuesday that it "would not have prevented any of the mass shootings in the last 20 years."

"Criminals don't get guns legally, and will not complete a background check to get their guns," she said then.

That was echoed Wednesday by Rep. Paul Gosar, R-Prescott, who said he was "not at all" in favor of the bill.

"When we can take away the application of a felon or a criminal from getting a gun, that's fine," Gosar said. "But what you're doing here is you're taking guns away from the people that can defend themselves.

"Guns don't kill—people do," he said.

The bill was lobbied heavily by former Arizona Rep. Gabrielle Giffords, a Tucson Democrat who was severely wounded in a 2011 shooting that killed six and wounded her and 12 others. Giffords was in Washington for the introduction of the bill in January and back at the Capitol Tuesday for a pre-vote rally.

Kirkpatrick said lawmakers need to keep Giffords' story in mind as they press forward on the issue.

"It's a good thing it passed," she said of Tuesday's vote, "but it just makes me think about what happened to Gabby Giffords and that makes me sad."