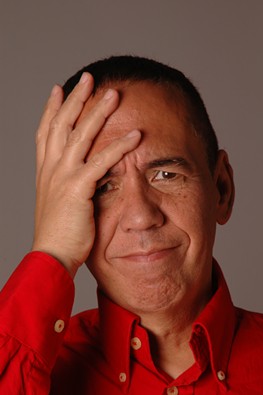 Arlene Gottfried
Gilbert Gottfried's already sold out his early show at Laffs Comedy Cafe on Wednesday, Feb. 20.
Congratulations to all involved in the first CATcomedy520 LOL Crawl. Mark your calendars for the next one, Sunday, Jan. 26 through Feb. 1, 2020. Meanwhile, follow CATcomedy520 on Facebook and CATcomedy.org on the web for Tucson comedy shows.

This month, we’re being treated to a string of top national standup comics.

Ali Wong: The Milk and Money Tour comes to the Tucson Convention Center at 7 p.m., Saturday, Feb. 16. Wong catapulted to the national scene with her 2016 Netflix feature Baby Cobra. In 2017, she drew record crowds to eight shows at the San Francisco Masonic. In 2018, she voiced and produced Netflix’s animated Tuca and Bertie, starred in a Netflix movie she co-wrote, and wrote a book coming out on Random House this year. Tickets are $37 to $63 via Ticketmaster.

Brian Regan performs at the Fox Tucson Theatre at 7 p.m., Saturday, Feb. 16. Vanity Fair is a fan, and Entertainment Weekly calls him “your favorite comedian’s favorite comedian.” In 2018 he delivered the first Netflix special of his 30-year career, tenderly named "Nunchuks and Flamethrowers." Regan is a frequent guest on The Tonight Show and appeared regularly on Letterman.Tickets are $37.50 to $74.50 via Foxtucsontheatre.ticketforce.com

Fried Chicken and Latkes with Rain Pryor features at Leo Rich Theatre at 7:30 p.m., Saturday, Feb. 16. Legendary TV producer Norman Lear is adapting for television this one-woman show created by his casting director, Rain Pryor. The daughter of comedian Richard Pryor, she is half Jewish and all entertainment.Tickets are $10 via SquareUp.com

Tucsoncomedy.com Presents Gilbert Gottfried at Laffs Comedy Caffe in two Wednesday shows, Feb. 20 at 7 p.m. and 9:30 p.m. (Update: the 7 p.m. show is sold out.) This mean, dirty and relentlessly hilarious jokester was the subject of documentary last year that let fans see his softer, more human side. No worries! The mellow Gottfried won’t be showing up at Laff’s. Gottfried’s long-time fans who may have caught his act only on TV or in arenas can enjoy the 360 degree Gottfried experience in the uniquely intimate setting of Laff’s, where even newcomers to comedy can watch the master up close. Tickets are $25 at Eventbrite.com
© 2022 Tucson Weekly