A concert of dance, music and story 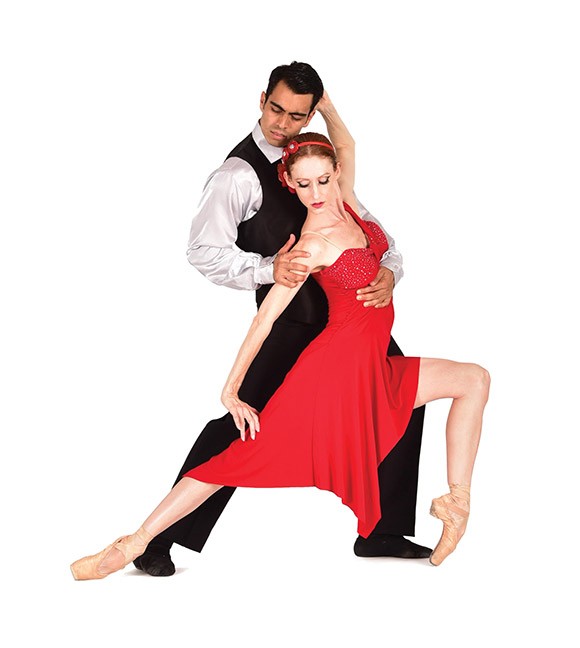 When Astor Piazzolla was a small immigrant boy living in Greenwich Village in the 1920s, he learned to love the tango music of his native Argentina by listening to records.

By the time he was 8, he was playing the music himself, on the bandoneon, the concertina-like instrument essential to tango. Legend has it that his father had found the rare instrument in a New York City pawn shop. Piazzolla went on to become not only a bandoneon virtuoso, but a renowned composer of the music of nuevo tango.

This weekend, no fewer than three local arts groups (Ballet Tucson, the Tucson Guitar Society and Rogue Theatre), joined by an opera singer and a pair of musicians brought in from Italy, will celebrate his life and music in Viva Piazzolla!

A concert of dance, song and narrative, the production is one of the final events in the seventh annual Tucson Desert Song Festival, which has brought a host of musical stars to Tucson to perform with local artists over the last three weeks.

The Piazzolla show is "a big collaboration," enthuses Mary Beth Cabana, artistic director of Ballet Tucson. The company often works with outside artists, and the festival provides that opportunity each year.

"We've done something in the Tucson Desert Song Festival every year but one," she says.

The Piazzolla show is "dance-driven and music-driven," she notes. The pro company will deploy 33 dancers to the Pima College Proscenium stage to perform original "ballet-style tango." Choreographed primarily by the company's Chieko Imada, the concert includes some 20 dances with star turns by its leading dancers.

In a dance that opens the show, the two make a striking return in a traditional tango duet, choreographed by John Dahlstrand.

"It gives them the chance to dance together again," Imada says.

The concert's live music comes through the efforts of Julia Pernet of the Tucson Guitar Society, who recruited the vocalist and musicians. She didn't have to look far to find the singer, Carlos Zapién; he lives right here in Tucson.

A successful opera and concert singer who's performed in the U.S., his native Mexico, Europe and Asia, working with such companies as Stuttgart Philharmonic and Oregon Opera, he's also director of music in Saint Augustine cathedral in downtown Tucson.

The Italian instrumentalists, the Giampaolo Bandini-Cesare Chiacchiaretta Duo, are tango musicians who are "specialists in the Piazzola repertory," Cabana says.

With Chiacchiaretta on bandoneon and Bandini on guitar, the pair have played across Europe, partnering with the likes of the Saint Petersburg Academic Philharmonic in Russia, among other orchestras. The two Italian musicians have a heritage in common with Piazzolla: his parents were Italian immigrants who had migrated to Argentina before coming to the U.S.

The two musicians play live for almost all of the dances, and occasionally they get the spotlight by playing alone on stage in between the dances.

The Rogue Theatre helped create a story line. Ballet Tucson fans will remember that the company did a different Piazzolla show, Passionately, Piazolla, for the first Song Festival in 2013. For that production, the dance troupe partnered with Chamber Music PLUS, a theater/music group, to create a music-dance drama, complete with script and actors speaking on stage.

"This is a brand-new piece. It's not the same," Cabana explains. It's about the key events of Piazzolla's life "but this is not a soup-to-nuts telling of his life."

The two founding actors of Rogue, Cynthia Meier and Joseph McGrath, worked with Cabana and Imada to frame the story. They came up with a series of brief narrative fragments that will be heard off and on throughout the show.

"They did short recorded voice-overs that give insight into Piazzolla's life," Cabana says.

The concert, divided into two acts, helps chart the evolution of Piazzolla's music through dance. Act One focuses on traditional tango, a sexualized bar dance—often featuring same-sex partners—that arose in the late 19th century in the rough ports of Buenos Aires. The dancers' costumes are redolent of those times: the men wear suits and fedoras, the woman wear long, clingy dresses.

Set to Piazzolla's innovative "new tango," Act II has the dancers doing more contemporary dance and even some balletic pieces on pointe. The costumes change too, with the dresses getting shorter and the colors getting brighter.

"It was challenging," choreographer Imada says. "I had to research tango dances in film and elsewhere. I loved doing it. It's such beautiful music."

Dahlstrand, the company's lighting designer, also pitched in. An authority on tango who has performed the dance professionally with his group, Sueños Tangos, Dahlstrand advised Imada on tango moves. He also staged a one-month workshop to teach the ballet dancers a whole new way of moving.

Dancers used to uplift and airy arabesques have delighted in tango's angular slides across the ground.

"They love it," Imada said.