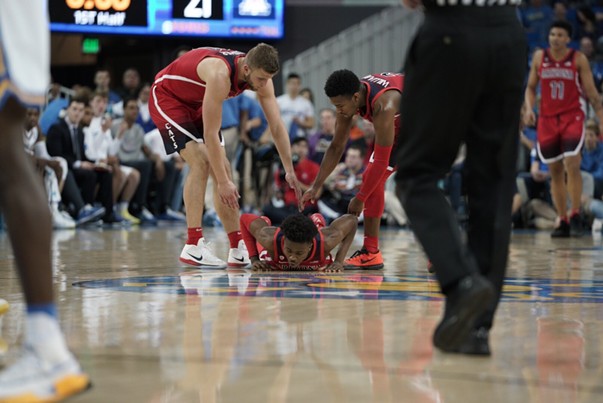 Connor Buss, Foreword Films
Arizona freshman Devonaire Doutrive gets some help up from his teammates during Arizona's 90-69 loss to UCLA on Saturday night.
The Arizona Wildcats were thumped on Saturday night by the Bruins of UCLA, thanks to a woeful shooting performance and a defensive malaise that allowed the home side to hit more than 50 percent of their shots.

The Wildcats were forced to play without Jeter once again against the Bruins, forcing Miller to play four guards against UCLA’s larger lineup.

That size disadvantage allowed the Bruins to finish the night with a resounding 47-30 edge on the glass, with freshman center Moses Brown pulling down 15 rebounds by himself.

The Bruins never relented offensively, taking a 38-25 lead into the half, before outscoring the Wildcats, 52-44 in the game’s final half of play.

An agitated Miller discussed his team’s two-game fate against the Los Angeles schools in the bowels of Pauley Pavilion on Saturday night.

The longtime Arizona coach didn’t mince words when describing his team’s play of-late, calling the Wildcats’ play against the Trojans and Bruins an offensive disaster.

“We can't make a shot,” Miller said. “You know, at times we really moved the ball. Attacked the ball by getting the ball in the middle. Dribble penetrating, but you know at the end of the day someone's got to throw that thing in and we're really struggling in that area.”

The high point of Saturday’s trouncing was the 19-point performance put up by freshman guard Brandon Williams, who led all Wildcats scoring.

Miller praised the L.A. native for his offensive prowess against his hometown team, saying he played a quality game against USC on Thursday.

That solid outing gave Williams confidence going into the Bruins game, according to Miller, which allowed him to pace the team’s offense.

“Tonight, he played a similar floor game except he made some shots as well, but he's playing the best basketball of his career,” Miller said. “It’s great to see him come back here to L.A. and really, in my mind, string two very solid games in, especially offensively.”

Both teams are coming off losses in their previous games, with the Sun Devils falling to USC, 69-67, on Saturday night.

Miller hopes to have Jeter back for Thursday’s game, saying the Wildcats’ offense is in need of the junior’s height and defensive prowess.

“We’re a much better team with Chase and I don't know the outcome of either game, but he gives us the size up front,” Miller said. “He also allows everybody to be in the role that they once were in.”
© 2022 Tucson Weekly