Tucson's only blacksmithing school is celebrating its grand opening on Saturday, Feb. 2, and the public is invited to see the sparks fly.

Desert Metal Craft, a new school started by three Tucsonans, is dedicated to "teaching the ancient art of blacksmithing together with the modern science behind the craft of metalworking." Classes range from absolute beginner to expert, and include blacksmithing, bladesmithing, art fabrication, and traditional Japanese steel-making or "tatara.”


“As far as we know, it’s the only blacksmithing school in all of the southwest,” said co-founder Pete Brown. “Some local blacksmiths do classes, but this is first to constitute a full, dedicated school.” 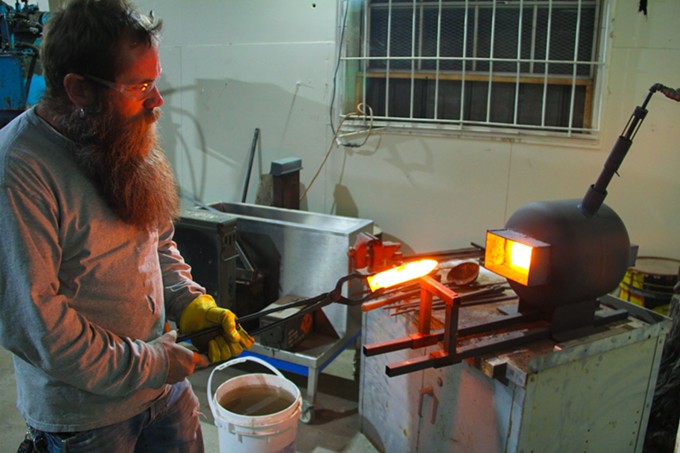 
The other Desert Metal Craft founders are Liz Cameron, who teaches applied metallurgy at Pima Community College, and Rich Greenwood, who formerly competed on the History Channel’s “Forged in Fire” blacksmithing series. The three met in blacksmithing classes at PCC.


“I just got talking with those two, and when I found out Rich wanted to start his own school, I called him up and said ‘count me in!’,” Brown said.


The three then rented a warehouse and filled it with equipment. For the all-day grand opening, they plan on blacksmithing demonstrations, music, fire dancers and more.


“The railroad runs right by, so we don’t have to worry about making too much noise,” Brown said. “Which we’re pretty excited about.”


“We’re not doing commissions, it’s very much an educational place,” Brown said. “We want it to be a kind of community school.”


While still in the school’s infancy, Desert Metal Craft’s founders are speaking with local schools to host community programs, such as summer classes for kids.


“It’s extremely rewarding,” Brown said. “You can take a piece of junk metal and forge it into whatever you want.”