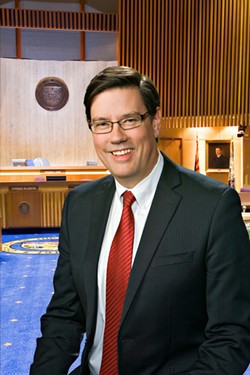 "I want to serve the city I love," Farley said.

Farley will make his opening argument tonight at the Democratic Party's Nucleus Club, which meets at 5:30 at Viscount Suites, 4855 E. Broadway.

Farley will be live-streaming his speech on his Facebook page if you can't make it to the meeting.

It's been a busy week for potential candidates who want to replace Tucson Mayor Jonathan Rothschild, who is stepping down after two terms. Yesterday, Ward 1 Councilmember Regina Romero announced she was jumping into the race.

A graphic designer whose photographic tiles grace the walls of the Broadway underpass at the eastern entrance of downtown, Farley made his first political run in 2005, when he lost a Democratic primary for the Ward 6 Tucson City Council race to former TV newscaster Nina Trasoff.

The following year, he won election to the Arizona House of Representatives. In 2012, he won a seat in the Arizona Senate, where over three terms, he rose to Senate assistant minority leader.

He also played a key role in bringing the modern streetcar to downtown Tucson through his work in developing the Regional Transportation Authority's transportation plan.
© 2022 Tucson Weekly