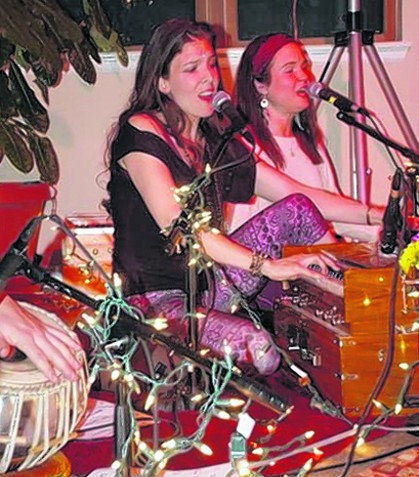 The band name tells you a lot of what you need to know: Katie Wise & Bhakti Explosion are a music outfit without borders. Fronted by singer/songwriter Katie Wise, this band sidesteps being simple folk musicians with lush, meditative infusions of Hindustani music. It's partially New Age, but Wise keeps the style grounded with positive, conscious lyrics: "Thank you almighty, for every damn thing." Certain to get you whirling in weird, worldly sonic wonder.

I listened obsessively to this album in early high school while writing a paper about Mozart. Hearing struggle, passion and pain transmuted into pure glory was like nothing else I'd ever heard. Transcendent, haunting, evocative. I felt it in my bones. That someone could think they were writing their own death mass—and create such a work of tenderness, power and beauty—to me, this is what art is capable of.

This woman is a groundbreaking artist, and a powerhouse on every level. I wouldn't be who I am without witnessing her power. Her songs were like an anthem for me during my college years. My coach once said you can't be a great artist if you're worried about what others think, you can only be decent. You have to tell people what they like, create it, and invite them in, don't ask for permission. Ani is completely self created. She has repeatedly refused to play "the game." Her label, righteous babe records, is an example of this. I also relate to her personally, as I think she and I share the quality of being courageous, but not necessarily fearless. We feel our fear, and we do it anyway.

This album for me is where the soul comes straight through a voice. When I first heard Rays voice I thought he was a woman. And then when I first saw him live, and this skinny, bearded man came out, I was stunned. His Performances are like a possession. And he managed to capture that same quality in the studio. Magic. I used to listen to this one in my tiny Venice beach apartment and sing harmony parts along with him.

Ignore the fact that one of the artists is our album producer—actually, don't. The two men on this project bring such example of mastery, devotion and individual genius the final product is breathtaking. I love the way the moods open up from one to another, like secret rooms at Meow Wolf—you never know what's going to happen next.

This man is such a complete inspiration to me. And an example of the kind of artist I want to become. He plays music directly from his heart, and from his spiritual practice, soulful singing, gentle reggae beats, and conscious lyrics. I love Trevor's songwriting because he pulls his lyrics from the deep end. And he gives a lot of his proceeds to charities, and seems to be an incredibly grounded individual to boot.

Snatam Kaur
Grace
This one I first heard on my first trip to India. I had been struggling to bring together all the feelings of confusion, watching the poverty, the power and the beauty of India, and her voice took me somewhere entirely new. Beyond all of it. I listened to the first track over and over again, while birthing my first child. I guess that's a pretty influential piece of music.

Pearl Jam
Ten
This album blew my mind. Raw powerful vocals, again transmuting some of the darker human struggles into something powerful. I got to see Pearl Jam the spring before they really "popped" at a tiny venue at the University in Boulder. Eddie Vedder, and the others in his genre, are another example of creation for the sake of creation. They created a whole new way to relate musically.

Deva Premal
Love is space
This album was given to me in my mid twenties. I was recovering from a surgery (my first and only so far) and my friend gave me this CD. I had about ten days of being homebound which was challenging for me and I was struck by the beauty and healing space her voice created for me.

Xavier Rudd & the United Nations
Nana
Xavier Rudd is such a unique artist - what other man can play multiple didgeridoos while also killing it on a drum kit – and then turn around and sing one of the most beautiful melodies while fingerpicking the guitar. Power, presence, rhythms that hit right in the gut. I also love the consciousness and High vibration of his lyrics.

Sarah McLaughlin
Fumbling towards ecstasy
There's not a lot of 'fumbling' in this album. Instead I take each song to be a voice lesson, in open vowels, in resonance, and in songwriting.

Peter Gabriel
So
Every track on this album Soars. It is almost perfect.