Who Wants To Be Tucson's Next Mayor? 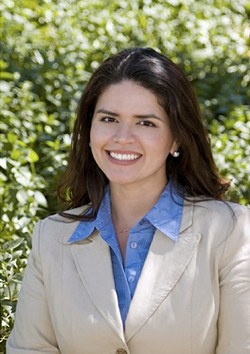 Tucson City Councilwoman Regina Romero is considering a mayoral run next year.
With Tucson Mayor Jonathan Rothschild deciding that two terms atop City Hall is enough, the rumor machine is already manufacturing the names of potential candidates for the 2019 election.

The two biggest names we’re hearing: Tucson City Councilwoman Regina Romero, who is up for reelection to her Ward 1 seat in 2019; and state Sen. Steve Farley, who is on his way out of the Legislature after an unsuccessful run in this year’s gubernatorial primary.

Both Romero and Farley told The Range today that they are giving the race some serious thoughts but aren’t likely to make final decisions until after the holidays.

Ward 2 Councilman Paul Cunningham, who is up for reelection next year, tells the Range he hasn’t decided whether to run for mayor and will spend the holidays talking it over with his family. “I can say without question I will be running for office in 2019,” Cunningham told The Range. “I cannot specify on whether it will be for Ward 2 or mayor at this time.”

Ward 6 Councilman Steve Kozachik has already told the press he’s not going to run. In a prepared statement, Kozachik said he’d have to resign from his Ward 6 seat to run for mayor; since he’s shepherding several major projects—including the upcoming Broadway widening and the redevelopment of the Benedictine Monastery property on Country Club Road—he doesn’t want to step away from the table.

We also hear that developer Randi Dorman has expressed interest in the job. She tells The Range that she's been encouraged to run in the past and she "would love to serve the city that way" but she's waiting to see whether Romero decides to get into the race.

We’re sure some political gadflies will be exploring runs as well as well. (We’re looking your way, Felicia Chew.)

Democrats still have a huge voter-registration advantage in the city of Tucson and GOP candidates got clobbered across the board in Pima County in this year’s election, so it’s gonna be an uphill battle for any GOP candidate who steps into the ring.
© 2022 Tucson Weekly