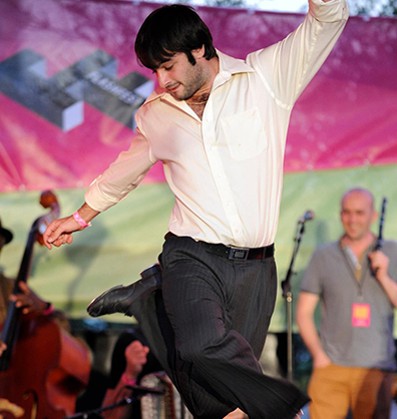 And in Tucson, if it's Christmas time, that means the rollicking crew performing Irish Christmas in America is on its way.

The team of Irish musicians, singers and dancers were in freezing Michigan last week, but this Saturday night they'll be in slightly warmer Tucson, a town they visit almost as regularly as Santa does.

"We first did the Irish Christmas show in Tucson in 2005 with (the band) Teáda at the Rialto," group founder Oisín Mac Diarmada reported from the Grand Rapids airport between shivers. "We've come every couple of years since."

Last year, the award-winning performers brought their holiday cheer to the Fox Tucson Theatre, but this year they'll alight in the more intimate auditorium at The Gregory School. Aided by the local dancers of Tucson's Celtic Steps, the seven traveling artists will bring musical and dance traditions from all over Ireland.

The loquacious MacDiarmada, who handles most of the story-telling and banter on-stage, is a virtuoso fiddler from County Sligo. Another wit, resident elder Séamus Begley, hales from a musical family in the Irish-speaking Gaeltacht in West Kerry. An accordion player and vocalist, Begley is also famed for his haunting sean-nós singing in the old style.

A young singer new to the band last year, Niamh Farrell of County Sligo, is a counterpart to Begley. She sings old tunes, including some in Irish, but she also has a penchant for pop.

"She mixes up contemporary and traditional," MacDiarmada says.

County Mayo's Gráinne Hambly plays Irish harp and concertina, and Detroit-bred Sean Gavin, son of a fiddler from Clare, handles the flute and uilleann pipes, the Irish version of bagpipes.

The two dancers, American-born Samantha Harvey and Brian Cunningham, a band newcomer out of Connemara, both play instruments—piano for Harvey and bodhrán (Irish drum) for Cunningham, now resident in Green Bay.

Both do old-style step-dancing moves. The traditional dancing, MacDiarmada explains, is "looser and less organized" than the precise styles required in the many Irish dance competitions.

"Competition-style dance is very strict," he says. "In performance, you're free."

Which could explain why Cunningham sometimes dances with brooms—and flies high into the air.

The band will perform numbers from their new album, Last Night in Chicago, which includes new tunes and such old carols as "The First Noel." Celebrating the Irish take on Christmas, the show always includes a lovely Irish rendition of "Holy Night"—"Oiche Naofa" in Ireland—followed by an English singalong of the beloved carol.

How distinctive is the Irish Christmas nowadays, when cultural practices are shared around the world?

"It's a mix of shared experiences and particularly Irish things," MacDiarmada says, but some pre-internet, pre-television and even pre-radio practices survive. "The strongest tradition is the wren boys—it goes back to pagan times."

On Wren Day, the day after Christmas, boys used to hunt a wren, once considered a kingly bird. Nowadays, girls and boys alike, and even adults dress in costumes, carry a homemade wren door to door, and sing or dance at each house.

But some Wren festivities are bigger. In Dingle, the west coast town known as the last parish before America, an organized Wren parade marches through the straits, town, MacDiarmada says.

Christmas Day remains a religious day for many in Ireland, quietly celebrated at home with family, but the pagan Wren celebrations the next day "get people out of their houses, into the streets and into the pubs."

With the loss of community in the modern world, he notes, "people are keen to preserve social bonds and links to communities."

The modern world has also spawned a new Irish Christmas tradition, he adds. Thousands of emigrants, traveling from the U.S., from Canada, from Australia, flood the airports of Ireland every December. Unlike Irish exiles of old, in the age of cheap flights these migrants can and do return to their families.

And after 28 shows in four weeks in America, the band members will be keen to reconnect with Ireland as well.

Will they go home?

"We sure will," MacDiarmada declares, "home for Christmas."