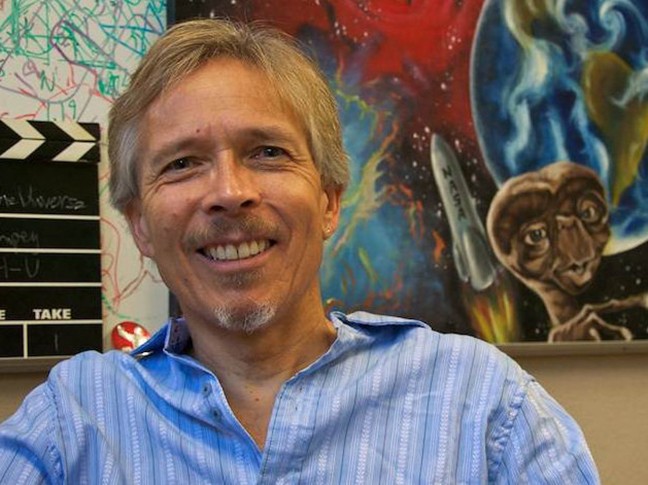 Chris Impey is a Distinguished Professor of Astronomy and Associate Dean of the College of Science at the University of Arizona. He's written multiple books on space, time, the cosmos and everything those entail. So, why is he just now writing a book about black holes, the most extreme objects in the universe? Well, in his words:

"Sometimes you're in a field of work and don't step back and really examine it," Impey said. "I've probably had this book lurking in the back of my head for a while, and I realized that it was about time to write it."

Impey's newest book, "Einstein's Monsters," shows that the reality of black holes are just as far-out as anything science fiction has been able to come up with. Impey examined other science books, and realized they mostly covered the topics of "normal" black holes.

"Nature makes a phenomenal range of black holes," Impey said. "And I realized there's a book there, to examine all those sizes."

In "Einstein's Monsters," Impey introduces the general public to the intricacies of black holes, both large and small. Although the mathematics and physics behind black holes are incredibly complex, Impey uses a career of knowledge to explain them simply, via metaphor and analogy.

"I call them 'Einstein's Monsters' as a metaphor." Impey wrote in the book's foreword. "They are powerful and beyond anyone's control. Einstein did not create black holes, but he developed the best theory of gravity that we have for understanding them. What most people think they know about black holes is wrong."

Although it may sound sacrilegious coming from a scientist, Impey maintains Einstein was incorrect about certain things, leading to black holes to truly becoming his "monsters."

"Einstein didn't believe that black holes were physically real," Impey said. "He thought that there must be something wrong about his theories. Einstein himself admitted that he was not the best mathematician in the realm of astrophysics."

But, luckily for the casual reader, an astrophysics degree isn't a prerequisite to enjoing the book. In his role as a distinguished professor, Impey teaches non-science majors as a daily job, and delivers dozens of talks annually to groups of various backgrounds. In addition to understanding complex concepts, Impey can also relate simple and fascinating astrophysical trivia.

"Most black holes in the universe are so massive, you could survive falling through them." Impey said. "The stretching you'd feel from falling through would probably only feel like indigestion. You would survive, but couldn't get back to tell everyone all the cool things that you saw."

The book's first half examines evidence for black holes, both large and small. The most recent evidence for them came in September 2015, when the Laser Interferometer Gravitational-Wave Observatory first observed gravitational waves. This matched the predictions of general relativity, proving Einstein's theory from nearly a century prior.

"When gravity waves were detected for the first time, I knew I had an end piece for my book," Impey said. "It removed any doubt for black holes."

The book's second half discusses the lives and deaths of black holes, and what phenomena mean for the universe. The book also details many of the theoretical problems brought up by black holes scientists still struggle to answer.

"From a scientific standpoint, there are some true paradoxes." Impey said. "These problems attract so much attention, yet are still unresolved."

Other problems discussed include why are most black holes so dark, despite the fact they consume so much matter, and of course, the age-old question: What came first, the galaxy or the black hole?