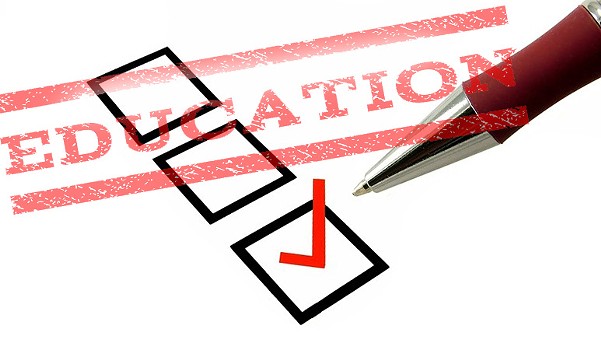 It turned out to be a Democratic wave election, even if it didn't look that way the night of Nov. 6. It wasn't the tsunami some of us hoped for. It wasn't even a Waimea Bay wave with Democrats riding the barrel while the crest of the wave crashed down on Republicans' heads. It was one of those Southern California waves immortalized by the Beach Boys, a breaker just big enough to surf, then grab your board and strut over to talk with your friends about the ride.

It was a good wave, but not a great wave. Still, it beat hell out of being dragged out to sea in a Trump undertow.

How did education fare in the election? Again, it wasn't a major pro-education wave, but it was a wave nonetheless. It depends if you're a "wave half empty" or "wave half full" kind of educator, whether you're disappointed or pleased.

A good year for Democrats is a good year for the future of public education, period. But let's break the education picture down to the local, state and national levels.

The big local news is another one of those power shifts for the TUSD board. The voters clearly didn't want Michael Hicks on the board for another term. By his own admission, Hicks didn't much want Hicks on the board either. His seat went to top vote getter, Leila Counts, and Adelita Grijalva held onto her seat. Those two and Kristel Foster share similar educational values, so they're likely to vote together on most issues, a significant change from the Hicks, Mark Stegeman and Rachel Sedgwick majority. Counts brings experience in counseling and special education with her, which will add a valuable perspective to the board's discussions and decisions.

The Ducey/Garcia race looks like it was a repudiation of education as a major election issue, but that conclusion requires some context. Garcia wanted to make the election about education, but he never got the chance. Ducey did a nice job of positioning himself as a champion of public school funding, taking the air out of one of Garcia's major talking points. Also, the Ducey campaign was rolling in dough while Garcia ran his campaign on a shoestring. By outspending Garcia 50-to-1 on television advertising, Ducey was able to turn Garcia into an angry Mexican who wants to let all his Mexican friends and neighbors pour across the border. Garcia had no effective way to refute the charge, let alone promote his education-centered campaign proposals.

The Superintendent of Public Instruction race, on the other hand, was a clear win for public, school-district-based education. It was a race between two unknowns, and the Democrat, Kathy Hoffman, won a clear victory over Republican Frank Riggs, making her the first Democrat to occupy that position since 1995. Hoffman's mindset will focus on school district schools, special education and ELL, though not exclusively, of course. Riggs would have seen his job through a charter school lens.

The Ed Supe job doesn't bring a lot of power with it, and Hoffman is likely to be frustrated by the agenda of Governor Ducey and the State Board of Education he appoints, but better to have someone who will do battle with the forces of privatization/"education reform" than someone who supports it.

The defeat of Proposition 305 is a big deal. It stopped the expansion of Empowerment Scholarship Accounts (aka Education Savings Accounts, aka Vouchers on Steroids) which was passed by the Republican-led legislature and signed by our pro-voucher governor. The defeat is a good thing, but not surprising. Unless I've missed a vote somewhere, every statewide referendum on vouchers has voted them down, everywhere across the country. The public doesn't like vouchers nearly as much as conservative politicians and their rich supporters.

A few other factors could make for a somewhat better educational environment in Arizona. Ducey promised to pass more funding for teacher salary increases, and he's come out in favor of charter school regulation to help eliminate the corruption and profiteering running rampant in some charters, as have some Republican legislators. If Ducey is true to his word — which we shouldn't assume in the first few years of his second term — school funding and charter school regulation will improve.

Meanwhile in the state House, Republicans have a razor-thin 31-29 majority, putting Democrats in a good bargaining position. If the Dems hold together, it will only take one Republican joining with them to kill a bill. That means Democrats may have opportunities to play "Let's Make a Deal" on education-related legislation.

In  their first two years, Trump and his Secretary of Education Betsy DeVos haven't been successful in cutting education funding or moving it from public schools to vouchers, though they're tried. Now that the Democrats have a majority in the House, any further attempts to cut budgets or privatize education should meet with stiff resistance.

Across the country, lots of educators ran for office, though not many were successful. That may be a defeat in the short term, but if educators continue to run, more of them will win. Even when they don't, their presence makes education a more important campaign issue.

Small, hopeful signs, both for small-D democracy and for education. But we live in strange, uncertain times. It's hard to know what any of it will mean a week from now, let alone over the next few years.
© 2022 Tucson Weekly