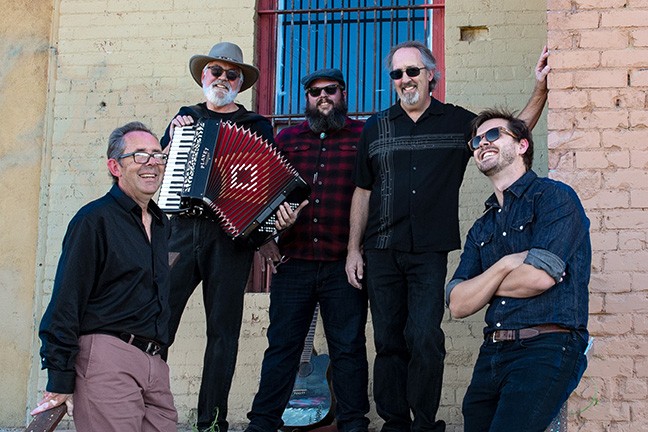 The Carnivaleros: Equally capable of foot-stomping yip yaws as eloquently unfolding melancholia, Tucson's overlooked Carnivaleros are more than some beer-bong band. Since 2003, this neo-folk/bluegrass outfit with Zydeco mestizo roots has been hitting bars, courts and patios all over Southern Arizona. Songwriter Gary Mackender leads the band with soulful, often pithy tales of bad luck and busted love, which turn plaintive and sincere on a dime, replete with romantic yearning solos. The rest of the dudes (and chicks who sit in) coalesce in a chemistry and range akin to Grisman and Garcia's Old and in the Way. On songs like "Party Girls," the band's tight harmonies are second only to the seamless featured-playing handoffs between all six players in just more than minutes; an impressive, subtly rendered musical feat. A boisterous, gentle and accomplished band. Friday, Oct. 12, at Johnny Gibson's Downtown Market, 11 South Sixth. 6 p.m. All ages. —B.S. Elliot

John Paul White plays what some might call understated Southern Gothic folk. When not dueting with the mighty and understated Civil Wars, this native Alabaman underscores his mournful baritone with solo acoustic guitar. On his newest solo record, Beulah, White sings simple songs of loneliness and alienation. The melancholy words, "No one will ever miss me," are emphasized by sparse guitar which restrains as much as delivers, offering a tension across which White's sorrow is never allowed to fully peak or soar. Jeff Buckley minus the catharsis, or Thom Yorke without that high lonesome wail. By keeping tunes subtle, almost lo-fi, White traps the listener at the bottom of the emotional barrel with him—no hope or escape in sight. Yet darkness never fully surrenders to despair—perhaps it is the slight southern drawl that reassures he has been there before and will continue to try, heartbreak and all, to explore his humanity. With Amy LaVere and Will Sexton. Saturday, Oct. 13. Club Congress, 311 E. Congress. Doors at 7 p.m. $18-$20, 21+. —B.S. Elliot

Yung Heazy (aka Jordan Heaney) is a Canadian bedroom pop millennial of sorts. With sweet Beatle-y hooks (mid-to-late period), an earnest heaping of self-reflection ("It doesn't seem to matter/It always seems to find me, heroine") and sunny post-Sea and Cake guitar duets to harmonize with his own lead and backing vocals, Heaney pens accessible tunes likely to be overlooked, like old Van Duren back in the day. (Look him up!) On Heazy's last record, Whenever You're Around I Hate Everything Less, he deduces that love is all you need. (Yes, like he's the first to discover that, and innocently push it forward. The innocence is addictive.) Written, performed and recorded alone, but touring with three dudes live, Heaney isn't letting anything—geography, obscurity or limited resources—stand in his way, playing houses, public parks, sidewalks or anywhere with electricity. Beyond the goofed-up hipster persona, his hushed moments of bittersweet candor are present, and sincere. Sunday, Oct. 14. Roach Ranch, 268 E. Jacinto Street. 8 p.m. $10. All ages. —B.S. Elliot

DJ Dan: DJ Dan's been creating electro house music for 28 years—since it's very inception. (Feel old yet?) He's remixed Gaga and Tribe Called Quest and he came up in Seattle, L.A. and San Fran at all the right times. OG with EDM staples like "Loose Caboose" and "That Zipper Track," he is internationally renowned. But Dan is much more than his resume: a master of evocative, progressive emotional states, across drums machines and canned vocals and mashed-up older hits. Somehow his music is both endlessly danceable and viscerally moving. This intangible is what other DJs sorely miss—the ability to channel the original intent of an artist and, through sped up, cut up, bass-heavy additions, somehow arrive at a new, heightened or deepened place. Dan's synthesis of all things house that have come before, and continued relevance in the present and future lends hope and history to a fleeting and ever-evolving art form. Saturday, Oct. 13. 191 Toole. 9 p.m. $10-$20. 21+. —B.S. Elliot