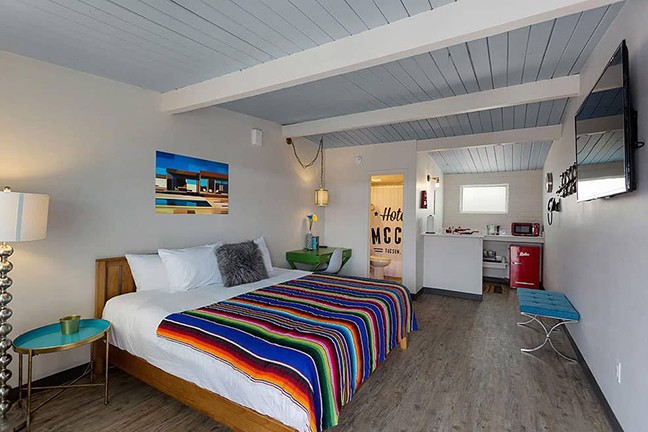 Courtesy
Part gallery, all hotel: The Hotel McCoy is opening its doors this weekend.

With murals, open-mics and agave-infused breweries on nearly every street corner downtown, it can often seem you're walking right through the middle of Tucson's essence. But Hotel McCoy is taking it a step further. The upcoming "art hotel" on Tucson's west side hopes to allow patrons to spend a night in the very heart of the Old Pueblo's culture.

Hotel McCoy, 720 W. Silverlake Road, is hosting its grand opening on Saturday, Oct. 13. The doors will open for the public to enjoy not only a hotel filled with local art, but also a kind of artists' hub, music venue and more.

Nicole Dahl, creative director and general manager of Hotel McCoy, wasn't born in Tucson, but she still considers it the place she grew up. She went to the University of Arizona, fell in love with the city and worked at local mainstays for many years.

"I credit a lot of what I learned from my time working at Hotel Congress." Dahl said.

After graduating, Dahl worked as a creative consultant for hotels, finally opting to start her own, and designing it exactly how she wanted to. Dahl found she was often forced to choose between one of three options when looking for a hotel: a place with nice amenities but is too expensive, an affordable place without many amenities, or a place in the middle that doesn't really achieve either. Her dream of a Goldilocks hotel seems to be coming to fruition with McCoy.

Maintaining the original '60s aesthetic, the 93-room hotel boasts it has "Vintage Vibes. Modern Perks." After nearly two years of developing and remodeling at the rundown Silverbell Inn, Hotel McCoy rises from the ashes with a sauna, firepit, pool and heaps of local art.

Both murals and photographs adorn the walls of the Hotel. One local photographer, Tony Aragon, has a collection of 15 pictures in the lobby mixed in with several other local artists.

"To have that many different artists all come together for one big project is really cool," Aragon said. "They've done a really good job cleaning the place up and making it look welcoming. Being in the lobby isn't like being in a regular hotel, it's a place you just want to hang out in."

Aragon's photography depicts all things naturalistic and Tucson: Monsoons, deserts, sunsets and saguaros. And it's all for sale. Sticking with a commitment to local artists, all profit from art sold in the Hotel lobby will go back to the original creators.

"Hotel McCoy says they're all about Tucson and giving back to the artists," Aragon said. "And from what I've seen, that couldn't be more true."

Even the bedrooms themselves are filled with art; local artists working with Hotel McCoy can "adopt" rooms and design the interiors, so every room has its own unique (but still local) feel.

"Everywhere we could, we placed local art." Dahl said.

Located just west of the I-10, on the southern slopes of A-Mountain, Dahl's friends were originally unsure if the location would work, fearing it too far from downtown. But Dahl tried the neighborhood's convenience out. Ubering from McCoy to downtown (about two miles) only cost her $5 or $6 each trip.

Named after a "little known and little traveled AZ mountain range," Hotel McCoy already got its start as a part of Tucson's culture and business by serving as a venue for the recent HoCo Fest. With a fair amount of open space, McCoy was able to provide room for an outside dance floor.

In keeping with Tucson trends and culture, Hotel McCoy is also being as environmentally-sound as possible (without removing air conditioning). McCoy will use eco-friendly cleaning products, low-flow water fixtures, LED lighting and is doing away with those plastic mini-shampoo bottles found in hotels.

"In today's world, you have to be conscientious of the environment," Dahl said. "So we started with sustainability in mind."

Although the hotel isn't officially open, there are several plans for recurring events. Hotel McCoy has an outdoor theatre for movie screenings, and Dahl also plans to have a songwriter night with live music.

Hotel McCoy's grand opening party is slated to have local musicians performing, room tours and live mural paintings, as well as local food and drinks. While there isn't a commercial kitchen on property, Dahl is working with the close by American Eats Co. to organize food deliveries. On top of this, the beer will be from local breweries, the coffee will come from Tucson, and the wine will be from Arizona vineyards.

"I'm all about collaboration," Dahl said. "I feel it's very Tucson."