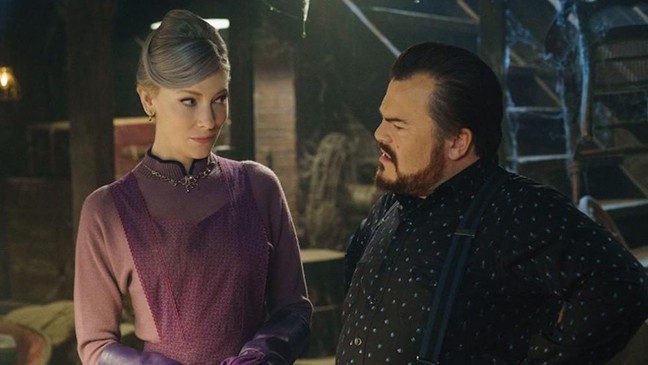 The House with a Clock in Its Walls feels like a mishmash of many kid-friendly Halloween tales, and a messy mishmash at that. It wants to be Harry Potter, Lemony Snicket and Goosebumps all rolled up into one wacky movie. It's all a little too much, and it falls apart in its final act.

Granted, it's based upon a novel published in 1973, so really, the entities mentioned above maybe got inspired by author John Bellairs and his ways of spooking kids with words on paper. As for the cinematic punch, Bellairs and his tome were beaten to it, and this movie adaptation pulls a lot of style choices from films that came before it.

While Jack Black and Cate Blanchett deliver fun performances as a warlock and semi-retired witch, much of the film rests upon the young shoulders of Owen Vaccaro as Lewis, an orphan sent to live with his uncle Jonathan (Black) in a creepy house. Jonathan and his neighbor Mrs. Zimmermann (Blanchett) eventually start coaching the misfit Lewis in the powers of witchcraft, an offense that would get child services on their asses, even back in the '50s when this film is set.

Vaccaro looks like he's a capable actor and, for much of the film, he's good and quirky. But there are moments where he's called upon to really emote and some of those moments go way over the top. Keep in mind that Roth hasn't worked much with kids in his career (although one must give props for the action he got from the cool karate kicking kid in Cabin Fever). You get the sense that a guy who has worked more with kids might've found a way to pull Vaccaro back a bit and let him shine in an understated way rather than trying to be too grandiose.

Black delivers a quintessential Black performance, manic glee spiced with warm smiles and occasional glimpses of his rage. It's like Black performances before it, but that's not necessarily a bad thing, and I did like the whistling ode to Tenacious D. Blanchett does admirable work too, although her character is a bit underdeveloped.

Kyle MacLachlan costars as a magician responsible for putting a powerful clock in the walls of Jonathan's house, a clock that could contribute to the apocalypse. MacLachlan doesn't get a lot of screen time, and much of it is under heavy makeup, but he does well in his shots. There's an evil underbelly involving his character (and an encounter in the woods that pushes the PG rating because it is legitimately freaky) that had me wishing more of the movie was about him. There's actually a terrifyingly dark and intriguing movie to be made based on what his character went through in his backstory, which is mostly glossed over.

Maybe the theater I attended was cheaping out, but much of the film looks dark and under lit in a bad way. While some of the many visual effects are good looking, including animated stained glass, some of the practical effects are a little too goofy to gain scares.

Black and company occasionally make the movie watchable, even enjoyable at times. Things go flat in the second half, and you'll find yourself checking the clock on your wrist more than worrying about any clock in the wall.