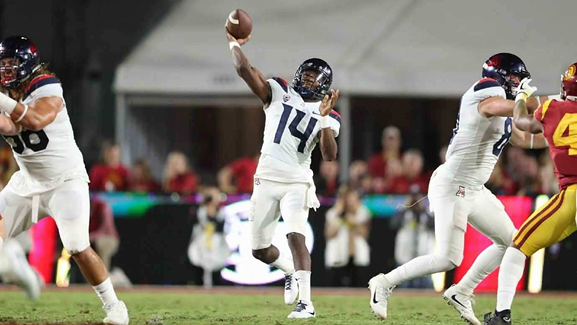 Stan Liu | Arizona Athletics
Arizona sophomore quarterback Khalil Tate goes deep with a pass against USC during the Wildcats 49-35 loss in 2017.
Welcome to the fourth week of the college football season, with the treat of watching our desert-dwelling Wildcats battle it out in the rainy city of Corvallis, Oregon.

The hometown Arizona Wildcats and Oregon State Beavers meet at 1 p.m. PDT Saturday in a battle of two of the Pac-12's bottom men on the totem pole. The dueling ball clubs enter this week's contest with one each win to their name, with wins over Southern Utah for their lone victory.

The Wildcats slugged the Thunderbirds last week, 62-31, thanks to a career-high 349 passing yards from junior QB Khalil Tate.

Tate's passing acumen covered up the Wildcats sorry defensive effort, giving up 31 points and 463 offensive yards to a Football Championship Subdivision squad many had never heard of.

Arizona managed to right some of their early season rushing woes last week, gaining a year-high 268 yards on 38 carries.

That lofty number covers up the fact that the Wildcats have not had a player break the 100-yard rushing plateau in three games, a year after racking up more than 4,000 yards as a team on the ground.

Sophomore back Gary Brightwell had arguably his best outing as a college player last week, with a team-high 81 yards on 9 carries.

Senior receivers Tony Ellison and Shun Brown showed their pass-catching abilities, with Ellison grabbing 4 catches for a game-high 111 yards and a touchdown, while Brown had 5 receptions, 97 yards and two touchdowns.

Tate and his band of merry men will face the conference's worst defense statistically, with the Beavers surrendering 46.3 points per game and 522 yards per game, both ranking 12th in the Conference of Champions.

It'll be interesting to see how the Wildcats fare in the Willamette Valley, where they lost by 25 the last time they played in 2016.

Who to Watch: Keep an eye on OSU sophomore QB Conor Blount, who will reportedly make the start for the Beavers. Blount has completed 63.9 percent of his passes this season for 570 yards and four touchdowns. Freshman running back Jermar Jefferson is another young Beaver to keep an eye on, as he leads the squad in rushing yards (391) and touchdowns (6). Jefferson has rushed for 238 and 106 yards in his last two games, against Southern Utah and Nevada, with six rushing scores in those games.

How to Bet: Vegas currently has Arizona as a 5.5-point favorite, as of Thursday morning. The over/under on Saturday's game is 75.5 points.

Who Will Win: The Wildcats are 2-4 against the Beavers since 2010, having beaten them 49-28 last fall in Tucson. I expect Arizona to win on Saturday, 31-28, with a late Lucas Havrisik field goal sealing the victory for the Wildcats.
© 2022 Tucson Weekly