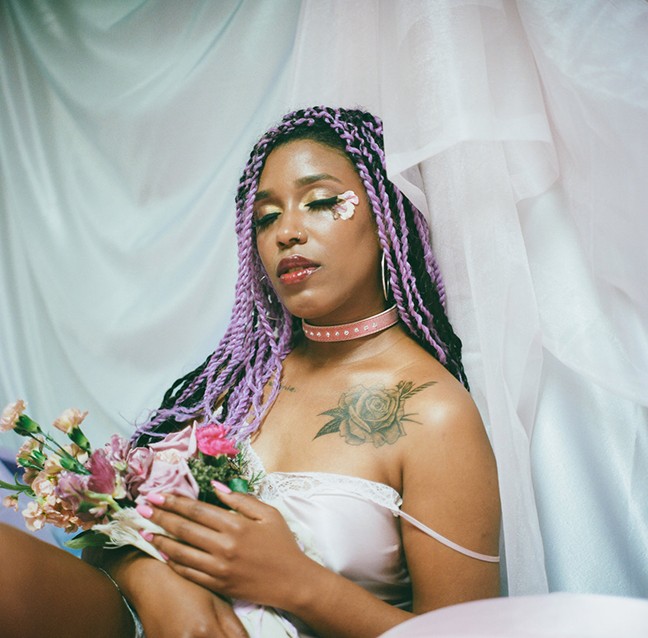 Mhysa is more than just another angry black woman. "I'm not giving up my rage/But I need joy so much more." An established sound and performance artist with Philadelphia's SCRAAATCH, Mhysa's solo effort, Fantasii, honors Black history, is influenced by femme empowerment, and twinkles with spiritual transcendence. Working from her rich Philadelphia roots, Mhysa samples her grandfather's blues and blankets them in a shimmering layer of synth and chimes in "Glory Be Black." Later, she summons the sexual musicality of heroes Donna Summers and Janet Jackson in the strip-club banger "Strobe." Working within the EDM idiom, Mhysa weaves and samples disco, R&B, rap, ambient and techno influences together, creating a language of inter-textuality across decades of dance club floors. This is substantial and important black music, soulful and ethereal at once, created by a woman who has survived struggle to arrive at a well-earned higher place. Thursday, Aug. 30, HOCO Fest, Hotel Congress, 311 E. Congress. $20. 16+. hocofest.com. —B.S. Eliot

Mexican Institute of Sound. Political, whip smart, ironic. Any one of these three adjectives is hard to pull off with pure musicality, but Mexico City's Mexican Institute of Sound ganó the triple crown. Whether directly addressing the problems in "Mexico," where violence and corruption has citizens "saber que el tuyo no es tuyo," (knowing what is yours is not yours) or playing against Latin-lover stereotypes, "Escribeme Pronto. Soy pasionante, pero yo no soy tanto" (Write me soon. I am passionate but I am not stupid), the sing-along/rapped lyrics are always on point—witty and aware of U.S. and Mexican cultural shortcomings. But it's not just the lyrics in this post-Beck hip-hop outfit that succeed. On "Mexico," traditional, heroic-sounding horns are slowed down to be clownish; turning a cultural touchstone on its head. This is parody at its finest—razor sharp, danceable, fun. Like Ozomatli, this banda just gets better live. All hail group leader Camilo Lara! Not to be missed. Friday, Sept. 1, HOCO Fest, Hotel Congress, 311 E. Congress. $20. 16+. hocofest.com. —B.S. Eliot

Orkesta Mendoza may be the perfect frontera band. Sergio Mendoza and his five badass multi-instrumentalists perform a strident mix of Latin genres, including cumbia, mambo and ranchera, combined with persona blanca indie, psych and straight-up rockandrolla. The result is dust-kicking celebration of life, in English and Spanish, where primal Latin rhythms mix with Yankee slide guitars, cajon keeping ritmo for beautiful soaring horns. Cuban, Mexican and Arizona sounds artfully woven together in a buen bien mezcla—these gents always don their finest, be it fetching Blues Brothers suits, Guayaberas or Folklorico chaquetas. Equally at home with all the countries and customs they represent, Orkesta Mendoza have been known to bring the walls down. Friday, Sept. 1, HOCO Fest, Hotel Congress, 311 E. Congress. $20. 16+. hocofest.com. —B.S. Eliot 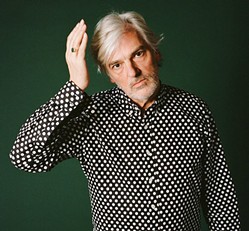 Robyn Hitchcock. This onetime Tucsonan has made a miraculous career of being himself, born of penning smart pop about emotional grey areas. Well into his fourth songwriterly decade, Hitchcock's psych-folk singsong—with The Soft Boys, the Egyptians, Venus 3 and solo—has long enjoyed blowjobian critical accolades, but his romantic, surreal and atheist musings have guaranteed nothing more than worldwide cult following. In a Hitchcock love song "nothing lasts forever, but I love her anyway." He long-ago mastered the empathic ballad for outcasts (listen again to "Queen Elvis") and tunes that willfully embrace surrealism to escape modern life ("I often dream of trains when I'm alone/I ride them into another zone...heading for paradise.") For Hitchcock, the only things that really matter are the connections between people and the fruits of one's own imagination. Ideas that couldn't be driven inward better than with his sweet Syd Barrett-meets-George Harrison vocals, fitful, percussive guitar and harmonica. The London-born Hitchcock is as quirksome and vibrantly authentic as the Old Pueblo itself. Saturday, Sept. 1, HOCO Fest, Hotel Congress, 311 E. Congress. $20. 16+. hocofest.com. —B.S. Eliot