Poetry Both Passionate and Political 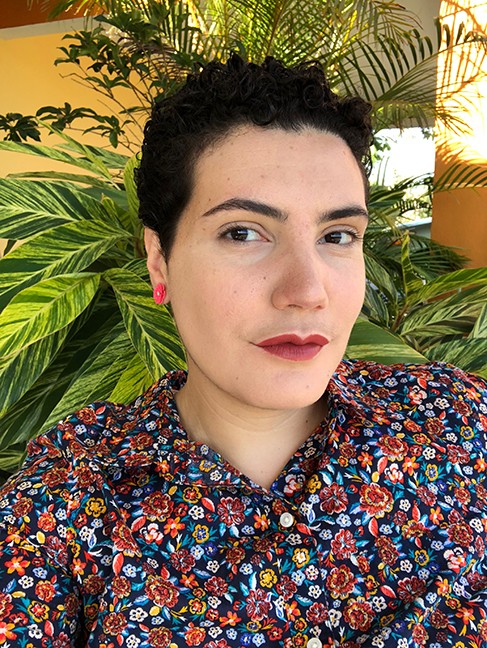 Philadelphia, says poet Raquel Salas Rivera, is "a city of people who've been here all their lives."

But it's also a city of immigrants, teeming with Puerto Ricans, Koreans, Mexicans, Chinese. So when the bilingual, Puerto Rican-born Philadelphia transplant applied to become the city's fourth Poet Laureate, Salas Rivera proposed a project that would celebrate these newer Philadelphians.

Salas Rivera, who will give a reading in Tucson this Saturday, along with local poet Sophia Terazawa, won the two-year post.

"I like Philly," says Salas Rivera, who moved there for grad school at the University of Pennsylvania. "It's very welcoming."

As a queer, non-binary person who transitioned three years ago (and prefers the pronouns "they" and "them"), Salas Rivera also appreciates the city's "big queer community." And it doesn't hurt that "absolutely there are many poets" in the City of Brotherly Love.

The much-published author of four books of poetry and six chapbooks, and editor of several journals, Salas Rivera has spent the summer organizing outdoor readings in a poetry festival that reached neighborhoods across the city.

"The project is called 'We (Too) Are Philly,'" Salas Rivera says by phone from their adopted hometown. The title comes from a line "in the poem "I, Too," by the African-American poet Langston Hughes, who declares that as a "darker brother...I, too, am America."

The new poet laureate enlisted teams of local poets to read from their own work at each of the six readings, taking care that at least one poet at each location spoke and wrote in a language other than English.

The sites were "intentionally chosen," Salas Rivera says, and each evening of readings was organized around a theme related to "place, space and community." The final event, in early August, was scheduled to take place in a park in North Philadelphia, a poor African American and immigrant neighborhood "being rapidly gentrified." But when rain began to fall, Galaei, a queer Latinx social justice organization across the street from the park, welcomed the crowds inside.

The evening's poetry revolved around gentrification and the displacement of long-time residents. The audience was rapt.

"People sat on the floor," Salas Rivera says. "It was packed. People were saying, 'I've never been to a reading like that before,'" one that spoke to their real-life concerns.

Salas Rivera's own poems "draw strongly from the Latin American lyrical tradition," the poet says. The works are "rooted in my own experiences" and "capture the experience of being in Puerto Rico and living in Puerto Rico." While much of the material is intensely personal, the poems don't shy away from political critique.

Salas Rivera's third book of poems, tierra intermitente (intermittent land), laments what the poet considers the colonial status of Puerto Rico, focusing on the so-called Promesa Bill, an Obama-era financial initiative that gave an outside "control board power over the (Puerto Rican) government." Under the bill's dictates, funds for hospitals and schools have been slashed, and the minimum wage for young workers has been lowered.

"Puerto Rico has become more impoverished," the poet says. "It led to the destruction of the place I call home."

The book ends with a poem about Hurricane Maria, the devastating storm that swept the island in 2017. An early official account put the number of deaths at a "ludicrous" 64, Salas Rivera recounts; recent studies estimate that the death toll was in the thousands. Salas Rivera's next book, lo terciario/the tertiary to be published this year, will zero in on the hurricane and the anemic response to the disaster from the United States.

Born in Puerto Rico, Salas Rivera was brought to the mainland U.S. as a baby when their parents went to grad school; the family lived in the U.S. until young Raquel was 14 years old. Both parents were linguists who took care that their child grew up fluent in both Spanish and English, and Raquel ultimately studied at the University of Puerto Rico at Mayagüez.

But when Salas Rivera began writing at 12, the budding poet wrote only in English, and continued to do so for a time even after returning to Puerto Rico.

"It was very difficult for me to let go and to immerse myself in Spanish," but eventually that first language called to the poet. Their first book, Caneca de anhelos turbios (flask of turbid desires), published by a "queer Puerto Rican press," is in Spanish. The return to Spanish was a significant "shift from one thing to another," Salas Rivera says, a transition that paralleled the physical and identity migrations in the author's life. Once immersed in that native tongue, the poet found it difficult to translate the work into English.

"When I first came to Philadelphia, I didn't do any readings. I was trying to figure out where I fit in. When I got invited to read, I asked myself, 'What am I going to do? My works are in Spanish.'"

Finally the poet decided that it was important to read the poem in Spanish, making "folks uncomfortable at a reading for a few minutes," before following up with an English translation. "It's a political act" to have the audience of English speakers listen to a language they don't understand, Salas Rivera says. Their discomfort mirrors, at least briefly, the everyday struggles of immigrants who don't yet know the language of their new home.

Salas Rivera has been getting invitations to read in all parts of the country, and the poet is looking forward to making a first visit to Tucson.

The poet has already collaborated with UA English prof and poet Farid Matuk. And as former co-editor of the poetry journal The Wanderer, Salas Rivera published the poetry of Sophia Tarazawa, this weekend's co-presenter at the reading.

Terazawa, a student in the UA's MFA poetry program, has already published two chapbooks, Correspondent Medley and I AM NOT A WAR, and serves as editor of Sonora Review, a UA poetry journal. A poet and performer of Vietnamese-Japanese ancestry, Terazawa says on her website that she is "working with ghosts."